Man, I Know What You Did Last Summer. Quick break from the Halloween movies. Shit ton more to go there, god help me. Breaking it up with IKWYDLS. Did not like. Did at one time. Chalking it up to not aging well as you definitely know you are watching a movie in the late 1990s. Twas the curse of Scream. Four out of five horror movies from IKWYDLS up until The Blair Witch Project (maybe even Saw) are the same. Up and coming 20 somethings playing high school/college archetypes that make regular snarky, self-referential statements that say "we're aware of that we are in a horror movie." See Disturbing Behavior, Final Destination, Halloween H20, Idle Hands, The Faculty, Urban Legend, so forth. All the same shit. This was the first of those (and one of the most poorly done) and is more or less a Scream clone without the satire. Worst movie of all time. Can't believe I used to like this shit.

Pros: Solid 90s cast (though none of them are especially great at acting). Decent bit of nostalgia for me. Still remember seeing it in the theater and digging it. Pretty ladies though Jennifer Love Hewitt couldn't be wearing more clothes. Typical outfits include a long skirt/sweater or overalls with a long sleeve. Anne Heche and Veronica Vaughn are both looking fly though.

Cons: The first of about a million Scream rip offs. Soundtrack is insanely garbage. Take the worst song of all time from like 10 decent bands. It's a pretty meh story. No nudity. Kills are meh. Acting is surprisingly bad. As was the dialogue. 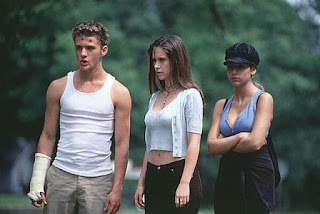 Gist of the flick...Four recent high school graduates--played by Jennifer Love Hewitt (Julie), Sarah Michelle Gellar (Helen), Ryan Phillippe (Barry), and Freddie Prinze Jr. (Ray)--hit a pedestrian coming around a curve on an isolated backwoods road in a fishing town in New England.  Instead of going to the police, they decide to dump the body in the ocean, only it turns out he isn't dead so they attempt to straight up murder him by drowning. A year later, with everyone underachieving, they all start getting letters stating that "I know what you did last summer." Eventually the person writing the letters comes at them, knocking them off, along with a few other people, one at a time.

Written by screenwriter Kevin Williamson who did Scream, Scream II, Scream IV, and The Faculty. Dude was hot shit at the time and every horror movie that came out the four years or so after Scream were all the same, as I've notes several times. Out of the five movies of his I've watched recently, this one is definitely the worst. Directed by Jim Gillespie who hasn't really done anything except for this movie. In addition to the main four, the movie also features Johnny Galecki from The Big Bang Theory which I refuse to ever watch, Anne Heche who has more or less disappeared though she was always great in everything (she seems to have gotten a pretty bad deal for whatever reason), and Bridgette Wilson-Sampras who married Pete Sampras and played Veronica "So-Hot-Want-To-Touch-The-Heiney" Vaughn in Billy Madison.

Not a lot of kills in this movie but the best is definitely the first which is this Max kid who seems to have it pretty rough. He is boiling crab and shit at the fish market alone at night. Killer dude sort of comes up to him head on though this Max gentleman can't seem him very well because of all the steam. But he is trying though. Squinting and shit. When the hook comes in and gets him under the chin and he is dragged over the boiling pots and stabbed repeatedly and what have you. It looks pretty good and I thought the film had potential at that point. But, yeah, there are some pretty bad kills, too. Actually, all the rest of them are bad. Like with SMG who fought the dude off and pretty much got away home free only to look back when she is 10 feet from survival when she is murdered behind a bunch of trash (that should have been recycled).

Best line of the movie comes from Julie after Barry says some dumb shit about how the letters they are getting that say "I know what you did last summer" likely aren't related to the guy they ran over and then tried to drown the year before. His character basically spends the whole movie being extremely disrespectful to everyone and generally just being a cock. Like when he is a dick to Galecki's character, Max, for no reason, I guess because he is nice to Julie and thus trying to date out of his social caste or something, basically shoving the guy's face and screaming "Shots! Get the fuck out of here!" He later assaults dude again when they think he is the one behind the notes and then tells the girls, who look like Gellar and Love Hewitt because they are those chicks, that they "look like shit" just to be a dick. This is all mighty aggressive behavior and dude is always wrong. Anyways, he says something like "You did a lot of things last summer." Julie replies "Yeah, well, only one murder comes to mind." Noice. Julie also develivers the worst line of the movie. A "what are you waiting for" scream to the killer who isn't around. Huffpost did an article on this movie back when where they explain that this was thought up by some kid who won a contest or something, got to be on set, and chose a moment where the actors had to do whatever he wanted (within reason, I assume) and this was it. JLH claims to remember it fondly, though it groan worthy these days, saying “People don’t know that that was just like some kid who loved horror movies... I’m glad I got to do that for him.” That is some pretty cool shit and I am a little bit jealous but it's still a dumb moment. 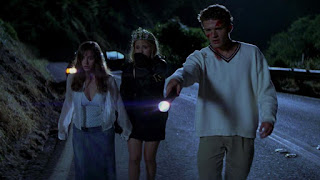 This brings me to a little shit with this flick... So the catalyst for this whole movie is hitting the dude and then attempting to murder him. Why not go to the police since the driver, Ray, was sober as a judge. It's because, according to Barry, no one would believe that he wasn't driving his car. "Nobody drives my car but me," he says at one point. I'm all about cops being full of shit and pinning shit on people and and what the fuck but this is dumb. Four doing alright white kids, at least half of them sober, hit a dude on a dead man's curve, telling the truth which isn't that bad. All this shit is grossly unnecessary. But overall, this post-hitting the guy and what have you, is probably the best scene in the flick. There we see solid inner workings of dumb, adolescent brains in crisis mode. They did some shit and they have to deal with it. Argue about how they should deal with. Do some more, much worse shit, and then have to psychically deal with it for the rest of their lives, which isn't long for exactly half of them. So yeah.

MVP has to be JLH. Before this movie, no idea who she is. Afterwards, she is one of the hottest chicks in Hollywood. She was in that show Party of Five but she was like third banana in that show. This really elevated her to leading (ish) lady status. Of the four kids, she is either first or second in overall performance (Phillippe is alright as well). People sort of realized that she was impossibly good-looking (she was more of a kid in PoF). It didn't hurt that this film really brought in the bucks, gaining $125 mill at the box office. She would parlay this role into the leads in films like Heartbreakers, Can't Hardly Wait (a great teen flick), the sequel to this flick I Still Know What You Did Last Summer, and the show Ghost Whisperer. She really had a moment there and it was all thanks to this role, 100%. 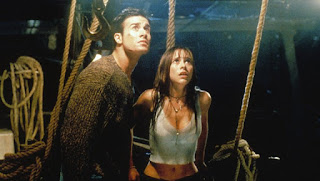 Overall thoughts... Promising start but it drags on and ends with a lot of anti-climax. Gist of that is Julie thinks Ray, they are the last two standing, is the murderer and attacks him. She gets help from a fisherman who ends up being the real killer. They get it on--fighting way, not sexy way--and the killer gets his hand lopped off and flung into the ocean. Spoiler, dude ain't dead. The cops are all, "any idea why this guy is coming after all of yous." "Shit no, officer." And that is that except a little pointless maybe dream bit at the end that they ignore in the sequel which, hey hey, was way better than this POS mostly due to Jack Black and lot of unintentional hilarity. So look forward to that.