Sleepaway Camp III: Teenage Wasteland is the worst movie of all time 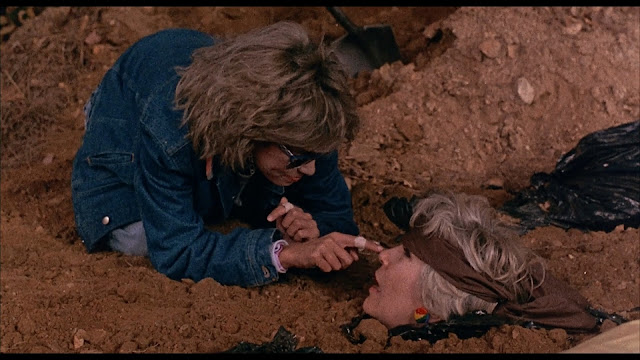 Sleepaway Camp III: Teenage Wasteland. Somewhat more enjoyable than Sleepaway Camp II: Unhappy Campers because of how ridiculous it is but probably a worse overall movie. Since this is worse than that second installment and that is the movie that broke the whole every movie is the great of all time run, gonna have to call it. Sleepaway Camp III is the worst movie of all time.

Pros: Lots of kills (but none of them are really very good). Some pretty ladies. The ending isn't too bad. A few decent moments of dark comedy.

Cons: Makes no sense. Has a bunch of characters that are completely out of place. Everyone is insanely stupid. Hot chick drops an N-bomb for no reason.

Here's the gist. Angela, played by Pamela Springsteen, goes back to the camp where she killed people the year before (might be the camp from the first Sleepaway Camp though), now called Camp New Horizons under new ownership after having killed everyone the previous summer, where she immediately starts killing off other counselors. Same shit, different assumed identity. In this one she mows down this chick Maria (who has the hilarious tattoo "Milk Shake" on her tits) with a dump truck and then steals her name, clothes, and job as a counselor. She even has the same hair as this Maria chick which is unnecessary since no one has ever seen anyone before and no one knows what Angela looks like as she killed everyone in the previous movie. Doesn't get the tattoo though, thank fuck. The film also stars Haynes Brooke as the idiot rapey one, Tracy Griffith as the pelo rojo survivor girl, Mark Oliver as beefcake Tony, and Michael J. Pollard whom I distinctly remember as one of the homeless guys in Scrooged (the one that freezes to death in the sewer [if you remember that]), are all in... irrelevant.


Favorite scene is indeed the most absurd. This comes early in the movie when a newscaster shows up to the camp and interviews all the new counselors, just saying their names and where they are from and what archetype they are and so forth. Well, the newscaster, having just met Angela but being able to tell she knows how to party, I guess, asks her if she can get her coke. She is going back to the city or whatever but needs coke now, apparently. She obviously has a huge problem. Angela ends up selling her Comet which kills her. Having had shit up my nose that shouldn't have been, there is no way that she doesn't get extreme pain in her nostril the second that shit goes up her nose. But this chick keeps doing it and she dead.

A lot of nonsense in this flick. A memorably absurd scene comes in the middle of the flick when it suddenly gets all meta. Here Angela finds a hockey mask in the woods like Jason wears. She then asks what day it is and someone says it's "Saturday the 14th." Wacka wacka. Probably the most unbelievable shit in the movie is that the male owner, played by Pollard, who is a gross old man married to this gross old lady ends up doing a very attractive counselor with fake breasts even though he is like a 1/10. This gets them both killed, by the by. The wife, meanwhile, gets buried up to her neck in trash and then Angela mows over her head with a lawnmower. More insanity is this black gang member guy that "works" as a counselor at the camp. This guy is crazy aggressive and refuses to do shit. The owner of the camp asks him to do shit and he is all like, "fuck you, bitch, suck my dick." Not really the way you keep a job. Plus that shit is racist as fuck. 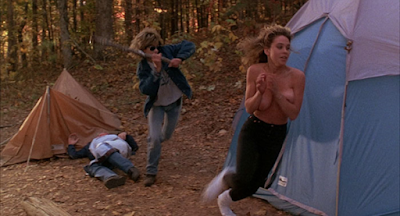 Speaking of racism and attractive females, this one chick out of nowhere drops the N-word in reference to that aggressive prick. For this Angela strings the girl up on the flagpole during the trust walk and drops her on her head from the top, killing her. It's pretty lame. Despite this, the racist chick, played by one Kim Wall, is indeed a pretty lady. As is Jill Terashita, the Asian one, whom you may remember as the attractive Asian chick in Night of the Demons. She dies, too.

MVP for this one is more or less no one because everyone phoned it in. I guess maybe the aggressive black guy or the red head survivor girl who seemingly kills Angela. She beats down Angela like a wild woman and ends up stabbing her in self-defense. When it is going down you think this is it for Angela, sort of, but you are wrong as we see in the last scene that she is in an ambulance coming t, killing the EMT and making her escape.

And that is Sleepaway Camp III: Teenage Wasteland, a real piece of work. So, uh, you know. Don't cry. Don't raise your eye. Only one more of these movie left to go as I can't find Sleepaway Camp IV: The Survivor anywhere. This seems just as well since it was released in 2012 after mostly being shot in 1992 as test footage with spliced archival footage from films I-III. Not going to count this garbage, whatever it is, as a real movie. Am looking forward to Return to Sleepaway Camp which ret-cons the other sequels. It is also the only one with involvement from original director Robert Hiltzik. So, yeah, should be fun(ish).