Return to Sleepaway Camp is the worst movie of all time 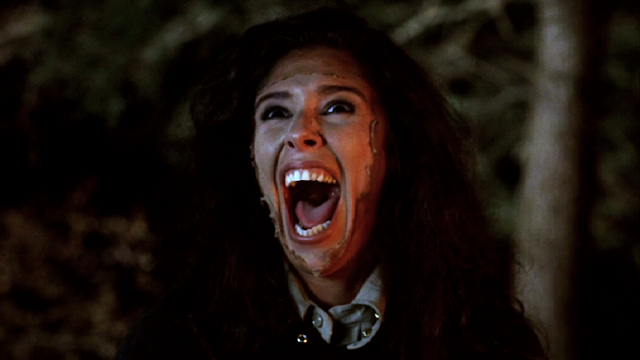 Return to Sleepaway Camp. Jesus Christ. I was excited to see this after the pieces of shit that were Sleepaway Camp II: Unhappy Campers and Sleepaway Camp III: Teenage Wasteland. Thought this one had potential as it was handed back to original Sleepaway Camp writer/director Robert Hiltzik since that first one, though completely bonkers and over-the-top, was actually pretty enjoyable. This film was not in any way whatsoever and managed to offend and annoy me on multiple occasions which isn't all that easy of a thing to do (don't fucking have violence towards animals, that is all I fucking ask). Return to Sleepaway Camp is unwatchable trash. In fact, this is the worst movie of all time. 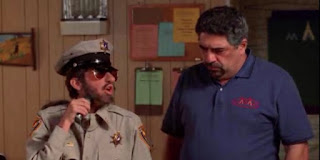 Pros: Much of the original cast returns. Ret-cons the second, third, and I guess fourth movies that were just completely terrible.

Cons: Might be legitimately the worst of the series. Animal cruelty. Nearly every character is loathsome. Fat shame the shit out of the dip shit protagonist (who is pretty terrible). Kills are borophyll. This shit ain't funny. The twist at the end is fucking terrible.

Getting gisty with it here... A truly insane amount of bullying is slowed down temporarily after the body count at Camp Manabe escalates to alarming proportions. But camp counselor Ronnie, played by Paul DeAngelo who reprises his role from the original, is on the case... He totally suspects Angela who committed a similar series of murders at the same camp when under a different name/ownership and enlists the help of Angela's cousin, Ricky Thomas (played by Jonathan Tiersten). Only problem is, Angela is in prison (or mental institution or whatever). Ricky assures us he just visited her a few days ago. Must be one of the kids at the camp. Spoiler. It's not.  Mixed in with the cast of mostly unknowns are Scientologist Isaac Hayes (released after his death) whom you know as Chef from South Park, Vincent Pastore aka Big Pussy in The Sopranos (at one point an out of control kid he grabs yells "let me go you big pussy", and Lenny Venito who is one of those "oh, that guy" guys. 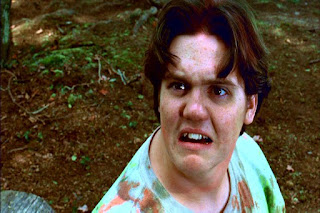 Most of the film follows the goings on of this tubby kid named Alan who is obviously much older than the others who is stinky, dirty, dumb, and kind of an aggressive prick. He tools on the littler kids and talks about a girl at the camp in a total stalker way like she is his girl friend. She is not and wants nothing to do with him and even does some super fucked shit to him that would probably get her and others arrested and called out on the local electric TV news machines these days. A lot of the horrific taunting or bullying or whatever included his brother who is fucking loathsome and skins frogs, the fat kid's only friends, for fun. I fucking hate that dude and was pretty alright when Angela skinned him at the end of the movie. Like, the dude is pretty terrible, but his life here looks rough as hell. The skinning his frogs thing made me nearly puke. So there is that. Then there is this scene where his bro and his bro's paintball bros stalk him through the woods and light his ass up. Who enjoys this shit?

Yeah, well, hard as shit to watch... But at least the movie is consistent, unlike with II and III which has Angela just killing people willy-nilly. In this one they at least have to break the rules of camp to get the wrath. When the stoner dude, a real prick, rolls up a turd in a joint and the fat kid smoke smokes it, he gets gas poured on him and his ass gets torched. And the bro getting skinned. I historically have had a thing for ironic punishment, Dante calls it contrapasso, I wrote numerous papers in college on this and think it is really cool, so this isn't too much of a surprise. 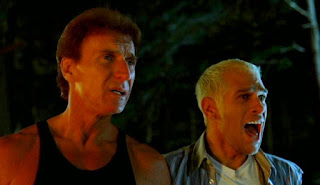 MVP is Paul DeAngelo. It was sort of nice seeing him, the sort of hero in the first one (he plays Ronnie, the head counselor), agian. He is a pretty absurd character and pretty much is Ken Marino from Wet Hot American Summer. He clearly loves being in this flick and really swings for the fences. He does a good job in an otherwise unwatchable flick. I'd say the same for Jonathan Tiersten who plays Angela's cousin, Ricky Thomas, in the first one and reprises the role in this one. Both of them were good shit and I wanted more of that. Also, one of the reasons the movie really sucked is that they didn't really utilize Felissa Rose as Angela as she only appears as herself in the last scene of the movie which makes no fucking sense. The rest of the time she is dressed up as this male cop with a voice box, that is obviously Angela from the moment we see him, preaching an anti-smoking message to the kiddos. But in the final scene, just like the first one, we see only Angela and it is pretty terrifying. Here she cackles like a mad woman after having killed more or less everyone, again, and sort of snaps at the camera with a dead-eyed stare. Those were about the only things in the movie I liked and that last bit was still pretty dumb and incoherent although it does send shivers down the old spine.

These Sleepaway Camp movies, especially this one, are not worth your time. The first one is okay but they just keep going down hill from there. It's crazy that I was looking forward to this one. Had a lot of hope but Jesus fuck, man. This whole experience was unpleasant.

Terrible review what you dont like someone else loves ya fairy.

Calm down Snowflake.
It's just a movie, the animals didn't really die.