Halloween III: Season of the Witch is the greatest movie of all time 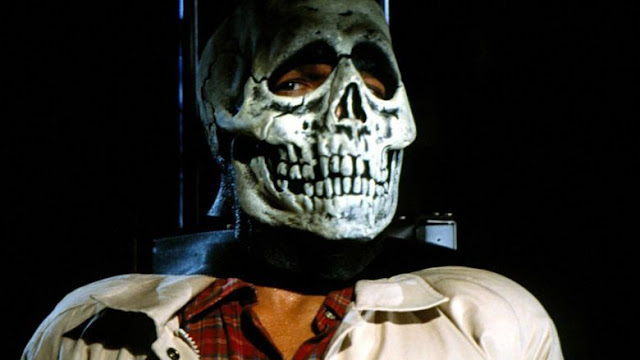 Halloween III: Season of the Witch. No Michael Myers. No Dr. Loomis. No witches. Confused? You're not alone. No one understood it when it came out. The franchise was supposed to be anthology at this point since Myers is dead and all. Always heard it was a box office bomb but it made five times its budget. Critically it mostly bombed. It is out there, for sure, and doesn't make complete sense but it's super interesting and more fun than most of the movies in the Halloween franchise. If I were to rank the three films in the series up to this point, I'd actually put this above Halloween II. Below Halloween, of course, which is weird since Halloween III is the greatest movie of all time. 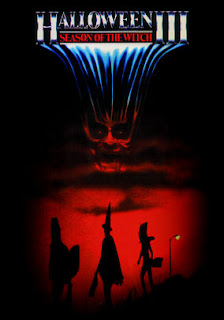 Pros: Holds up great on its own. Way the fuck out there (in a good way). Tom Atkins is great. His cute little female companion is pretty solid as well. The villain(s) do a good job of going from over-the-top and humorous to creep city. Sick poster... Just look at that shit... Incredibly solid John Carpenter score.

Cons: Not a Halloween sequel should be stressed but isn't (though I think everyone knows this at this point, 36 years later). Sort of hard to follow. Not everything plot wise makes all that much sense. Ending is dark AF. That Silver Shamrock song set to the tune of "London Bridge" they play 15-20 times in the movie will fucking stick with you.

Gist of the thing... We get one Dr. Dan Challis (played by Tom Atkins whom you'll recognize from such classics as The Fog [1980], Escape from New York, Creepshow, Night of the Creeps [a personal fave], and Lethal Weapon [he was Michael Hunsaker]) who decides to play detective after a costume shop owner comes into the hospital and prattles on about how "they" are going to kill everybody. Once that man's skull is ripped apart by an automaton who self-immolates in the parking lot, his daughter, Ellie Grimbridge (played by Stacey Nelkin), joins him for some mystery solving and coitus in the nearby town of Santa Mira, California, a town famous for Silver Shamrock Novelties which completely runs the town. The company/town is run by this evil Irish warlock (maybe???) dude named Conal Cochran (Dan O'Herlihy whom I know as Andrew Packard in Twin Peaks). At one point we get a tour of the company's hall of fame and hear about their greatest hits which include sticky toilet paper (hilarious), the soft chainsaw, and the "dead dwarf gag" which sounds disturbing. They also make three sweet-ass masks that have little magic chunks of Stonehenge (which they have stolen and is approximately three times larger than it is IRL) that kill people when they watch a certain Silver Shamrock commercial or fuck with the chip in the logo as part of a culling ritual for the Celtic festival, Samhain. The mask kills are crazy. They basically turn people's head into pumpkin goo and bugs and snake come out and kill anyone else that is nearby. They really go out of this horribly.

Written and directed by one Tommy Lee Wallace who worked with Carpenter a bunch previously and was married to childhood crush Nancy Kyes/Loomis who plays Atkins's wife who is fed up with his shit. Wallace would go on to do Fright Night Part 2 and It (the 1990 miniseries version) which are both "great" flicks I remember super fondly from childhood that I should probably revisit at some point. Other notable actor appearances besides Atkins, Nelkin, and O'Herlihy include Jamie Lee Curtis in voice only as the Curfew Announcer/Telephone Operator, Joshua John Miller (he plays one of Atkins's kids) who wrote an insanely dope movie called The Final Girls with Malin Akerman (me-ow), Thomas Middleditch, and Alia Shawkat (among others) which is a meta horror flick with a lot of dark humor that I fucking loved, and stuntman/Michael Myers in Halloween II Dick Warlock who is one of the Ken doll assassins.

Favorite line of the movie is "It's getting late. I could use a drink." Never has a phrase so perfectly summed up a character than those eight little words. Dude is a drunk, you see. Which brings me to...

There are a bunch of gnarly kills in this one. Homeless guy gets his head ripped off. Always solid. Dude gets skull ripped apart like "The Mountain" did that other dude in Game of Thrones. Kids head turns to mush, bugs, snakes, so forth, which then come out and kill his parents. A guy lights himself on fire. All that shit is great. But the best one comes to good old Marge Guttman who introduces herself, first and last name, to Grimbridge, where she is from, what line of work she is in, and that Grimbridge should "look her up" sometime. This all with an economy of language, in less than six seconds of screen time. "What the hell is that about," I ask myself. She is so going to die, that's what. Her deal is she has a kid back home in San Francisco, another detail we get from that information packed introduction, who she picked up a new mask for even though she had them at the store and what not. Anyway, the little Silver Shamrock logo pops off. So what she does is takes it apart and finds a little circuit board underneath it and starts fucking with it. As she pokes at it with a hair pin, this whilst Atkins and Grimbridge enter the bone zone, a laser shoots out and hits her in the mouth. When they cut back to her shit is all fucked up. Her face is completely jacked and all the bugs and snakes and shit come out and finish the job. It is gross and disturbing and excellent.

Some shit with this movie... Atkins is so over-the-top. Love that shit. First off, horrible doctor, father, husband. Major drunk. Brings a sixer or a 40 oz with him wherever he goes. Even drinks whilst on call. Chicks still love him though as he has banged at least four chicks in this movie and it would seem possibly every female that works at this hospital. The four chicks are the black nurse who he tells he should have married, the coroner whose ass he grabs, Kyes who is his wife or exwife or whatever, and the daughter of the crazy guy who is like 30ish years his junior. After he has boned her a couple of times he finally asks her how old she is. "Old enough," apparently. 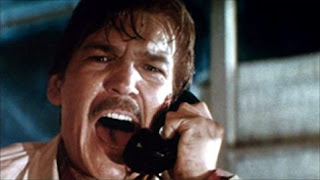 The ending of this movie, spoiler, is also insane and has a lot going on and is also my favorite bit of the movie. It goes thus: Grimbridge was captured by the Silver Shamrock people and dude obviously goes to save her, escaping from his own captivity by die harding his way out of his one-room prison through the air vents. They sneak around the building by pushing a rack of masks so no one can see them which totally wouldn't work. That is when Atkins gets how to defeat the bad guys. The big plan, we see, is to randomly hit buttons on the big computer in the warehouse where Cochran and all his minions have gathered which brings up the commercial. Atkins then takes a box of the circuit logo things and dumps them on the guys, which leads to chaos and kills them all. Atkins and Grimbridge then take off to warn everyone but it turns out that she is a robet and attacks him causing them to crash the car and her to lose an arm. He beats her with a tire iron until her head pops off. He gets back in the car and is attacked by the severed arm. He pries it off eventually and then is immediately attacked by the headless body. Ridiculous. Finally he runs to a gas station and makes a call to god only knows who, whoever plays all the commercials on all the channels or something which obviously isn't a thing, telling whoever is one the other end to pull the Silver Shamrock ad as it is going to kill everyone. They get it done on two of the three networks but it starts to air on the third with Atkins screaming for them to "turn it off for god's sake, turn it off!!!" while children sit there and watch it right in front of him. Yeah, it's dark and bleak as hell.

MVP is... Drum roll... Michael Myers. Huh? Yep, that is right. No more of this bait and switch bull shit. This cemented that Michael Myers was the franchise and would be in every damn one of these flicks from here on out. They'll retcon him, kill him off, resurrect him, reboot him, and retcon him again if they have to but he will be in the movie. So no franchise as an anthology. Too soon. Too out there for 1982. Franchise financier Moustapha Akkad who had the rights to the character would make sure Myers was the killer in all the movies from then on out, even bringing him back, awkwardly, after he got his head chopped off in Halloween H20: 20 Years Later. The rest is history and now we have all the sequels where Myers becomes more Jason like with each passing installment. So looking forward to that shit. Also, my dude Joe Bob Briggs did a sweet Monstervision for this installment of the franchise. Love the shit out of Joe Bob. Enjoy.