Green Room is the greatest movie of all time 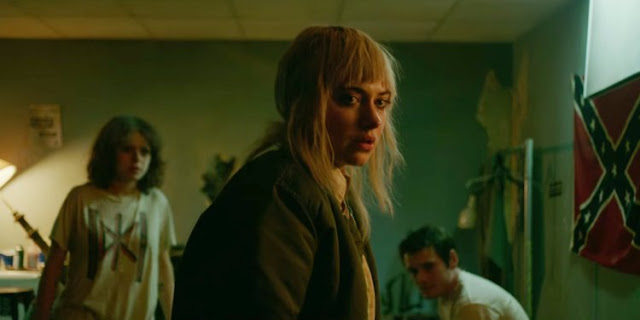 Green Room. Movie is good shit. Of the two movies I've seen from director Jeremy Saulnier, this and Murder Party, both are out of the park (gonna have to watch his other film, Blue Ruin, as well). While Murder Party had a literal $0 budget, Green Room is obviously spending some coinage as this cast is dope and not at all amateurish and includes Sir Patrick Stewart. The movie is intense, brutal, has a solid storyline. It is the greatest movie of all time. 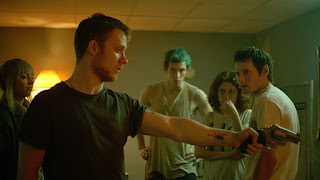 Pros: Super engrossing with highly tense situations. Nice premise. Patrick Stewart! This guy brings it. Rest of cast is solid too. Little bit of unexpected humor in there as well.

Cons: Not super taut. A couple of things don't make a lot of sense. Pretty violent. 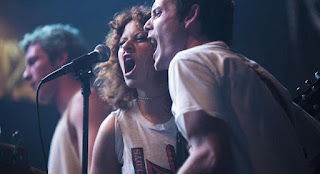 Gist is a bust of gig, a band of struggling punk rockers lands a show that they are warned is a little different that ends up being at a neo-Nazi venue where they play a song with the hook "Nazi punk fuck off" which the Nazi punks consider confrontational. They are run off the stage early, back into the green room where a murder has taken place. They lock themselves in and the movie then turns into a very much nontraditional home invasion flick. Reminds me of a Trump-era Your Next, also a home invasion movie with a twist, if you are familiar with that masterful piece of cinema (though it came out before all the Trump supporting racists came out of the woodwork). Directed by Saulnier, whose shit I fucking love and seems to be the new Ti West, has cemented himself as a dude whose flicks I will anticipate for sure. Staring in the film are Macon Blair (a favorite of Saulnier) who was in Blue Ruin and Murder Party, Imogen Poots from films such as 28 Weeks Later and Need for Speed, Alia Shawkat who is Maebe in Arrested Development and was in Final Girls which was one of my faves from the last few years, the Patrick Stewart, and Anton Yelchin, known for Alpha Dog, Hearts in Atlantis, and Star Trek, in one of his last roles (he died in a freak accident in 2016).

Only true complaint about the movie is that some shit that doesn't add up is why exactly the girl they stumbled upon with the knife in her head dies in the first place. I guess they sort of explain it but it is super confusing. Then the dead girl's boyfriend, also a Neo-Nazi, flips sides and starts helping the green room peeps. This too makes no real sense. I mean, it is sort of explained, but that explanation is hard to follow and pretty weak. 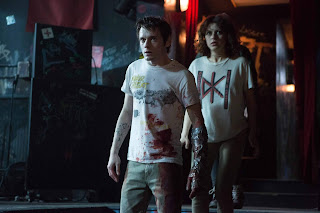 There are a lot of times in the movie where things appear to turn the green room people's way but then doesn't which really gets you. Like when that guy flips sides. He has info on what is going down and how they can survive and what not but then dies immediately. Bummer. Then when the group gets a shotgun you think they are going to at least take some people out. But that does no good either and ends with a horrific death.

Best scenes of the movie are also some of the hardest to watch. Like when Chekov (Yelchin) and the rest of them negotiate with Stewart and the Nazis, the gun for getting out alive, when the skinheads double cross them and nearly cut off Chekov's hand. The most satisfying scene though, in a movie without many of them, comes when Poots and Yelchin's characters are the last two standing from the room, spoiler, and they stop "playing war" and start using their noodles and do some real damage. Also like the scene at the very end when everyone is dead and this dying pit bull that has killed multiple people finds his Nazi owner, who is dead, sidles up to his guy, lays down with him, and presumably dies. Even though the dog is a terror and his master is a Nazi, I was still touched by it... Dogs are just so goddamned loyal. 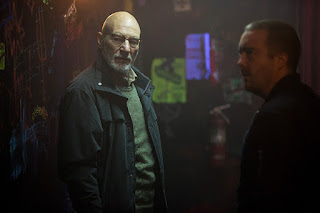 MVP here is Stewart who elevates the film from punk indie to legitimate hard-hitting thriller. His Neo-Nazi is truly impressive. He is always sinister and not to be trusted. He comes off as a real leader in a totally different way than he does as Dr. Xavier. He is a Shakespeare villain who is awesomely intense and wicked. This movie probably works without him but it's not nearly the same level of film with broad appeal.

That's Green Room. You definitely should check it out. I'm pretty stoked for to watch Saulnier's other movie, Blue Ruin, as well as his new flick that is due out next month, one Hold the Dark which is coming to Netflix. It starts Blair (of course), daughter of Lisa Marie Presley one Riley Keough from Mad Max: Fury Road, Alexander Skarsgård (Skarsgård the lesser) of The Legend of Tarzan (not the Skarsgård from It which is his bro), and Jeffrey Wright from Westworld among other things. So, yeah, that shit is definitely on my radar.