Sleepaway Camp is the greatest movie of all time 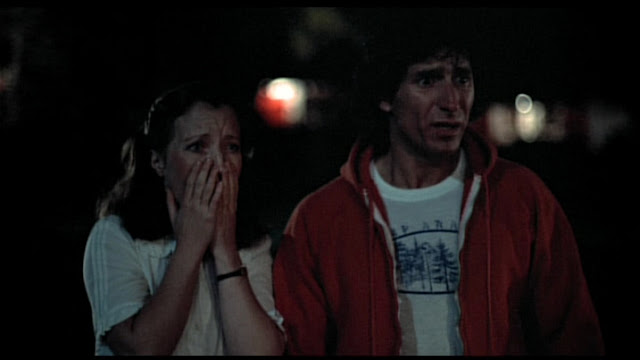 Sleepaway Camp. Another franchise. This one goes fantastically off the rails. This first one. Wow. The ending is fucking insanely shocking and comes out of nowhere. The second and third installments, at least, ignore that ending and basically everything that goes down in this first flick except that someone named Angela who looks vaguely like Sarah Silverman kills kids at camp. But yeah. This movie is insane and shocking and in fact is the greatest of all time. There is a fucking crazy spoiler here but basically everyone fucking knows it by now. The movie is almost as old as I am after all.

Pros: One of the most memorable movies I've seen. Smart and well set up. One of the best reveals in all of horror. Great setup for that shit too. Campy as fuck and completely unique. The Angela actress is super solid. 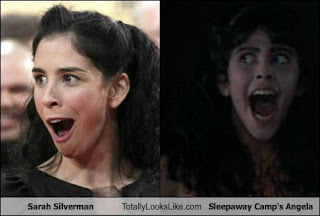 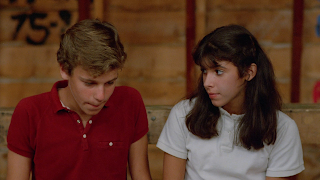 Here we go. The movie is about a young girl, one Angela Baker, played by one Felissa Rose who looks like a young Sarah Silverman, apprehensive and disturbed, who goes to Camp Arawak with her cousin Ricky, Jonathan Tierston who looks a lot like a child Tony Danza, where people with dubious intentions start dying in gruesome but often times explainable ways--scalding by boiling water, drowning, bees ("not the bees!"), so forth--before things really escalate as the movie eventually ends with insanity. Angela is all disturbed and what not after her family is killed in the opening scene in a boating accident which is why she lives as a second class citizen with her insane fucking aunt who is way over-the-top and cousin, who seems nice, actually. If it weren't for the outrageously shocking ending, it is unlikely the movie would be remembered at all. But that sure as shit was one hell of an ending. Besides Rose it is unlikely you are going to recognize anyone in this movie though there is an actor of note in Robert Earl Jones, who isn't so much known for his work but for his progeny James Earl Jones. Yep, Darth Vader himself.

The weirdness begins at ground zero of this flick, starting out with a strange dedication at the beginning before the opening credits. It reads In fond memory of mom. A doer." Uh, what the hell does that mean in this context? Could you imagine dedicating this POS to your dead mom who was apparently a real go-getter. That's how we enter this strange world.

One thing you will notice right away here is the insane, over-the-top aunt who is fucking nuts and talks like a crazy person. She orates like Judd Nelson in The Breakfast Club when he is mocking Anthony Michael Hall's perfect family but also in a horrible community theater sort of way. This bitch is a little much. But this performance is totally intentional as we see later that she is fucking disturbed. A little important nugget we are supposed to retain is that she is a doctor and has faked Angela's physical. 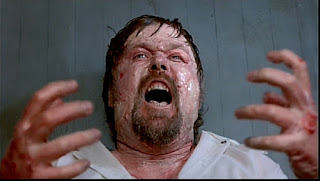 Flick features one of the biggest pieces of shit I've seen in a while that says something made me nearly retch. So this guy, the head cook at the camp who is 40 years old, stands out in the parking lot as the kids get dropped off by their parents and take their shit to their bunks. This guy openly checks out these kids who are like 12 and comments on them to his all male coworkers while practically stroking himself. The thing he says that was fucking disgusting was something like "look at all that fresh chicken." Fucking gross. Fuck this guy. And his coworkers are like cool with this and shit. Fuck them too. He immediately then tries to sexually assault Angela, again, like 12, by taking her into the storage room and forcing himself on her. He is undoing his belt when the cousin comes in and goes ape shit. He claims he's not doing anything while zipping up his fly and flying into a rage... and everyone believes him! Since trying to rape a child is totally fine in 1983, the guy is just making soup in the next scene in a like 10 foot tall pot that I'm pretty sure wouldn't cook shit. But the water boils and what not and we get a POV of the killer pulling the chair the guy is standing on out from under him and he ends up sort of hanging over the pot, eventually, and unnecessarily, falling on top of it and pulling it down all over him. He screams hysterically for the rest of the time he is in the movie.

What I considered to be the most absurd (and probably my favorite) scene in a movie that is just god damned full of them is the baseball scene where the 30-year-old actors playing 18-year-old counselors play against the legitimately 12-year-old campers. They show pretty much this whole game in real time. It is fucking insane and super polarizing. The jorts game and shit talking is on point. At one point one of the adult dudes is like "eat shit and die, Ricky" and Ricky retorts, "eat shit and live," which is nonsense but awesome. Eventually it breaks out into a fight with the adults basically assaulting the children as the head of the camp watches on, not giving a shit.

The camp owner or whatever is a real piece of work as well. Played by 60-something-year-old actor Mike Kellin who was literally days away from death and totally looks it, the guy is boning one of the counselors. She is supposed to be 18ish as she is a legit camp worker. I mean she is fucking terrible and all and takes every opportunity to tool on Angela for whatever reason. What is crazy is that she is super into it. Brags about having a date and what not with this gross old man. Fucking wild, this movie.

The murders are all pretty cray. My personal fave is also, not coincidentally, the most homoerotic. There we get this rapey asshole on a boat that has previously tooled on Angela for being weird, basically. Well, he ends up taking this chick out and purposefully overturns the boat. She swims back pissed while the dude sort of chills under the capsized boat. Meanwhile, his dude friends skinny dip and play grab-ass for no reason. That's when the killer shows up and says something like, "the rest of the boys will be glad to see you." Again, rape vibe. But the killer, Angela, spoiler, has none of that and drowns him. The next day when they find his body with snakes coming out of it and shit, that idiot camp owner dude is all about explaining away all the suspicious deaths which is most of what these movies are, the owner coming up with weak excuses before eventually getting killed himself. In this one, the EMT or whatever is like, "we'll have to wait for the medical examiner to check him over before we can know what happened." The owner just starts acting like a dick and comes up with his own theory of how he hit his head. EMT says, verbatim, "I don't think so. Weren't any bumps or bruises when I checked. Though again, I'm no expert on this matter." So this old guy just bullies him, yelling something like "the boy scared and panicked. Right?" And the EMT says "that could be a logical explanation." And that is fucking that. Case closed. 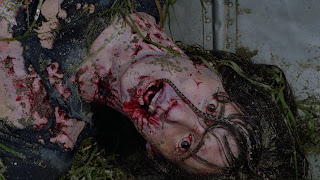 And then there is the last scene. Spoiler. It's fucking cray. The surviving councilors have figured out who the killer is and are going to stop her. That is when we see Angela making out with her shitty little rapey boyfriend. The councilors are like, "oh god, no!" and the camera pans out. And that is when we get the shocking reveal. Hissing, mouth agape, severed head of BF in hand, tiny penis dangling there--Angela is a dude. The boy at the beginning of the movie whom Ricky's mom has turned into a chick. And this forced sex change and confused sexual identity, which her dad is also revealed to have struggled with, as well as an incestuous encounter with the sister has led to Angela being a murderous wild woman.

One thing though... So... this ending is pretty problematic. Nor does it what you would call age well. Angela is basically portrayed as nonhuman with her insane hiss and face fixed in a permascream which is supposed to be even more terrifying when it pans out and we see the penis. More than anything, now, it comes as an out of nowhere shock for being transphobic. Basically, this movie equates Angela's psychopathy with her quote unquote confused gender role. It's not Ace Venturabad but basically the reveal was meant to be shocking in and of itself is the one of many movies that portray the trans character as a psycho that just loves killing. Most trans people, as it turns out, aren't this way, but you would never know it from movies from the 60s, 70s, and 80s.

Nonetheless, MVP has to be Rose who does one hell of a job with what is not an easy performance. Shows a lot of range as we see her as both a vulnerable kid and a terrifying psychopath. Plus it can't be easy to take on a role like that as a teenager in the 80s. And she grew up to be a beautiful woman who seems more or less pretty well adjusted. Ricky also does a hell of a job for a kid and the jacked camp councilor was over-the-top but cool. Overall, a dope fucking movie.