Scream 4 is the greatest movie of all time 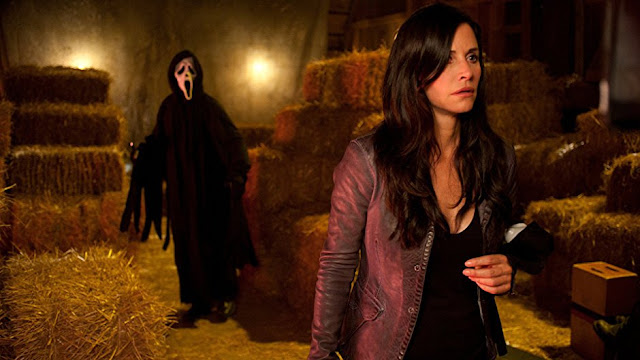 Scream 4. Probably the last one in the franchise. Scream popularized the whole "meta, self-aware, postmodern" horror genre. Basically every horror movie that came out there for a while was a total Scream clone. Basically came out and defined the genre. Literally did this in the flick even. Scream 2 came alone and did the same thing for sequels. Then with Scream 3 we sort of get that with trilogies but maybe not so convincingly. Now we get this one that attempts to do the same thing with reboots. And though it generally didn't get the best reviews, it totally works. All that negative ink is a bunch of bullshit because Scream 4 is the great movie of all time. 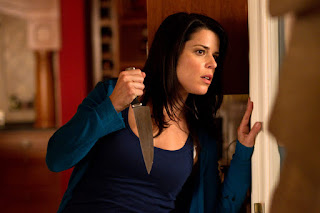 Rotten Tomato Consensus: The franchise is showing its age, but Scream 4 is undeniably an improvement over its predecessor, with just enough meta humor and clever kills.

Pros: Wes Craven directed. His last picture. Great cast. Maybe the best of the franchise (though the first one had a pretty great one as well). Also some pretty ladies. Do a really good job of world building/character development. Though we've seen this same setup in this same time, it totally throws you for a loop with it's originality.

Cons: More brutal than the previous movies, which is quite the dubious achievement. The killers' motivations/whole murder plan is pretty bonkers.

You likely know the drill by this point. The gist is Sidney Prescott shows up somewhere, in this one her home town, Woodsboro, where the first movie took place, and the Ghostface killer(s) soon follow. This time it is 10 years later and the murders seem to revolve around Sid's cousin, Jill (played by it girl Emma Roberts from Scream Queens, among other things), much like they did with her back in the day. David Arquette, Neve Campbell, and Courteney Cox return as Dewey, Sid, and Gale Weathers, respectively. Gale and Dewey are married now. Women fawn over Dewey who is the sheriff now, god help us, who no longer has a limp or quite as much brain damage. Newcomers to the series include Roberts, Anthony Anderson, the lovely Alison Brie who will always be Annie from Community to me, Adam Brody, Rory Culkin, Marielle Jaffe, Erik Knudsen, Mary McDonnell, the also lovely Hayden Panettiere, Marley Shelton, Nico Tortorella, Aimee Teegarden and Britt Robertson. We also get cameos from Kristen Bell and Anna Paquin, a former Academy Award winner, as characters within the Stab universe. Kevin Williamson, who wrote the first two, returns as the writer and knocks it out of the park. I would argue that this is why 1, 2, and 4 are considered solid to classic and 3 is generally considered shit. It is also the final film from horror master Wes Craven who died in 2015.

Like all the other Scream movies, the opening is significant and does most of the world building. The opening of the actual movie are the openings for Stab 6 and Stab 7 which we sort of got in Scream 2 but in this one you think this is actually the opening of the movie we, the audience, is watching. But twice we are tricked with the movie within the movie withing the movie. It is a bit confusing when you try to explain it, I realize. Basically, here the Stab flicks like Scream are also in need of a soft reboot and sort of go off the deep end. We see the Stab movies have gotten stale and turn toward the uncertain. There we get just a bunch of nobodies in 6 doing the same old shit. Then big name actresses in 7 just phoning it in in an unpredictable movie that is unpredictable because it has sort of gone stale. Hey, that is just what Scream 4 is! This explanation is all over the fucking place. You'll just have to watch it for this to make sense, I think. Anyway, we eventually get the real intro. It's Coach Taylor's daughter, Julie, from Friday Night Lights (the series) played by the actress Aimee Teegarden, and some other chick. Since this is a Scream movie, we know the semi-famous person at the beginning is going to die, horribly. And... she does (and so does the friend). First, the friend is stabbed in the stomach and arms half a dozen times before being thrown through a window and then finally hanged from a ceiling fan while Teegarden gets stabbed a shitload of times before being crushed by garage door like whatsherface in Scream and then is stabbed some more.

Speaking of brutal deaths, this flick is full of them. Every single death is more gruesome than the most severe in the first three--probably the Drew Barrymore death. And they look fucking real, too. Some of the notables include Sid's assistant or whatever played by the lovely Alison Brie who is toyed with like the old cat and mouse thing before she is stabbed and thrown off a parking garage onto a van, the boyfriend, red herring guy who gets shot in the dick and head, and Emma Roberts's next door neighbor sort of friend, one Olivia Morris, who gets the shit stabbed out of her including a bunch of defensive wounds which they show Psycho style before she gets gutted. And a note on Psycho, that movie gets another nod with  Anthony Anderson's (from Blackish) character who is named Anthony Perkins after the actor who played Norman Bates. His death is also notable for being hilarious. For his demise, Ghostface runs up on him and stabs him in the forehead. He gets out of the car and takes some wild swings at GF that is nowhere near landing, falls to his knees and says "fuck Bruce Willis."

The body count is a little higher in this one than the previous films. I don't think that it is a coincidence that Dewey is now the sheriff. So everyone is fucked, obviously. Some issues arise here with his incompetence, which is expected. First off, he is back with Gale/Courntey Cox who is back to looking fantastic. They are married and she has writer's block (she is the Stab author in this universe). But once the murders start back up, she is fucking in it, trying to get in as much of the action as possible. But Dewey fucking denies her, saying she isn't a cop and can't be on the scene or whatever. She says shit like "I wrote the book on this," which is a killer line, but she still gets denied. Part of this I'm sure has to do with Dewey's deputy who is a cute chick that wants to fuck that fucking hates Gale. But, you know, she legit isn't a cop and shit. That shit though doesn't fucking matter, apparently, since Dewey lets Sid lead the fucking investigation for some insane reason. It is fucking nuts. This guy is an elected official. Let that shit sink in.

A few scenes that stuck out... One, the whole Stabathon that the high school AV club hosts where Gale puts these hidden cameras all over the place. Before they have it, Gale and Sid are visiting these HS kids and they float the idea of the two of them showing up to the film fest. The two of them are like, "this is in extremely poor taste, so how about no and you not do this." The kids respond with, "lame, we doing it" and then Gale ends up coming incognito anyway. She is wearing a mask so it isn't a "hello, fellow students situation," but it is pretty close. It is like the first movie where they have the hidden cameras all over the place and they can see the killer coming after one of the main characters. In this one, they damn near get Gale (and Sid later in the movie) but of course they live on in the Screamverse. But the scene is memorably tense and drawn out with a bunch of that the-killer-is-behind-you goodness.

That shit leads to another scene that really stuck out as the main kids that are still alive, around six of them, go to the cheerleader one's house to finish the horrorfest. There, a Culkin boy, Rory, nearly makes nerd history, they say, when Hayden Panettiere, a pretty lady, comes onto him and encourages him to make a move. She is indeed a very attractive lady, and even though he is the killer, spoiler, or one of them at least, and is boning the other, spoiler (it's Emma Roberts), he still nearly does it. But he's cock blocked by the red herring, Roberts's ex Trevor, who is just sort of a dick. Plus, he's gone too far by this point. That whole shit also hearkens back to the first one as well but with some major twists that are bananas and are easily some of the best moments in the series. Their motivation, by the way, are fame and lulz, basically.

The MVP of the flick has to be Emma Roberts. This flick elevated her to scream queen status and even got her a staring role in the television series Scream Queens which I found to be pretty solid as well American Horror Story. Her final girl status in the film is pretty mind bending. A unique take that turns what the expected upside-down. The shocking reveal at the end illustrates how far people will go to become reality stars, a pretty solid social critique of the Kim Kardashian/Paris Hilton model for fame as well as our collective obsession with serial killers and mass murderers. The performance is super solid and the character totally believable. 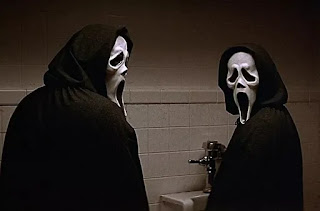 And that was the franchise. With that I guess I should rank them... IMO it goes Scream, Scream 4, Scream 2, and Scream 3. Can't beat an instant classic in the original which completely changed horror for the next decade and saved the dying genre. Though it doesn't get the credit, Scream 4 popularized the soft reboot in ways that went beyond horror, much like the first one did with teen movies and meta, self-awareness in film. If you are going to do a soft reboot, don't just tell the same story and don't completely reimagine it either. Give the people the movie they liked but take it in unexpected places--with a mind blowing twist, basically. See Star Wars: Episode VII, Mad Max: Fury Road, Jurassic World, and Terminator Genisys. All follow this model. Before that, it was all hard reboots like Halloween, Spiderman, and Star Trek which just shit on everything that came before and retold the same story. Next we've got Scream 2 which sort of defined the rules for sequels. A lot like the first one, it laid out the tropes and knocked them down to make for a super solid followup. Scream 3 tries to do that same shit with trilogies but is sort of all over the place and somewhat fails as the plot makes a little less sense and the shtick gets a little old. So yeah, 1, 4, 2, 3. In that order. Guess I should go back and do Nightmare on Elm Street and Friday the 13th as well, so look forward to that.