Scream 3 is the greatest movie of all time 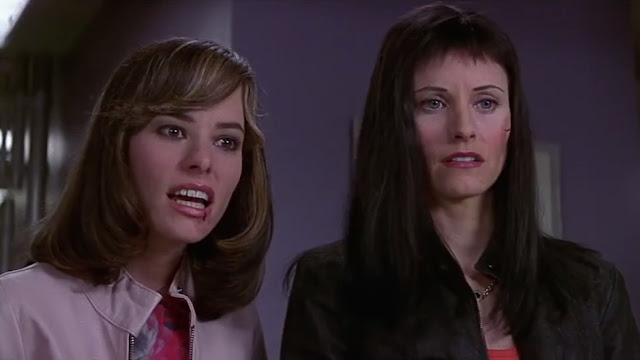 Scream 3. End of a trilogy. The quote unquote shitty one. The one where Sid is off the grid. The one where they broke from screenwriter Kevin Williamson's (who wrote the first one and outlined the second) vision. The Hollywood one where they film the third Stab movie within the third Scream movie. The one in the Jay and Silent Bob universe (the duo sees Gale Weathers on the backlot and yell, "hey, it's Connie fucking Chung!"). Lots of in jokes like that here. This is an industry movie like Body Double or Theater of Blood or Sunset Boulevard. 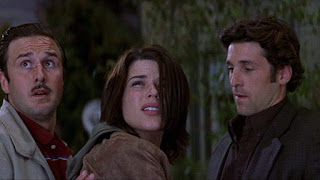 Personally, it was the first movie in the franchise I wasn't stoked about. It was only a couple years since the previous one came out but it both felt like it had been too long and that we had just had a bunch of these come out. Probably the reviews didn't help. It's pretty cheesy and way out of left field. Plus the new big thing in horror in 2000, when this movie came out, were found footage films like The Blair Witch. The self-aware stuff had sort of lost its charm. But it is fun in the end. I really didn't hate it the first time I saw it, it was on network TV by that point, and it definitely aged better than I thought. It was more over-the-top than the other two and got pretty close to being hysterical at times (mostly with Parker Posey the actress playing an actress playing Gale and following her around and what not). But yeah, it's not terrible. In fact, greatest movie of all time.

Rotten Tomato Consensus: According to critics, Scream 3 has become what it originally spoofed. Despite some surprising twists, the movie seems to have lost its freshness and originality by falling back on the old horror formulas and cliches. 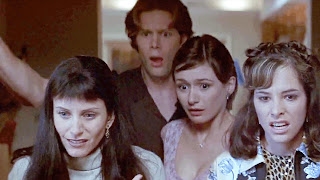 Pros: Decent humor. This is so over-the-top that you don't really need spoofs like Scary Movie. The story, while ludicrous, is still pretty interesting.  Pretty ladies. Always with the pretty ladies and these movies. OK way to wrap-up the series, though it was a little anticlimactic and not the real of it.

Cons: Some of the acting is pretty phoned in which I'm not going to dwell on too much. The shtick gets a little old the third time around. Gale's (Courtney Cox) haircut is atrocious. The plot hinges on some pretty confusing bullshit.

Gist of the movie is that three years after the college one, a killer dressed as Ghostface makes the rounds again, this time in Hollywood on a movie backlot, picking off actors from the third Stab movie in the order they die on film in an attempt to get Sidney to come out of hiding. With this being the "final" installment of a trilogy, "the rules" change yet again, brought to you via video by a dead Jamie Kennedy in one of the more bizarre moments of the franchise. Like the previous and preceding films, the installment was directed by horror maestro Wes Craven. David Arquette, Neve Campbell,  Courteney Cox, and Liev Schreiber reprise their roles as Dewey, Sidney Prescott, Gale Weathers, and Cotton Weary respectively. Newcomers include Patrick Dempsey (McDreamy from that one doctor show), Scott Foley whom you might remember as Jake Ballard in Scandal or from whoever he played in Felicity, Lance Henriksen from Aliens, Matt Keeslar (no idea), Jenny McCarthy (who popularized anti-vaccing), Emily Mortimer from Lars and the Real Girl, Parker Posey from the Christopher Guest movies, Deon Richmond (no idea), and Patrick Warburton who will always be Putty from Seinfeld. Legendary producer Roger Corman also has a cameo. As does Carrie Fisher. She plays a chick who looks exactly like Carrie Fisher. This was supposed to be the last of the franchise but then it was revived with Scream 4 in 2011, which is solid, and the show which debuted in 2015 and currently is in post-production on season three.


Some shit that stuck out includes Cotton Weary being this major late night talk show host with a car phone. No one gave a shit about him in Scream 2 and wouldn't give him the time of day unless Sid came along with him. Then he sort of gets some credit for saving the day and now he is like a regular old Howard Hughes/Jay Leno. He ends up the opening scene death, which keep getting weaker. It is sort of funny though since the killer has a fancy new voice changer that can make him sound like anyone. So when Ghostface attacks Cotton's old lady, played by Kelly Rutherford who was Dixie Cousins in The Adventures of Brisco County Jr. which is like my favorite show of all time, he talks shit in Cotton's voice. They also talk about having Stab roleplay sex which is insane. She ends up attacking the real Cotton which opens up the killer for a pair of easy deaths.

There is a surprise Randy explaining "the rules" scene which is strange considering he died in Scream 2. They needed someone to deliver it, I guess, and since it isn't all that serious of a movie, why not find a way to bring Jamie Kennedy back. The way this is so delicately done is they bring in Randy's never before mentioned sister--played by Heather Matarazzo who is this girl I've always mistaken for Thora Birch who played the girl that gets grilled on the stand by Keanu Reeves in The Devil's Advocate and had a bunch of other pretty dope little roles over the years (like DJ Tanner's girlfriend in Roseanne)--who has a video that her brother recorded just before he died in case the murders start up again after the events of the movie where he dies. Just roll with it. Even though it's dumb, I still love that rules shit. In this one, the end of a trilogy, we learn that: 1.) the killer will be superhuman so stabbing or shooting him won’t work and he must basically be cryogenically frozen, decapitated, or blown up; 2.) anyone, including the main character, can die;  and 3.) whatever you think you know about the past will come back and destroy you. Thems the rules for some of that sweet survivin'. 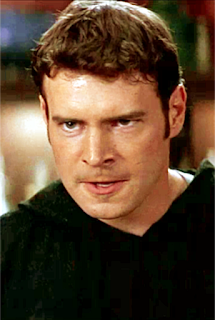 The killer ends up being this guy Rowan, spoiler, who is directing Stab 3 and turns out to be Sid's long lost brother that was born out of wedlock when Sid's murdered mother was an aspiring actress. Yeah, it's fucking weird and doesn't make a lot of sense and requires some serious dedication for a goof. It is fucking insane. So get this. He tracks down his biological mother (Sid's mom who died before the first one) who gave him up for adoption. She doesn't want to have anything to do with him. He stalks her. Finds out she is having an affair. Recruits people to kill her and toy with and then kill the rest of her family as well as a bunch of other kids. Hope that this becomes a book that is then turned into a movie franchise. Go to film school. Become a big shot director. Get old Hollywood stupid money. Agree to direct the third installment of that franchise. Kill everyone. That's it. What? I mean... What? But that is how it goes down. But he fails because he is an idiot. And then they shoot him, repeatedly, so as not to come back. Funny as fuck but not the most grounded in reality installment of the series.

Again, like Scream 2, not the easiest movie to pick a winner for. In the end I'm going with Parker Posey as Jennifer Jolie as fake Gale Weathers. She hangs out with the real Gale and constantly talks shit about how her Gale is better and what her Gale would do in such and such situation. She does die in the end but not before bumbling around and being crazy for all but the last 10 minutes of the film. She was also apparently banging Brad Pitt which is some sort of mind fuck since this would have been in the Jenifer Aniston years and Courtney Cox was on Friends with her at that time and so forth. But yeah, her over-the-top performance stands out as the most absurdly ridiculous in film that is full of them.


Another little detail that made this for me comes in the scene where the killer corners Sid on the set of Stab at the location of her fake house. Here, again, she has the opportunity to run out of the fake front door of her house but instead runs up the stairs just like she did in the first and just like she railed on would be survivor girls for doing in these types of flicks. Nice little attention to detail there on this deep cut.

Anyway, three of these films down with Scream 4 on deck. That one was genuinely really solid and I'm looking forward to writing about it. So look for that shit in the next few. Going to watch and write about something Independence Day related today though. Still deciding on what but I've ruled out Uncle Sam because it looks too shitty even for my tastes.