Scream 2 is the greatest movie of all time 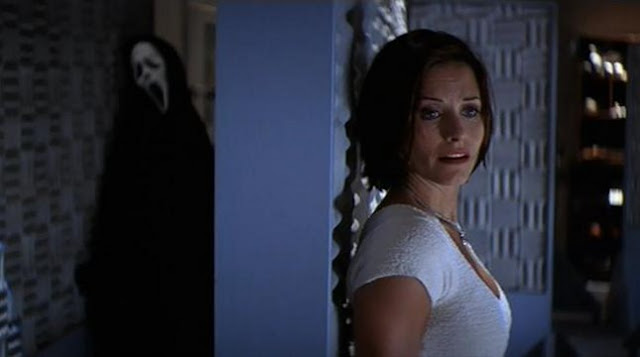 Scream 2. The crazy-things-are-happening-to-Sid-at-college movie. This was the first movie I can remember where I was gleaning leaked info from the internet. A movie within the movie that was based on the events from the first movie. Hearing about this, though nothing new, really, did blow my little freshman mind with anticipation. Was incredibly stoked when it finally came out and I thought was a worthy followup to the most groundbreaking horror movie released in my lifetime (though Get Out might have surpassed the original Scream on that front). In some ways I liked it better than the first film, although it is really tough to beat. Like the way Sid is a damaged character, the way Randy explains the rules for sequels, the way it is established that "brothers don't last long" in horror movies, and so forth. For these reasons I'm gonna call it... Greatest movie of all time.

Rotten Tomatoes Consensus: As with the first film, Scream 2 is a gleeful takedown of scary movie conventions that manages to poke fun at terrible horror sequels without falling victim to the same fate. 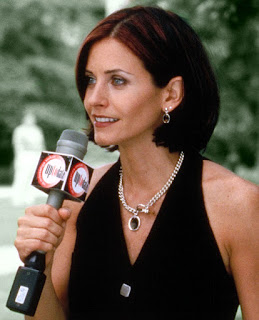 Pros: Seems cliche now but it did for horror sequels what the original did for horror flicks. Mixes humor and murder pretty deftly. Decent amount of wit. The movie within the movie is great shit. Pretty ladies. Cox never looks better than she does in this movie. Just about as rewatchable as the first one. Great couple of kills (especially the cops).

Cons: More or less just more of the same (not that I consider this a bad thing). A little too cheesy, maybe.

Gist is a couple years following Sid getting attacked by her boyfriend and his partner-in-crime after they killed a half dozen or so people at her high school while dressed in the now famous Ghostface mask, a copycat killer now takes up murdering people at her college. Like the original, we get all the meta genre stuff, wit, and satire as we see how the whodunit unfolds. Also directed by Wes Craven, the movie stars all the survivors Scream in David Arquette as Dewey who is just as brain damaged in this one (see the scene when he almost gets killed at the end [his downfall is stepping in pizza that is on the floor, which is just completely insane]), Neve Campbell as Sidney, Courteney Cox (who looks great in this one) as Gale Weathers, Jamie Kennedy as movie geek Randy, and Liev Schreiber as wrongly accused Cotton Weary. Short-lived newcomers to the franchise include a murderers row of '90s college aged talent in Omar Epps, Rebecca Gayheart, Sarah Michelle Gellar, Joshua Jackson, Jerry O'Connell, Timothy Olyphant,  Portia de Rossi (Lindsey from Arrested Development) who shows up out of nowhere to show us what a Blueth was like in college, and Jada Pinkett Smith. We also get some Laurie Metcalf (who plays Jackie in Roseanne) action as, spoiler, a news report who ends up being the mother of Billy Loomis, the murderer from the first one, who teams up with Olyphant for some sweet revenge.


Most memorable scenes from the flick include the opening, the Randy talking about movie scenes, and the dress rehearsal of the Greek tragedy "Agamemnon". The first is sort of the amuse bouche for the flick. After having no diversity in the original, here we get Epps and Jada at the "Stab" premiere which is the movie within the movie that details the events from the first flick. So right away we know that that is a thing and that people are into the story in that universe like audiences were into Scream at that same time. Which is all a little confusing. Plays within plays or movies or whatever have been around since the Renaissance dating back to before Shakespeare (although he more or less popularized it) and weren't even new to TV and movies like with "Itchy and Scratchy" in The Simpson, of course, but this movie within the movie about the first movie was pretty fucking nuts. Here we get Epps sticking his head up to a bathroom stall at the premier of "Stab" to listen to two people have sex when the killer sticks a knife through the stall door and into his head. Scary Movie sort of ruins this when they completely copy this scene with one of the Wayons bros getting a dildo to the brain instead of a knife. Jada, for her part, gets murdered in the theater with people cheering, thinking it was a part of the show or something. It is brutal. Being surrounded by all those people and no one taking your screams seriously. 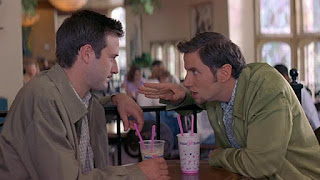 As for the scene where Randy talks shit about them living in a sequel or whatever, keep in mind that while the thing that Scream does where everyone in every horror movie knows they are in a horror movie has been played to death, back in 1998 it was still new and hadn't really been done before the one came out in 1996. So, yeah, this was still defining the tropes and telling us what was to be expected in the age of self aware horror in regard to sequels. Like we saw in the previous film, Randy does this pretty much directly in two scenes. The first one he is in film theory class or something and him and Olyphant and Joshua Jackson are discussing the apparent lameness of most sequels. Randy holds the position that no sequel has ever outdone the original. People name various examples, none of which I give a shit about, where this was not the case. This is an ingenious little scene here and forces audience participation. Every time I see this movie, probably around four times at this point, I think of new examples that have popped up since my last viewing (this time Thor: Ragnarok came to mind, another previous one I thought of in the horror genre is Evil Dead II which I have to get around to soon). And we also get one of the killers talking movies, showing his hand a little bit. The second Randy-talks-movies scene is when him and Dewey are at a diner after the killings start up again. Here we get "the rules" which basically come down to more people will die in more gruesome ways. They all can't be winners, I guess. An honorable mention sort of related to horror movie rules would be when Gale's black camera man states that brothers don't live very long in horror flicks. A bit of situational irony there as he is saying this whilst bouncing out of town and thus ensuring his survival.

The last really memorable, and probably best, scene in the movie is the one where Sid is playing the role of Cassandra in the Aeschylus tragedy "Agamemnon" which is part of The Oresteia which is a trio of plays based around the Cassandra character at dress rehearsals. Early, Sid talks about how she wants to go on with the show despite all these murders. During the rehearsal, the chorus chases her about with fake daggers wearing cloaks and masks. Here we see Ghostface among the chorus, which may or may not have been real, slashing at her and weaving in and out with the other actors. It is all chaos and Sid freaks out. I like to think this wasn't Mickey, who was nearby and is later revealed as one of the killers, the experience is just too much.

But none of those were the truly best scene in the movie. That is hands down when Jerry O'Connel's character sings "I Think I Love You" by The Partridge Family at the top of his lungs to Sid in the school cafeteria. It was super sweet and totally impressive. Apparently the role was between O'Connell and some other guy and O'Connell nailing this scene is what got him the part. If he would have survived, he almost certainly would have won the movie. Check it out...


Best kill of the movie was the cop on the hood of the car. Here, Sid and her soon to be dead friend Hallie get picked up by the cops on Sid's protection detail. While they are stopped at a light, Hallie, who is pretty terrible, is like "uh, where we going?" The cops just say a bunch of stupid shit like "if we tell ya, we'd have to kill ya," and "don't ask; don't tell" which, you know, maybe pay attention instead of making the worst dad jokes of all time and shit. Of course Ghostface pops up here and stabs the driver in the throat. The other gets out, gets kicked in the face, and ends up on the hood with Ghostface driving like a wild man. He eventually rams it into a construction zone, plowing into a dumpster full of metal pipes. One of these ends up through the guys head in super gnarly death. The girls then have to climb over Ghostface, who is passed out from the wreck, to get out of the car. It's a pretty shit situation to be in.

It is tough to say who won this one but in the end I'm going with Gale. No longer hated, her and Sid end as sort of friends. She gets the scoop, kind of falls in love (again), survives getting shot, and kills a rival that isn't even on her level. Plus she is looking fierce in this installment. In 3 she has this weird bang thing going on that I'm not crazy about but here she is perfect looking. And is just totally a badass. Winner. This chick.

So that was Scream 2. I sort of like this watching and writing about an entire franchise and am probably going to do that with all the big ones. So, yeah, look forward to seeing some shit on 3 and 4 here before too long. Also some shit on Sleepaway Camp and Texas Chainsaw as well, assuming I get them done before the fall. Then I'll be doing the rest of the Halloween franchise.