Jaws is the greatest movie of all time

Jaws. We're gonna need a bigger blog. Was just the 4th of July and this is the best 4th of July movie so watched that shit. What can you say? Steven Spielberg's first real movie. The movie that made everyone terrified of sharks, unjustly. Eventually made "Shark Week" possible. It tells a story as old as time. Man and beast are separated for 1,000s of years by a natural line. Man crosses that line. Man is eaten by beast. It's the same formula we get for slashers like Halloween and Friday the 13th and action movies like The Terminator. Hell, Alien marketed itself as Jaws in space. Unthinking, solely focused killing machines (not that that is how sharks really are). Easily the best creature feature of all time, it's also the best Fourth of July movie of all time. I watch it nearly every year around this time. Conservatively this was my 15thish viewing going back to when I was like one. Still love that shit. Greatest movie of all time.

Pros: Extremely engrossing. Pretty F-ing scary. Super tense, even after many viewings. Some unexpected humor. Great characters. Legitimately one of the greatest movies of all time. From the moment they get on the boat the movie is perfect.

Cons: Unjustly soured everyone on sharks. They can kill you, of course, but want nothing to do with you. Like more people are killed by falling coconuts every year than shark attacks. 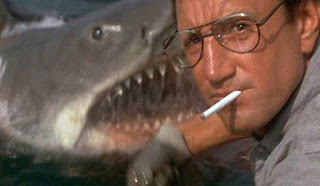 Here's to swimming with bowlegged women. Gist, which you should really know at this point, is that the police chief of a small beach/island town, a shark expert, and an old fisherman hunt down and kill a man-eating great white shark on the fishing boat "Orca". The three main guys are Richard Dreyfuss who plays marine biologist Hooper, Roy Scheider playing Police Chief Brody, and Robert Shaw who played the salty old fisherman Quint. How none of them nor Spielberg got nominated for an Oscar is insane. Only other people really worth mentioning are Murray Hamilton as Larry Vaughn, Mayor of Amity Island, and Lorraine Gary as Brody's wife, Ellen. Hamilton is a great asshole while Gary is a perfect motherly type. She is totally great in this. The film is based on Peter Benchley's 1974 novel of the same name. In the end this was a huge regret of his. He didn't realize there was no such thing as a rogue shark that develops a taste for human flesh. I mean, who among us would. Later saying, "No one appreciates how vulnerable they are to destruction." Yeah, sharks get a raw deal and will probably go extinct in my lifetime. That's a huge bummer. Anyway, this movie redefined the way movies are shown. They used to have movie play in like 12-18 theaters and then it would expand/move. This opened up in 400+ theaters so that basically everyone could drive to a theater and go see. Thus was born the summer blockbuster.

Some shit that stuck out... Lot of ridiculous quotable lines. The first is from the Fourth of July scene just before the Kitner boy gets eaten and we get "the Jaws shot". Here, Brody is watching the ocean with dread, just knowing some shark shit is about to go down. He thinks he sees one but an old guy in a Speedo and an absurd strapped swimming cap pops up. False alarm. The guy climbs out of the ocean, walks over to Brody, says something to him about being too afraid to go in the water. Brody, without missing a beat, "that's one bad hat, Harry." A great and dumb line which you might have noticed after several shows and movies as it is the name of Bryan Singer's production company. You might know him as the director of The Usual Suspects or the X-Men films. Then again, you might know him as a grip in the film Street Trash which is the greatest movie of all time. This is an obvious homage to that absurd line. Anyway, also love the dipshit standing on the dock amongst the dipshits that roped in the tiger shark thinking it was the man-eater. Hooper is like, oh, look at that, you got a tiger shark. This fucking moron looks at him with his dumb, fat face and says, "uh what?"

Basically everything that Mayor Vaughn, played by Murray Hamilton, is fucking crazy. He is convinced that there is no shark for the first 1/3 of the movie and is obsessed with keeping the beach open. He basically goes to extraordinary lengths to deny the thing killing everyone is a shark. Like when Hooper and Brody get liquored up (Hooper brings over a nice bottle that he says they should let breathe as Brody pours himself a pint glass of red that he pounds like a champion) and go out on the water and find that boat floating around with that guy's head in it, which was probably the only unnecessary scene in the movie, they go see Vaughn and are all, "yo, the shark is fucking out there still." Hooper is like, "there was a tooth that was 3-inches long! It was the shark that has killed all the people!" He is like, "a toof, huh, where is it?" Hooper is like, "well, I dropped it when I saw the head." And Vaughn is all, "well, there you go, who knows what it was. He doesn't have the toof!" Next thing you know he goes down to the beach and makes his lackeys and their families get in the ocean and swim around which gets some idiot in the lagoon killed with his leg sinking down to the bottom of the ocean. This is what happens when you vote a pro business, free market capitalist psychopath into office.

Speaking of people saying crazy things, I can't understand a damn word that comes out of Quint's mouth. What the hell is that accent? I'm pretty sure it's Maine. Hear basically, "mah ra, herda hrum, here's to swimming with bowlegged women, hro hrum." Also, he plays pretty fast and loose with everyone's lives. Most notably he blows up the engine chasing the shark at max speed despite everyone's pleas and smashes the radio like a mad man when they are totally fucked and Brody tries to call for help.

Bunch of scenes really stick with you. That opening where they basically waterboard and whiplash a naked woman around with a mechanical god only knows what is a truly great and horrifying way to open a movie. Doesn't waste much time getting fucking brutal. Really starts in the next scene when Brody and the idiot that was too wasted to take his pants off find the dead girl stand there looking at what is left of her with Brody holding her purse and clothes. It is a pretty nice and powerful touch. We later see her remains fit in a small tub which causes Hooper to just about upchuck throughout his examination. Another super fucking brutal scene is after the Kitner boy gets eaten and Ms. Kitner stands at the bloody shoreline looking for her dead kid. She is panicked and desperately looking around when she sees his inflatable floaty thing he was swimming around with wash up to shore, torn to shreds. The last just completely brutal scene comes when Quint slides down the boat straight into the shark's mouth and gets chewed up like chewing gum. The shark looks not super real but you don't really pay attention to that because Robert Shaw sells the fucking shit out of it. This is how you would act to getting turned into chum, for sure. And this movie is rated PG by the way. Nudity, an eaten kid, a dude that gets chomped to death for 20 or so seconds whilst screaming. Totes cool for the kiddos. 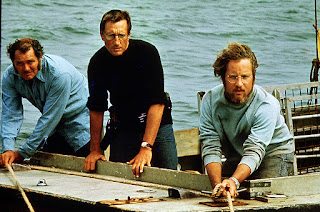 A few more of my fave are when Quint scrapes the chalkboard and says he'll find the shark for $3,000 but he'll kill him for $10,000. Bad fish. Chomps oxygen tanks like cigars. All that stuff. The whole time they are in the cabin of the boat where they compare scars and Quint talks about being on the USS Indianapolis. My favorite little line there is when Hooper opens his shirt to expose his hairy ass chest, this during the scar sharing, and asks if they know what that is. Brody is like, "a sweater?" Funny stuff. And more or less the whole last third of the movie when they are on the boat. Shit is tits. Super homoerotic too. Like when Brody takes Hooper's glasses just before he goes down in the cage and sticks them in his mouth to clean them or whatever. Pretty fucking weird/gross. I wouldn't do that for anyone, I don't think.

MVP of the flick, no surprise, is Spielberg, who is like uber famous after this film comes out and goes on to do some of the highest grossing movies of all time. Of course, Jaws, at the time its release, became the highest-grossing film of all time, keeping the title for one year until Star Wars: Episode IV - A New Hope came out. The franchise would beat itself out six years later with Episode VI - Return of the Jedi but Spielberg would take the title back with E.T. in 1983 which he would surpass with Jurassic Park in 1993 (FYI, currently, Avatar holds top grossing honors). I mean his movies are basically all beloved classics (with a few exceptions) including the four (or at least three) Raiders movies, Close Encounters of the Third Kind, Schindler's List (a total bummer of a movie), Saving Private Ryan, Munich (one of my personal faves), and like shit ton of other movies that people fucking love that make stupid bank. And none of this would be possible, probably, without Jaws. Arguable one of the greatest movies of all-time. No shit.

I like what you shared in the article, thank you for that, it has given me more experience. I would like to share with you some interesting things, if you have free time and want to find a tool for fun read it now.i will love you forever quotes Read and ponder the good quotes of life below, you will surely draw in life's own deep lessonstruyện h nặngOr you can go and search for the most fun games to play likenhạc chuông lạnh. Surely what I'm introducing to you will not disappoint you. Please click and experience. Having fun.

^^^That's the dumbest shit I've ever seen in my life. I'm taking the experience back