The Big Year is the greatest movie of all time

The Big Year. This movie is the best. Seriously. A movie about birding. After my last couple days of birding, went on the hunt for a roseate spoonbill (the second ever one to show up in Indiana) which I finally saw after 10 or so hours of tracking it, my female companion, shout out to Rachel, recommended this movie. Absolutely loved it. The flick was truly inspiring. If you are a birder you have to watch The Big Year as it is the greatest movie of all time. 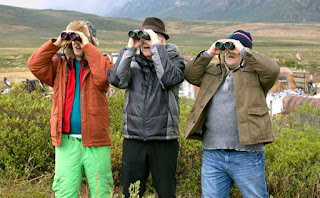 Rotten Tomato Consensus: Though made with care and affection for its characters, The Big Year plods along, rarely reaching any comedic heights.

Pros: The cast was perfect. Couldn't imagine a better subject matter for a niche, subculture movie. Motivated me to take more trips specifically for birding.

Cons: Opened me up to all the birds I am never going to see and bird places I will never be able to go (namely Attu, Alaska).

Gist: The Big Year tells the tale of a trio of birders who are trying beat the world record for identifying the greatest number of species of birds (that one of them had previously set). Playing the archetypal birders are Jack Black (the broke dude), Steve Martin (the CEO), and Owen Wilson (the obsessed record holder). The only one among them that can have a more or less normal life is Steve Martin's character and that's because he is older with many decades of marriage between he and his and he's rich AF. The role players in the flick include Anthony Anderson from Black-ish, Brian Dennehy who starts out as a dick but has a really touching birding moment in the end with Black who plays his son, Anjelica Huston who I adore, the lovely Rashida Jones from Parks and Recreation among other things as Black's love interest, Joel McHale, Tim Blake Nelson who was the little guy from O Brother, Where Art Thou?, Jim Parsons from that shit show The Big Bang Theory, Kevin Pollack from The Usual Suspects, Dianne Wiest from The Birdcage (another great birding movie, JK), and JoBeth Williams from Poltergeist.


Several solid scenes here that were truly inspiring. Loved when Owen Wilson and Tim Blake Nelson are driving out to see a bird and get into a car wreck. The little guy is like, "I think I broke my arm." Wilson tells him to shut up, basically, and tracks a woodpecker. It ends up being of the great spotted variety which as a Eurasian/African bird basically shouldn't be here. But they do tend to wander. So once they see it, Wilson is like, "how is your arm, now?" and the little guy says to cut it off as that is the rarest bird he has ever seen. Shows you the type birders are if you know what I mean.

The other scene that really stuck out was when they go to Attu, Alaska. We are talking about a place with no permanent residents. It is the westernmost body of land east of the International Date Line that is part of the United States. Even farther than Hawaii. It is rustic AF. The plane you have to take to get there is rough and you land on grass. The only reason to go there is birding and you stay in abandoned army barracks. On the plane there we see a couple that is honeymooning there. The wife has no idea what she is getting into. Everyone else does though and thinks it's a pretty dick move. But for birds, this is a fucking dream. It is all birding all the time. That is all these people are there for. It is magical, spending time with like minded obsessives that are into your thing. The female companion and I are now talking about a less extreme version of this. Talking about going to Nome for birding and other wild life. It's that type of inspiring.

The breakout star from this film, i.e. winning the movie, were birds. I am planning birding trips based on locations for this movie. It inspired me in a real world way and I have been riding high on it for weeks, even dreaming vividly of birds at night. If you are into birding this is a definite must see as we are never going to get our own movie again as it was considered a box office bomb. The budge was $41 million and it took in just $7.4 million in ticket sales worldwide which ain't good. I blame this on marketing. Watching the trailer (embedded below), I have no idea it is about birding which is the only subject matter the movie really deals with.  Other than the bit at the beginning about "bird fallout", there is no mention of the central focus of the film. It looks like a bucket list movie or something but it's really this wonderful little flick about these beautiful little creatures that everyone sees every day that some people really care about. Greatest movie of all time.