Street Trash is the greatest movie of all time 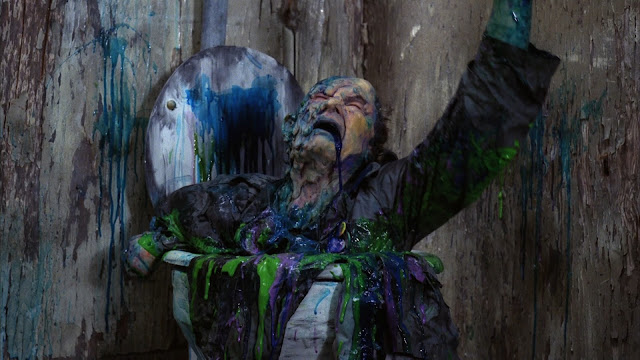 Holy shit. Street Trash is fucking bananas. This is genuinely an insane, next level melting horror flick that everyone needs to check. It's basically homeless people melting and exploding with bum shenanigans mixed in. Didn't realize melting movies were a popular sub genre of horror until I was doing research for this crazy flick. This is not for the faint of heart. It is disgusting, offensive, and brutal. There is also a lot of uncomfortable homeless nudity. If you are into that, or can at least stomach it, then you are in luck because this is the greatest movie of all time.

Ok. Here. We. Go. Gist is the owner of a Brooklyn liquor store discovers some prohibition era hooch in the wall of his store and decides to sell it to the homeless for $1. Unbeknownst to him, the contaminated bum wine melts all who drink it into blue/green/purple puddles of slime with some of them exploding and so forth. The issue is the result of some sort of government conspiracy like how the CIA created AIDS to kill off black people. They sort of abandon this story line for long periods of time. Instead, the movie explorers the hobo lifestyle as well as bum hierarchy as up and coming bums do battle with a feudal bum king type that seems to be more or less above the law. It's super Peter Jackson esque. The movie was directed by James M. Muro in his only feature film which is an outrage considering how good this was. I can't (but sort of can) believe that no one gave him another shot at directing a feature film. This is where director Bryan Singer (of The Usual Suspects and various X-Men movie fame) got his start and Muro has worked on several of his projects, mostly as camera man or director of photography, over the years. The movie stars Mike Lackey, R. L. Ryan, James Lorinz, and  Vic Noto, none of whom I've ever seen. Fun fact about this flick, when the cast and crew arrived to the premiere, instead of renting a limo, they rented a garbage truck that took them to the red carpet which is hilarious and appropriate.


Several dope scenes here but I am sticking my with the most memorable that doesn't involve a horrific rape/murder. In this one, this bum accidentally pees on the bum king and the bum king cuts the guy's dick off. From there he throws it to the other homeless people who then play keep away with it, tossing and punting it like a football. He eventually gets it back and seems to be on his way to getting it reattached which I'm sure his insurance will likely cover.

Something that cracked me up though were the various scenes between this idiot restaurant doorman and the owner who is some sort of mob boss. It was the owner's girl that was raped and murdered a few scenes before. The police bring these guys in and are sort of getting statements from them at the same time when the idiot doorman is like "I have all this dirt on the owner" and starts talking hella shit. The cop is like, "uh, what are you doing, bro?" and he is like, "can't I get some witness protection?" The cop is like, "no, and you should probably stop talking." So this shit is awkward and now he has a mob boss talking about how he is going to murder the shit out of him and what not. All of their scenes are pretty great and just one of the several side plots that go on and are affected by the tainted hooch.

The breakout star of this film is the shoplifting bum who is just too much and seems to live by a sort of hobo code (more on that later). The scene where he really steals the show and yuks it up is when he pops in the grocery store and just starts shoving an insane amount of food down his pants. The whole scene is one of the most absurd things I've ever seen. Eventually he draws the attention of an old white lady who is beyond shocked which prompts a "whatchoo staring at bitch?" much to her indignation. She states that she is going to tell on him and he yells loudly to no one "wrinkly honky mother fucker thinks this is junior high" which is always funny. Then the manager, another black dude that he thinks is a "brother", asks him what he is doing with so much chicken in his pants. He tries to play dumb but he has an insane amount of chicken sticking out of cuff of his pants. He then produces a receipt for dog food and gets outraged and bums out when the guy is like, "let's get security to figure this out." He then starts spouting crazy homeless person stuff about reporting him to his superior before putting a paper bag on his head and bursting out of a window. I feel I have seen stuff go down like this IRL but then it is more sad than hilarious, which this was. Totally worth checking out so here you go.

Some of the melting scenes are really something. My personal faves were when a fat guy rapist/necrophiliac drinks it and explodes, the main bad guy's disgusting homeless chick (the bad guy is like a murdering,psycho, bearded, Vietnam vet, king of bums type by the by) drinks the hooch and her tits fall off, and the one where the main bad guy's snitch henchman steals it and gets his comeuppance. In the last one the protagonist bum, who has figured out that the hooch kills, walks around with the bottle on display, knowing that the dickhead would steal it. So the guy attacks him and takes it. But the shoplifting bum from earlier sees it go down and takes it back as it is against the hobo code, if you will. So he gives it back and the guy is like, uh, thanks, and basically coaxes the guy into trying again, which he does, and fucking dies.

If you make it to the end, I assume the rape and bum fights are going to turn off a lot of people, the death at the end was one of the most awesome and unexpected of all time. The bumtagonist is trying to save this cute homeless chick from the king bum guy who is completely losing his shit and shoots an air tank air tank at him by knocking off the air valve off of the end. I sort of expected it to hit him and knock him out or something as it would in most movies now. But no. It hits him square in the chest and knocks his head off. He sort of explodes out of nowhere and the upper part of his chest at the shoulders and head just go flying off. It is sort of weird but looks awesome and real. Still barely holding on, the guy looks up the girl's skirt he was going to kill as she steps over his decapitated head. It is funny as fuck and a totally insane way to end this fucking crazy ass flick.