Prom Night is the greatest movie of all time 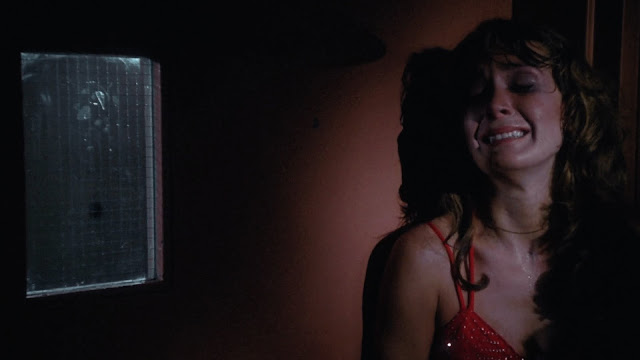 Prom Night. Canadian. Sweet. Lots of Jamie Lee Curtis high kicking. This and Halloween cemented JLC's status as a "Scream Queen". Lots of Leslie Nielson in a noncomedic though not entirely serious role. Lots of disco. Lots of stalking/death. Just like my junior and senior year proms. Shout out to Lindsay, my date to both of those dances. This movie combines Saturday Night Fever and The Town that Dread Sundown and sort of Carrie to form one hell of a strange flick. The movie has a sequel which I'll need to check out at some point called Hello Mary Lou: Prom Night II, which just sounds incredible, but the magic starts to happen around parts three and four, generally. Lucky for me there are Prom Night III: The Last Kiss from 1990 and Prom Night IV: Deliver Us From Evil from 1992. These were what you would call sequels in name only and do not star JLC or the Naked Gun-man. If that isn't enough Prom Night for you, there was a loose remake that came out in 2008 with Idris Elba and Brittany Snow. Can totes see why they would want to remake Prom Night as it is the great movie of all time. 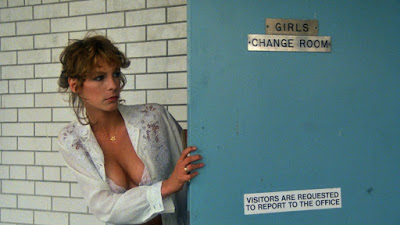 Cons: Was pretty confusing and slow at times. Pretty predictable.

Gist of Prom Night is that four little kids tool on a girl in an abandoned building to the point that she falls out of a window and dies. Yeesh. This is a sibling of JLC and her bro who are wearing the same outfit when they go out looking for the dead kid. Fast forward several years and a killer, possibly the escaped sex offender blamed for the crime, possibly Leslie Nielsen, or possibly JLC or her bro, starts picking off the kids that were there on the same day as their senior prom. In addition to JLC and Nielsen the movie features Antoinette Bower, Anne-Marie Martin, David Mucci who plays Lou and has the most ridiculous unibrow I've ever seen, Pita Oliver (a pretty lady), Mary Beth Rubens (another pretty lady), Casey Stevens, Michael Tough, and Jeff Wincott. I'm gonna assume that none of these names mean anything as I've never seen nor heard of any of them.

About the two people I recognize in this flick... I was super confused at the beginning of this flick when Nielsen showed up. Is this a comedy? Indeed it is not. Nonetheless, it is super weird seeing him play a straight-laced by the book cop. The other thing is that JLC was super pretty. I forgot what a beautiful young lady she was. Now it's all eating yogurt and staying regular.

Some weird shit that you should watch out for include the extreme sexual tension between JLC and her onscreen brother. They have a super sexually charged dance off in this extended disco prom dancing scene that is just out of control and goes on for like 10 minutes. What it reminded me of was when Ross and Monica dance their asses off in the Friends episode "The One With The Routine" in hopes of getting on the Dick Clark New Year's special. Just like that except without the irony. Lot of high kicking and grinding on each other. Fucking gross.

More weird shit includes the whole scene revolving around the couple in the van. It is unclear if they had anything to do with the death at the beginning but they get got either way. This all starts post-coital, of course, where the guy and the gal (who is way out of this fat idiot's league) smoke a doob that they pull out of this book that has been hollowed out and filled with pre-rolled jays. There must be like 50 of them in there. So these two are high as balls when the killer pops in and totally kills their buzz, man, by all murdering the girl. Bummer. So the guy hops up front to try to drive way. What ensues is an insane driving and fighting scene where the dude is driving with the killer in the van like he is going to get away from him or something. But by some miracle the fatty beats off the killer, not in the hand job way, you sick fuck, and is home free. Instead of driving like a normal person though he drives right off a cliff like a dumb fuck and the second it goes airborne explodes. I'm no physicist but usually vans have to crash before there is burn. That is why they call it crash and burn, I'm guessing. Just part of the charm in this one. Defying the laws physics.

Another thing, there are some real charmers in this movie. First there is Lou, the unibrow guy. You have to watch this shit to appreciate how fucking awful this dude is. He goes to pick up his date for prom, the girl played by actress Anne-Marie Martin who is way the fuck out of his league, and just honks the horn repeatedly. When she goes out to the car, irritated, he and a buddy are getting wasted. He is not dressed up, wearing jeans and a cutoff (we later see this same ensemble with a tux coat thrown over it), and just acts like an asshole and runs over the chick's parent's garbage cans as he peels out. It's nice when he finally gets his head chopped off and kicked. Then there is the guy dating Kelly, the Mary Beth Ruebens character. The scene where she gets it is preceded by a heavy petting sess between the two. This in the girl's (I think) locker room. He lets her know that he is DTF but she, you know, doesn't want to lose her virginity in a public bathroom. He pressures her some more but she ain't ready. "If you won't do it, there are plenty of other girls who will," he says. And then he leaves, immediately talks some shit, and then starts making out with some other random chick who was digging his shit talking, rapist vibe. Meanwhile, that chick in the locker room is like, "I guess we broke up?" before getting dead.

If you aren't into the ridiculous stuff I just went into and are more of the horror movie purest, fear not, the ending of this flick totally redeems this movie. With one mean girl left at prom, the killer stalks her throughout the entire fucking high school. Suspense really builds as she keeps almost getting caught before just getting away. It builds and builds until she gets to the end of building with all the doors chained shut. This goes on for a long ass time and is fucking brutal. See? Something for everyone. Pretty ladies, gore, creative killing, suspense. Everything. Greatest movie of all time.

Just watched the movie for the first time. Enjoyed your review but correction... That dancing scene and the picture you posted was with her boyfriend Nick and not her brother Alex.