Nothing But Trouble is the greatest movie of all time 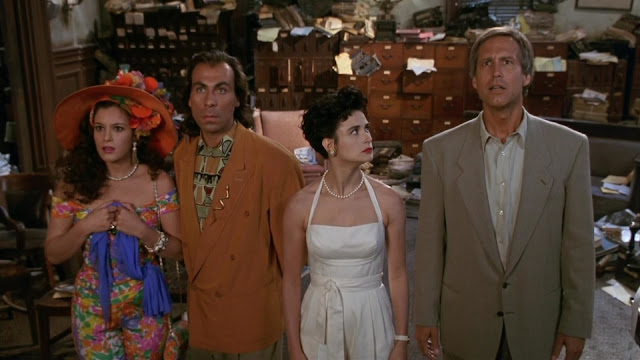 Nothing But Trouble. This movie. For a lot of people I would imagine this is that movie, if you know what I mean. Remember watching it as a 10 year old child and thinking this was a totally fucking bonkers, next level horror(ish) film. And nearly three decades later, exact same shit. I'm gonna call it the greatest movie of all time, begrudgingly, but this movie is fucking bananas.

Looking over my notes I write like seven times, "what is this movie?" Is this a comedy? I mean, I never laughed. Horror? I did nearly legitimately wretch while watching Dan Aykroyd in disgusting old man makeup with a detachable dick nose eat a hotdog and I did sort of get freaked out when these two giant twin baby men give off a rape vibe with Demi Moore but it is way too off the wall to be a traditional horror movie. Also, I think this is maybe meant for kids. I don't know though because it could also be satire. I mean it touches on a certain anxiety that you see in a lot of movies in the '70s and '80s where rich city folk leave the city for the first time maybe ever and go to the country where inbred yokels try to kill because they are wealthy elites. I met a lot of this type of person in college who were terrified of the locals who lived and worked in a college town in rural Ohio. Those people are, well, you know. Some examples where this happens include Children of the Corn, Deliverance, Friday the 13th, The Hills Have Eyes, The Texas Chainsaw Massacre, The River Wild, so forth. In each of these movies, affluent urbanites wander out of their borough into the country where they are tormented by crazed bumpkin predators. But maybe that is supposed to be genuine. I have no idea. All I know is that it is way fucking out there.

Pros: Completely unique. You certainly aren't going to see anything like this ever again. Demi Moore is an attractive lady (I'd say more so now but whatever). Really throws you a curve ball there early in the movie. John Candy is pretty solid (although misused).

Cons: The plot is nutso. Chevy Chase is not a good actor. Neither are Aykroyd, Demi Moore, the Brazilian brother/sister duo, Humpty Hump, or Daniel Baldwin.

Where to start with this one that I can't even really define. The AV Club called this movie "the antithesis of a 'hang out movie'," saying that "Aykroyd here has lovingly, meticulously created a hideous, grotesque nightmare world nobody in their right mind would want to visit the first time around, let alone return to." Well, I did return and I have seen some shit. It is best to go in with Chuck Klosterman's mantra, "crazy things seem normal; normal things seem crazy." Here goes.

Staring medium talent Chevy Chase, Demi Moore, Dan Aykroyd, and John Candy. Aykroyd also wrote and directed the film so we have him to thank for every aspect of this gem. The movie also features Daniel Baldwin, Brian Doyle-Murray (brother of Bill Murray, archenemy of Chevy Chase), The Digital Underground who perform multiple full songs (look for Tupac in the background), Taylor Negron and Bertila Damas as a brother/sister pair (I suspect because no one is buying these two as lovers [they are so weird]), and Valri Bromfield. Most of those people are actors of the sort where you are like, "oh yeah, I've seen that person before but have no idea what he/she were in."

Chevy Chase (whom you immediately hate) plays a financial publisher, he tells people (including hillbillies he runs into) shit like "buy gold; sell pork", trying to woo Demi Moore, a lawyer who has to go to confront a lover/client that is trying to rip her off or something. What Moore has to do here is sort of unclear as is her relationship with the guy she is going to confront but it doesn't matter because we never see him. They, along with another couple, decide to drive to Atlantic City to, I don't know, like shake the guy down or something. Again, doesn't matter. The movie starts out pretty normal, strangely, considering where it ends. That is where the movie seems to be going until the Brazilian couple starts bitching about how boring and shitty the New Jersey turnpike is and they get off to do some scenic driving in rural New J. When Chevy rolls through a stop sign, Candy tries to pull him over but the Brazilian couple convinces Chevy to run which is pointless and insane and in the end doesn't matter. Candy takes them to "court" where Aykroyd plays the disgusting judge with a PhD in engineering (his house is mechanical AF) in the town of Valkevania where he sentences people who commit traffic violations to death. And insanity ensues from there.


Some things of note... Chevy Chase says so much weird shit throughout the movie. I feel Aykroyd just let him vamp and left it all in for whatever reason. Stuff like his character Pierce in Community would say that was just strange and not very funny. In that show it was ironic but here it is supposed to be real jokes, I guess. Like when they drive by a series of buried statues at the judge's mansion, Chevy says "So that's where they buried Flipper," which, yeah. Fausto, who is an idiot, asks "Flipper is dead?" Whatever.

So Aykroyd is so fucking gross in this movie it is insane. I fucking gagged when he ate a hotdog. You can look that shit up if you are interested. I sure as shit am not reliving that experience. Did like when they arrested that Baldwin bro and his entourage. They get arrested for driving under the influence and then pulling a gun on Candy. When that foursome shows up to court and see the judge they just laugh hysterically, which is the appropriate response I think. But they get sentenced to death which come by way of a roller coast called the Bone Extractor or something. It sends them through this like funhouse and when they come out the other side it is just bones that fly out hitting a bullseye that makes jackpot noises. Crazy things seem normal; normal things seem crazy.

Both Aykroyd and Candy play other roles in the film. Candy, for his part, besides the cop, also plays his twin sister who marries Chevy Chase at one point. The way I remembered it was that the sister was his like alter-ego and it was really the cop the whole time. That is not the case. This is two separate characters and at one point we see them horribly CGIed into the same scene. Aykroyd's other character is another disgusting deformity as one of these twins that these fat baby men in diapers. Unclear what these guys are. Mutants I'm guessing. They are horrifically disgusting and when Candy's female role tries to kill Demi, the twins step in and stop it, saying they "want to play with her." Yeesh. Give off this real rapey vibe but that doesn't happen, thank fuck, as these guys are more childlike than the Hills Have Eyes sort. Candy's female character, however, does legitimately get rapey with Chevy Chase which I'm not going to dwell on. This might be a bold statement but I am very much against rape. Where do I find the courage?

Assuming most people won't be able to make it to the end of this movie--though I consider it the greatest film and all, I'm not sure that this is the film for everyone--I'm going to spoil that shit. So they eventually escape and go to the cops. The cops have them draw out a super detailed map of the property and they seem as if they are taking this very seriously. Then they go there with like a small army that includes about five different kinds of law enforcement. Demi and Chevy go along and the FBI is like, "how about you go knock on the door," which is weird but they do. When that happens you think he is going to be like, "oh, I'm just an old man." Well, you'd be right. But Demi and Chevy are like, "we got you, fucker," but he tells them they have a big ole bees nest behind them, or something like that. So they turn around and in unison, the 700 person army screams "hi judge!" getting their shit together for that as Demi and Chevy were walking to the door, I guess. But by some miracle they get out of the situation, the mine built under the town like erupts and the ground swallows more or less everything.

Now Demi and Chevy escape. Again. And Chevy is back in his NYC apartment having nightmares about this shit which is totally understandable (as a matter of fact, I have nightmares about this movie as well) when what pops on the electric TV machine but the judge giving an interview to the local press corps saying that now that the mansion imploded they are going to move in with their "banker" son-in-law. Chevy Chase is like, "NOPE! Fuck you!!!" and explodes out of his apartment on god knows what floor Looney Toons style with a Chevy Chase sized hole in the wall. And that is Nothing But Trouble. What the hell, right? Again, crazy things seem normal; normal things seem crazy.