Halloween is the greatest movie of all time

Halloween. With that trailer just coming out and looking awesome, figured I'd rewatch for the 10+ time in June. Greatest movie of all time. Totally genre transforming horror flick. Super fond of the flick as a kiddo. Remember watching this with my grandma with Sammy Terry hosting and cutting in during the commercials. I was five, max. That was the local ghoul on the Indianapolis local station. He was dope. The original guy, Bob Crane, died a few years back. His son does it now. He is great too. Mostly appearances but does make it on the electric TV machine sometimes. Starlite Drive-in here in Bloomington hosted him the last two years. It was a great fucking time. My childhood horror host and my favorite place in town to catch a flick. Matter of fact, we watched this movie at the show two years ago. Fucking dope.

Anywho, this is the only one that matters for the upcoming movie. Sort of see why as this is the only one that is god tier. It's credited as sort of starting the slasher genre even though Texas Chainsaw predates it. This did, I guess, layout most of the rules that came to define the genre. Stuff like if you bone or do drugs you die. Stay "pure" then you get brutalized but live. Yay, feminism. But this movie isn't like that. I think the other girls were drinking and making questionable decisions which kept their guards down and thus they died. Jamie Lee Curtis was baby sitting so didn't do any drinking or boning. Thus she was alert and also lucked out and got away. But like in real life, if you survive that shit then it is brutal and you are probably fucked. 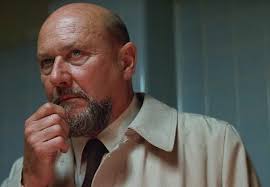 Pros: Beautiful ladies. The women who play Annie and Lynda are seriously attractive. As was Jamie Lee Curtis. Totally a game-changing horror movie at the time. Donald Pleasence as Dr. Loomis is his career defining role. The version where he speaks to the psyche board (I think this is the extended TV version) is even more solid. Stays relevant after 40 years. Brutal when she is banging on the neighbors' front doors and no one tries to help her (which was based on something that really happened and was the first scene Carpenter thought of).

Cons: Fucking animal violence. Characters are a bit on the one-dimensional side. Sort of drags on more than I remembered.

Most people probably know the gist of the movie by now. Opens with a little kid stabbing his sister to death POV style in 1963. Cut to 15 years later and he is a maniac who escapes a mental hospital the day his doctor is coming to transfer him to a more secure location. From there he heads back to his home town of Haddonfield, Illinois where he shows up on Halloween night to kill "teenage" kids. Directed and scored wonderfully by master of horror John Carpenter, the movie stars Jamie Lee Curtis (in her first feature film) as Laurie Strode, Donald Pleasence as Loomis, and Nick Castle as Michael Myers/The Shape. Playing Laurie's hotty friends are P. J. Soles as Lynda Van Der Klok and Nancy Kyes as Annie Brackett.

On the hotties, Annie (the dark curly haired one) was like my childhood crush. She aged pretty well too. Now she likes more like a professor that used to have it going on but still is attractive in that way. She was like 30 in this movie by the by. Looks amazing in a man's shirt and knee-high socks. She dies brutally. The other girl, P.J. Soles, has a sort of cult status among horror fans. For example, hard rock band from the 1990s/early 2000s Local H had an album they titled "Whatever Happened to P.J. Soles?" after her. She is pretty funny too. Like there is a scene when JLC sees Michael watching them and the ominous music comes on. Someone, I think JLC, says that she forgot her math book or something. P.J. then drones on in the background about how she forgot her math book and Spanish book and science book and all the other books she forgot. "Who needs books, anyway," she says. We get a little bit of gratuitous nudity from this dumb, pretty girl (this was one of the scenes they show in Scream if I am not mistaken). She dies horribly as well. So basically all of Laurie's buddies are dead which sucks for her. Big time for the buddies.

Something sort of weird I found in my half-assed research of the film was that the little girl who played Lindsey, one Kyle Richards, ended up growing up to be a reality TV star on one of the incarnations of The Real Housewives this one of the Beverly Hills persuasion. I just saw her on The Joel McHale Show with Joel McHale in a clip where one of the housewives was being ridiculous so it looks like things are going well for her. At least she has obscene wealth going

Nitpicky shit... A little thing that comes up every once in a while and that they say in the trailer for the new movie. It is this misconception that Michael killed three people on Halloween in 1978. Well, dude actually killed four when you count the guy in the bush (that maybe they never found but that seems unlikely since they found the car). I am not sure where this came from. In the sequel that came out in 1981 they mention the total killed and it seems to have not listed this either. I guess they just forget about this guy because he flashes on screen so briefly and it doesn't show the killing.

Another thing is when the sheriff yells at Loomis, "damn you for letting him go!" This rage is totally misplaced. Loomis did everything he could to keep him locked up in a supermax. And it's not like Michael like got out on parole or something. Dude fucking escaped because the powers that be didn't listen to Loomis. And now here he is trying to stop the guy. Fuck that dude for talking shit.

Do not fucking like it when animals die in movies. In this one we get word that Micheal killed and ate something when hiding out in his childhood home. Later, at the house Annie is babysitting at, Micheal then kills a German Shepard that is barking at him and shit. It is obvious in the flich that the dog is still alive but still. Then no one mentions the dog the rest of the movie. Shitty dog owners. Whatever.

The only other on screen death is P.J.'s dorky boyfriend. Michael Myers, with his superhuman strength, picks him up by the neck and holds him up with one hand before choking him out/stabbing him in the gut. I think this the first time that that happens in a movie. The guy was wearing a sheet and glasses, both of which Michael puts on over his coveralls and mask to like trick P.J. or whatever. After he murders her he then displays her in the bed with his sister's stolen tombstone which doesn't make a ton of sense. This begs the question what exactly his motivation for all this is. I'm sort of guessing it's sexual but who knows really.

Lastly, Michael was always sort of a supernatural being. He has super strength. He gets stabbed in the neck with a needle, is jabbed at with a hanger, and he takes multiple gunshots from Loomis at the end. Curious if they are going to downplay that stuff in the new one. Will have to wait and see I guess.