Freddy vs. Jason is the greatest movie of all time 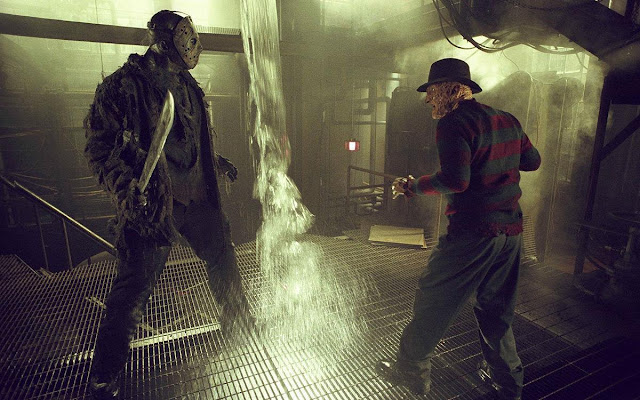 It has taken me a year to get here but I'm finally there. All of the Friday the 13th and Nightmare on Elm Street movies. The end of two franchises. That is 19 total films. Most of them considered terrible. Personally, I was kinda surprised at how watchable they were. The Jason movies especially which I remembered as just being complete trash. They were, I guess, from a critical standpoint. But what can you say? They gave the people what they want. Gnarly kills, hot chick gratuitous nudity, and just enough plot to keep it interesting. Plus we get to hear Robert Englund say "bitch" a million times. After all that, finally getting around to Freddy vs. Jason. The two heavy weights of horror going at. Greatest movie of all time right there. 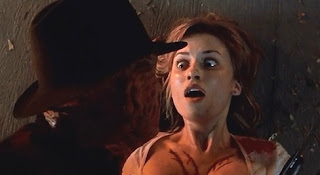 For people my age or a little older, late 30s/40s, this was over a decade coming and a super big deal. I remember before this came out I was at a party with some kid who was in a focus group for the flick. This was early summer 2003. He regaled like 30 people at this soiree with the entire plot of the movie and everyone was enthralled. It was one of the strangest communal experiences I've ever had; but this sort of shows you how guys and girls, at least the breed I hung out with, were losing their minds with anticipation for this movie... And then it came out and most people were disappointed. Other than some nitpicks, those people are wrong (though I doubt I'll ever watch it again, twice was definitely enough). This is definitely the best way these two franchises could have ended.

Rotten Tomato Consensus: Fans of the two horror franchises will enjoy this showdown. But for everyone else, it's the same old slice and dice.

Cons: The homophobia doesn't age well. Most the teens are annoying. The plot doesn't make a whole lot of sense.

Gist here is Freddy Krueger (played by Robert Englund, per use) and Jason Voorhees get it on and kill teens between their battle scenes. That's it, pretty much. Ignoring Jason X and New Nightmare, both characters start out in hell following the events of Freddy's Dead: The Final Nightmare and Jason Goes to Hell. There is a surprising amount of Jason and Freddy flying around in the flick. The movie was directed by Ronny Yu whose previous work included Bride of Chucky and a bunch of shit I've never seen. The teens include Monica Keena, Chris Marquette, Jason Ritter, and Kelly Rowland from Destiny's Child. All of these "kids" are people you sort of recognize but have no idea where from. Lot of frosted tips among them. Playing Jason in this one is Ken Kirzinger which pissed the hell out of Kane Hodder, who played Jason in the previous four films and pushed hard to make this film happen. Kirzinger is fucking enormous and apparently why they went with him over Hodder who New Line, the studio, dissed for being too short. Shit is cold blooded. But Kirzinger actually appeared in Friday 13th Part VIII: Jason Takes Manhattan as a cook that gets tooled on and a as double for Jason in various scenes.

Lets get into it. So both characters, who are in hell, get their own little intros. For Freddy, we get the standard toying with and murdering a child (thankfully off screen). While this is happening an angry mob is forming outside of his house while he gloats and looks at newspaper articles he has in his boiler room about going free on a technicality. Unacceptable to the mob, they break in and torch him. So yeah, it starts like basically every other movie in the franchise. As for Jason, we first see a chick at Crystal Lake get naked, go for a swim, see Jason, run, and die. Freddy shows up as Jason's mother around here, telling him to go kill on Elm Street which like breaks him out of hell, I guess. We later find that Freddy has to build his strength up to kill in the dream world by having Jason kill in the real world or something. It doesn't make a whole lot of sense so it is best not to dwell on how we get anywhere in this movie.

Some shit of note here. Parents on Elm Street just fucking love drugging their kids to get them to sleep. Every one of these Freddy movies has a kid that won't sleep because you know Freddy is kill his/her friends and that kid's parents slip sleeping pills in their soup or whatever. In every damn movie! This is no exception as the survivor girl's dad does this to her, nearly getting her killed even though this guy has clearly had run ins with the dream killer.

The nadir of the flick comes near the end when Destiny's Child tries to piss Freddy off and have him come at her, leading him away from the survivor chick. She does this by first questioning his manhood/penis size and then calling him a "faggot". This is 2003. They should have fucking known better. This was truly appalling when I saw this in the theater and people gasped at how inappropriate it was even 15 years ago and it has only aged worse since then.

Anywho, favorite scene is definitely where Freddy and Jason attend a rave which ends in carnage. The teens attend said rave after several of their buds were killed like the day before. No time to mourn; party on, I guess. One of the chicks, who's asshole boyfriend was the first one to die, shows up and gets wasted. She gets fucked up and passes out which brings Freddy around. While this stuff is going down, some other asshole shows up and sexually assaults her. Right before Freddy kills her in the dream world though, Jason shows up and murders her and her #MeToo. From there Jason goes to said kegger where like hundreds of 30 year old high school students have gathered. When Jason goes to get a beer or something, some idiot stops him and is like "this ain't a Halloween party! Why don't you find yourself a pig to fuck," and Jason twists his head around. The dude's buddy then sets Jason on fire which just pisses him off. Now you have a flaming, irate Jason just murdering the shit out of everyone. Even Freddy is like we have to get this guy under control. It's great.

That eventually leads to this Jason Mewes type stoner character to getting possessed by Freddy as his plan is to find a way to knock Jason out in the real world since the dude doesn't really sleep and then finish him off in the dream world. The way he goes about this is when the stoner passes out after a little horribly timed "joint break" during a hospital breakout, don't ask, and shows up as a ridiculous looking CGI, Alice in Wonderland style caterpillar. Stoned, Freddy climbs down the guys throat and controls him in the real world. When his friends are like, lets get out of here, he drops a very Freddy line with "let me handle this, bitch!" Oh that Freddy Kruger and the word "bitch". He fucking loves it. Anyway, he ends up tranquing Jason and then coming at him where he has the advantage which doesn't work. Long story short, the survivor girl eventually goes to the dream world and pulls Freddy into the real world where the two killers have their final showdown. Did I mention this movie was confusing?

Seems like a good time to bring up the best line and summary of the movie. It comes when they are going over some insane strategy to killer off the two immortal murderers and someone ask how any of this makes sense. The Jason Mewes dude then, in very Jason Mewes fashion, screams, "you don't get it, do you, nothing makes sense!" Watch the movie and you'll see.

As far as who comes out on top, Jason definitely wins the movie. The final fight, which is insane, sort of ends with Jason ripping off Freddy's arm for like the fifth time in the movie. From there there is a massive explosion set up by the kids and we get more Freddy and Jason flying through the air. This time like 100 feet into the lake. You think it's over if you've never seen a horror movie when Freddy busts out of the lake and comes at the surviving teens with Jason's machete in his remaining arm. But wait, Jason comes out of the water with Freddy's severed arm and stabs him with it, which is a nice touch. The survivor girl then finishes him off with a "welcome to my world, bitch," and chops his head off with the machete. In the final scene we see Jason crawling out of the water with Freddy's severed head in his hand. Freddy gives a suggestive wink but he is obviously in a pretty bad way. So Jason is free to skull fuck him or whatever before whatever goes down in Jason X. And that is the end of both fucking franchises. Thank fuck both of them and thank fuck that it's over. Jesus shit Christ.