Waxwork is the greatest movie of all time 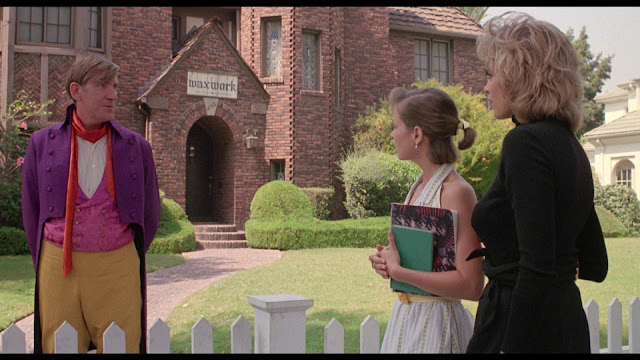 The cover of Waxwork scared the piss out of me as a kid. Have distinct memories of looking at it and thinking "fuck nope" as a child when we went to the video rental place down street. I maybe didn't like little people (or something) as nothing really scared me back then. But this cover, main, was too much. Up until I watched this flick I was sure that was Tattoo from Fantasy Island (the "de plane, de plane!" guy), but it's Alf (for real). I had ongoing dreams about a movie that I had mentally constructed based on this image up at least through junior high, which is just nuts. So I finally got around watching it and holy shit balls this movie was amazing. Not your typical wax museum movie, this shit complete blew me and my female companion away with its unexpected greatness. In fact--"is he gonna?" you ask--Waxwork is the greatest movie of all time.

Pros: Super self-aware and humorous. Meta-horror is the big draw here, knocking it out of the park long before Scream or New Nightmare. Solid acting (with a few exceptions) with some horror chops. Unique premise.

Cons: Can't think of anything other than it's not better known.

Basic gist is that a group of unlikeable idiot college students meet an immortal/evil owner (played by David Warner from The Omen) of a wax museum who invites them over to check out his collection. The displays end up being magic death traps that ensnare most of them one at a time. If the magician/owner dude completes the set of the 18 most evil beings to ever "live", then the evil spills out into the real world and what have you.

The evil being are as follows: the Marquis de Sade, the werewolf, Count Dracula, the Golem, the Phantom of the Opera, the Mummy (which curb stomps his dude), zombies from Night of the Living Dead, Frankenstein, Jack the Ripper, the Invisible Man, some voodoo guy, a witch, a snake dude, pods from Invasion of the Body Snatchers, Rosemary's Baby, a generic axe murderer/lumberjack dude, an alien, a Little Shop of Horrors style giant talking venus flytrap, and Dr. Jekyll and Mr. Hyde. There were supposed to be three other displays that ended up getting left out for legal reasons: Jason Voorhees from the Friday the 13th franchise, five children from Village of the Damned (1960), and The Thing (1982). Those would have been awesome but they didn't happen. 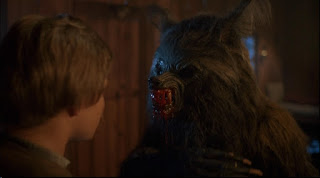 The movie managed to intrigue right from the get down, opening with murder/robbery, followed by a rich piece of shit, played by one Zach Galligan (who was the dip shit pet owner in Gremlins that got them wet and fed them after midnight), named Mark Loftmore who wants his fucking ciggy and his coffees. His mom, a real buzz kill, tells him no for some reason as he is going to be late for college like he gives shit. But his butler brings that shit out to him and he makes his way off in his Rolls Royce or whatever. Totally relatable, this guy.

Anyway, he makes it to class and is fucking late. He gets called out for it, the professor yells at him, telling him that he looks forward to reading his research paper on whatever dude is droning on about that next morning. He doesn't give a shit though and just starts openly talking with his buddies which leads the professor to just keep tacking on pages to the punishment essay. We later see why he doesn't give a shit as he outsources the assignment out to some chick who can barely speak English. He reads it, it's all gibberish, he turns it in and the work is so bad that he gets expelled which is all kinds of funny.

Dudes friends consist of China Webster (Michelle Johnson), Sarah Brightman (Deborah Foreman who was Muffy/Buffy in April Fools whom I will be referring to as Muffy forevermore), Gemma (Clare Carey), James (Eric Brown), and Tony (Dana Ashbrook who is Bobby Briggs in Twin Peaks and, yep, I'm just going to call him Bobby for the rest of this thing here). Both Muffy and China are real lookers. They all go to watch China's, who Mark like might have dated and is still into, boyfriend play football while they just enjoy their obscene wealth or whatever. China talks about doing him, openly, while Mark gets pissed. First off, this guy is such a goddamned meathead and is revolting and vulgar AF the moment we meet him. Second, this football practice is fucking insane. They are going all out like they are playing for the Super Bowl while simultaneously never playing before. The hits are brutal and completely illegal and likely to end in injury and possibly death. Like how China's dude just fucking sucker punches a teammate during a random practice the day before a game. If you've played football you know how fucking crazy this is. This scene alone is worth the watch. I'd link it but I couldn't find it online anywhere.

Per David Warner's invite, the group shows up at the mansion at midnight. The creepy midget lets them in and acts pissed that there aren't more of them. They go explore the museum each on their own like idiots. Bobby, who is a fucking tool in this movie, is the first one to fuck up when drops his zippo behind the rope of a wolfman exhibit. When you pass through the ropes you enter that dimension is how this works. So what happens to Bobby is that John Rhys-Davies, aka Gimli from The Lord of the Rings, shows up, turns into a werewoof, and bites him. He starts to turn and some dudes come and shoot him. He is now part of the exhibit. That's how they get you, apparently. Meanwhile, China is in the Count Dracula exhibit where she is served raw meat drenched in blood. They keep saying stuff like "the sauce makes the dish," and "our guest doesn't like the sauce." She does eat it in the end (IRL it was plums and corn syrup) which she later finds out was the leg of her fiancee in the wax world (don't ask). She ends up killing a bunch of vamps but Dracula hypmerizes with his eyes and mullet.

Muffy and Mark, for their part, get locked in the Marquis de Sade exhibit and the George A. Romero rooms respectively. Mark gets out and pops into Muffy's Marquis de Sade room. He is whipping her and she is super into it. She's into some kinky shit and the Marquis de Sade boasts that he just gave her her first orgasm. Mark snaps her out of it though and they escape leaving the evil folk two short of their set but their idiot friends eventually come around to die, basically. In the meantime Muffy and Mark figure it all out with the help of some old-timey locals who are part of some secret society. Once shit hits the fan at the end with all the monsters on the loose and what not these guys show up out of nowhere and help save the day. In the battle at the end we see a dude shooting a baby and another killing a vampire bat with a shotgun at 0-range whilst throwing in a "make my day." The ending is pure chaos with ridiculous fighting, a horrible looking fire which is just like a poster with holes poked in the windows, a zombie hand that sets up Waxwork II: Lost in Time, and they throw in some blue lightning in there too as it is 1988. Again, greatest film of all time.