Tourist Trap is the greatest movie of all time 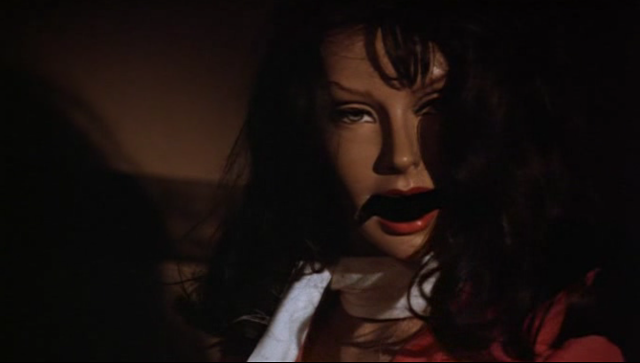 Tourist Trap is all kinds of WTF. This film is about a telekinetic mannequin making murderer. So, yeah. It feels like they were making a Vincent Price type movie but veered toward Texas Chainsaw/Halloween after those became big and threw in some Psycho for no reason. More of the traditional wax museum movies as opposed to Waxwork but with way more insanity. Not gonna lie, this disturbing flick pushed my greatest movie of all time streak, but it had enough redeeming qualities in a total shit show kind of way. Therefore, Tourist Trap was the greatest movie of all time.

Pros: Uniquely weird. Extremely creepy. If you are scared of mannequins, then this movie is completely terrifying. Young Midge (Tonya Roberts) from That '70s Show looking solid. Another pretty lady in this Robin Sherwood woman wearing the heart sunglasses. Get some sweet Chuck Conners yucking it up.

Cons: Killer is always exactly where he needs to be like he can teleport or something. Movie is all over the place. Last 20 minutes sort of fuck the whole movie up.

Gist of Tourist Trap, a 1979 flick directed David Schmoeller who did the first Puppetmaster movie, is that five college-aged kids end up getting off the highway when a pair gets a flat tire. While looking for the friend Woody, who dresses like an asshole and dies in the opening scene, they come across a closed roadside attraction featuring animatronic mannequins (and a swimming hole!). These mannequins come to life, sort of singing, before their creator, (Spoiler) Connors, who gives them supernatural powers and uses them to kill and create more mannequins. Again, weird shit. In addition to Connors (The Rifleman himself), Roberts (who was also a Bond girl [A View to Kill]), and Sherwood, the movie stars survivor girl Jocelyn Jones, Keith McDermott, and Jon Van Ness, none of whom I've ever seen. 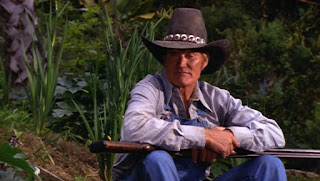 One of the weird things from this movie was a scene at the beginning with promised nudity that doesn't happen. While sort of looking for their lost friend, the three ladies find this little swimming hole and decide to take a dip. The survivor girl is like, "But I don't have a bathing suit... :(." But either Midge or the other chick says something like "who needs a bathing suit" when you have gratuitous nudity! But no. No boobs. Just a lot of standing in nipple-high water. Just as well (for them) though since Conners shows up with a gun talking shit. He does manage to come off as sane though and they all go to his place while they look/wait for their friend and get their VW Thing fixed as it just suddenly died when they got to the gas station/tourist stop.

Most of the weirdness from the movie are a result from these damn animatronic mannequins and what they can do. For example, after the survivor girl gets knocked out, she is placed in a bed in the house of horrors. When she comes to, this woman is taking care of her. It is implied that it is Connors's wife. We later learn that Connors found his wife and his brother getting it on. This gave him "a legal right to kill them both." While this is the 1970's and possible Texas, I am pretty sure that is not a legal right you have. So what is up with that lady that was helping her? Well, we later see that dude is insane with the animatronics. The people seem super real and are programmed to basically live their best life like normal humans. This shit sort of gives Connors a Norman Bates vibe which is pretty played out. This becomes apparent at the end when one of the guys shows up to save her and Connors pulls off his arm and head and we see that dude is totes not alive and is in fact in pieces. Welp, didn't see that shit coming. Connors apparently did this in like an hour by the by.

This was one of the most WTF things I have ever seen and led to a total train wreck of a finale. So the survivor girl sort of has this mental break. Connors dances around with his wife/mannequin and she comes alive as he swings her around. It is unclear if this is really happening or if she is crazy. In any case, she snaps out of it and axes Connors in the neck, killing him and silencing the mannequins. The next thing we see is the survivor girl driving down the road with her friends who are all dead and in puppet form while she has a huge, insane smile on her face. Um, holy shit. That wasn't terrifying or anything. Jesus. Thinking about, maybe she too was a puppet, just wound up to live her best life. Maybe we all are just animatronic puppets, just looking into the abyss of time, waiting for our programming to run out. And on that... 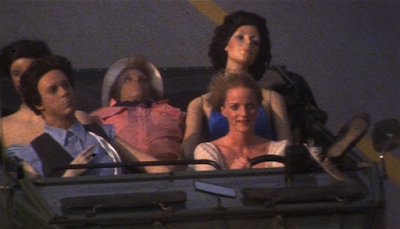