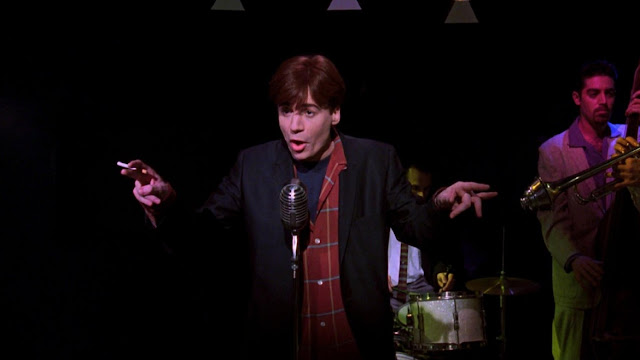 So I Married an Axe Murderer. One of my faves as a kid. This is what I thought being an adult would be like. Reading poetry, drinking giant latte bowls at coffee shops, being afraid of commitment but still marrying a beautiful lady who you believe may be a serial killer because of some shit you read in a tabloid. Spoiler, it is! Greatest movie of all time.

Pros: Nice little homage to other marital murder mystery flicks as well as a smart spoof on love in the 90's and serial killers. Harriet, played by one Nancy Travis, is a super cute lady. Stuart Mackenzie, who is Mike Myers's character's (Charlie) dad and is also played by Mike Myers, is hilarious. The character actress Amanda Plummer, who plays Harriet's sister and was Honey Bunny in Pulp Fiction, is great and unhinged, as per use.

Cons: Not exactly thrilled with how they play cute with dead animal corpses at the Harriet's Meat's of the World store. A play on meet cute that is fucking dumb and overplayed, at least now (like in iZombie). Charlie is sort of a whiny bitch. Basically everything with Anthony LaPaglia's character, Tony Giardino, is irritating.

The basic gist of the film is that Charlie--who like every Gen Xer on the picture shows is a disaffected, commitment phobic cynic--a poet, meets his dream girl, Harriet ("Harriet, sweet Harriet"), but as he is wont to do, seems to invent faults that keep him from truly committing, in this case that she is a serial killer. She does move around a lot and works as a butcher, so yeah, prolly. He got the idea in his head after reading about a black widow murder in a tabloid. By some miracle it turns out he may not be that far off. Spoiler.

Overall the film has a Hitchcock/Jerry Lewis collaboration vibe, combining dark subject matter with zany comedy. It is at surreal. None more so than when Charlie volunteers to help Harriet with running the butcher shop where he does slapstick with entrails and animal bits in a disturbing take on flirting. It sort of made me sick to my stomach (I'm a vegetarian). It is supposed to be shocking, and is, but as a comedic device, real dead animals doesn't work. When the film works though it is a solid example of a murder mystery comedy reminiscent of Manhattan Murder Mystery by Woody Allen. Had Charlie been Jewish instead of Scottish then it would have pretty much been a Woody Allen movie.

Charlie lives a pretty sweet life. He makes his living as a poet (which is unheard of), his best friend is above the law (he's a cop), his family and women seem to like him, and he has a very sweet, very pretty lady in Harriet who adores him. Shit is pretty fucking sweet, right? Well, Charlie is one of those Gen X dudes in a film in the 1990's so he can't just chill and be fucking happy. He has to self-destruct. He is cold and a dick to Harriet and ends up leaving her. Not for the reason he should have, i.e. the horrendous meeting with Honey Bunny, who SPOILER is the killer, but instead because he is paranoid and insane, asking his cop bro Tony to fucking investigate her on these murders which he does.

Little something for the people of Earth, here, when you go to someone's home for some sexy time and there is an extremely awkward or unsettling encounter with a family member or a roommate, then you need to be on your toes because shit will go down as that person (the family member or roommate or whatever) is insane. Pro tip for you there.

ANYwho, the way Charlie wrecks his good thing is he gets all fucking paranoid about an article he opened to randomly in the Weekly World News between articles about Bill Clinton fathering Bat Boy and Elvis Presley being spotted alive at a Burger King about a woman they call Mrs. X whose husbands all went missing under bizarre circumstances. He gets cop bud Tony to fucking investigate though and he is like, "uh, it's probably not her, bra," but Charlie still acts like a freak before eventually breaking up with her over it because he is a fucking nut job.

So basically Charlie is all moody and dejected throughout most of the rest of the movie until Tony tells him that a killer confessed in the Mrs. X case and he and Harriet make up and decide to get married. But dude is still a freak, with somewhat good reason as it turns out since someone, the sister, is indeed trying to kill him. But whatevs. Charlie is still an idiot, which is what makes the movie great. Also, this happens.

Just to recap, Myers plays Charlie MacKenzie, a man afraid of commitment, until he meets Harriet (Travis), who works at a butcher shop and may be a serial killer. Myers also plays his own character's father, Stuart. Very Christ like of that Myers (he fathered his child which was also himself). This character was the fucking best. I still often quote old Stuart Mackenzie saying "we've got a piper down!" every time I see someone playing the bagpipes on TV or IRL, Also any time anyone is in my way I just randomly yell, "Heeed! Doon! Noo!" Good shit. And with this, some sweet Stuart action, I bid you adieux.