Jason X is the greatest movie of all time 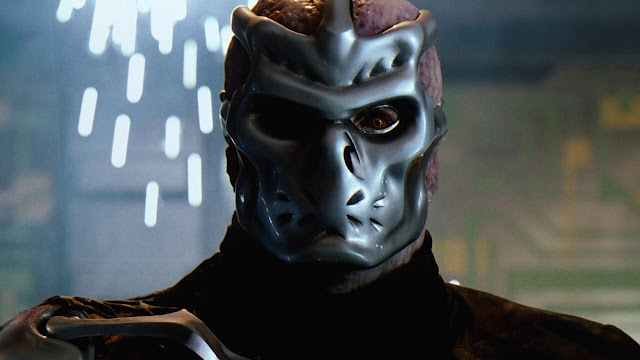 Jason X. Here we are. Ten Friday the 13th movies in and now we are in space. Not coincidentally, this is the first Candadian Jason. You may know how I feel about Canadian horror films. As you might have guessed, this movie is over-the-top and insane. More comedy than horror, it is actually a lot of fun if you go in not taking it seriously. With the premise, how could you? This film came about with Freddy v. Jason on the horizon. Not wanting to mess with the continuity of that, they set the events of the film after that movie. Might as well go way past that, I guess is the thinking. This movie knows what it is and commits to it. What it is is a solid parody/homage to the Jason brand and horror/sci-fi in general. It's Jason in outer space. It's not scary, it's ridiculous. It's like they replaced the xenomorph with Jason in Alien which is a hell of a setup. For these reasons Jason X is the greatest film of all time.

Rotten Tomato Consensus: Jason goes to the future, but the story is still stuck in the past.

Pros: Total over-the-top slapstick esque comedy more than horror, which was where these movies. Surprisingly decent kills (especially the one where he smashes the chick's face) with a high body count. Two pretty hologram ladies try to party with Jason and are hilarious. A strange David Cronenberg cameo. Extra cheese, this flick.

Cons: Seems super low budget (it was not and was actually the first movie shot all on digital). The acting isn't really the best (but what do you expect?). Not a very imaginative movie.

Gist of the movie basically the same as the nine others that came before it, just in space. It even features Kane Hodder as Jason, for the last time actually, making this the fourth time he played the character. The other movies where he played the slasher were Friday the 13th Part VII: The New Blood, Friday the 13th Part VIII: Jason Takes Manhattan, and Jason Goes to Hell.

Here, a group of space people from about now visiting Earth (which is no longer inhabitable) pick up Jason's body from Camp Crystal Lake. He kills everyone on the ship, including Canadian director Cronenberg who did Scanners (1981), Videodrome, The Dead Zone (1983), and The Fly (1986) among others, except for survivor girl Rowan (Lexa Doig) who subdues the killer by cryogenically freezing him and herself. Rowan was only one among them that didn't want to study him to make super soldiers or whatever. The pair remain in stasis for the next 400 years until a new group of space people and their android (Lisa Ryder) with no nips find the ship, wake up Jason, and become murder-fu as the killer gets a much needed upgrade via the ships nanobots. The crew must now figure out a way to survive with Uber Jason on their hands. Uber Jason is just an "improved" more futuristic (i.e. ridiculous) looking Jason. All metal and shit. I mentioned Doig and Ryder up there because they both ended up in this show Andromeda together except with their roles reversed, more or less, with Doig playing the cyborg and Ryder playing the tough as nails leader chick, which is a weird coincidence.

The first thing you'll notice about this motley crew are the poor man's Seth Green, the 10/10 annoying stoner dude, and the poor man's Taye Diggs. The stoner dude gets his arm shopped off by Jason's machete just being a dip shit before the killer even wakes up. But no big, nanobots put him back together again. The group decides to bring the chick and Jason back with them and see what they are all about leaving one doctor alone with the killer while the rest of them check out the "hot" chick. Eventually, during his autopsy, Jason thaws out and immediately starts murdering when he takes the doctor's head in liquid nitrogen before smashing it into tiny pieces Demolition Man style. It's a dope kill but Mythbusters specifically disproved frozen head smash kill. Basically liquid nitrogen evaporates too quickly to freeze shit like that. Don't get me wrong, it will fuck you up if you aren't careful, but you aren't going to instantly freeze you whole head to the core. There are all kinds of idiots on YouTube putting their hands in it and splashing their faces and so forth. Like this guy:


Another solid kill comes when Jason slams a guy onto a giant drill bit. The guy slowly slides down the shaft, spinning on the grooves. The USA Today review also mentioned this kill as somewhat noteworthy, saying "Jason gets a futuristic makeover and annihilates someone using a giant screwing tool. After sitting through Jason's latest exploits, the audience may find itself identifying with that victim in particular." One of my personal faves though was the Taye Diggs looking dude. He gets stabbed by Jason once and says "It's gonna take more than that to kill me." Then he gets stabbed again and says, "Yeah, that should do it." Yeah, that type of flick.

By far the best scene in the film though comes when Jason is walking around on the holodeck, stalking the astronauts. To buy some time they pop that bitch on, setting to Camp Crystal Lake in 1980. These two hologram chicks show up and try to show Jason a good time, telling him they love "drinking beer, smoking pot, and having premarital sex." My kind of chicks but not this guy's as Jason beats one to death with the other.

So yeah, that is Jason X in a nutshell there. Jason gets shot out into space multiple times before his mask falls back to Earth and lands at Crystal Lake setting up a possible sequel that never came. And I've made it to Freddy v. Jason, finally. Excited about that shit.