Intruder is the greatest film of all time 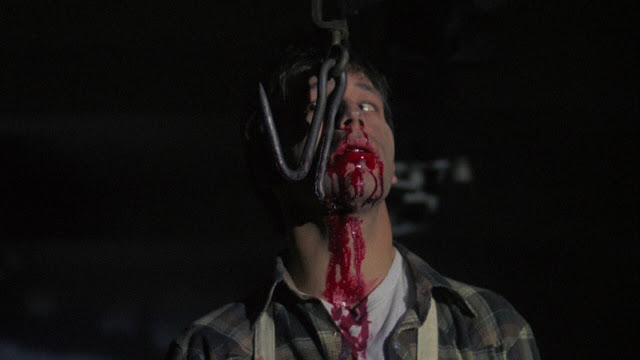 Great fucking movie, Intruder.  Watched it for Bruce Campbell and Sam Raimi (pictured above with the meat hook in his noodle) as they get top billing on the front cover of the DVD. Come to find that Campbell is in the movie for maybe one minute and Raimi, for his part, gets a bit more screen time but dies early. On the back Renée Estevez (maybe because of her lineage?) is portrayed as the heroine but is actually the first character to die. Spoiler. That I don't care about at all, I guess. Though the studio thought this was necessary, to mislead us, the movie is still fantastic and is totally the greatest movie of all time.


The movie features a grocery store's overnight stock crew that are stalked and killed by a mysterious psychopath.The kills are phenomenal and are numerous. Directed by Scott Spiegel who co-wrote The Evil Dead, the movie features Sam (director of the Evil Dead movies, Spiderman, Drag Me to Hell, so forth) and Ted Raimi, Estevez sibling Renee, Tarantino producer Lawrence Bender, and Campbell who is in the movie for all of 35 seconds. The movie actually stars Elizabeth Cox, who is a total babe, as survivor girl Jennifer Ross and Dan Hicks as Bill Roberts who has worked his way up from butcher to co-owner.

Cons: Not exactly the most original movie I've ever seen. Takes a bit to get going.

Gist of Intruder is that the grocery store is closing its doors for good while the overnight crew works their last shifts. As they do, they are picked off one by one inside of the small market with items found in the store.

The movie opens to the world's longest intro. Just a full moon with credits over it. After five minutes of that we get some extended setting of the scene that we will be spending the next hour and a half or so: we see a crazed, mumbly old man, carts everywhere, slacker young people working their first jobs (for the most part), and a crazed ex-boyfriend that comes in and loses his mind, punching his ex (that should win her over), slamming Sam Raimi, and fighting all five dudes in the movie on his way out the store. Aldi's it's not. Not long after this idiot, who it is revealed just got out of jail for murder, comes back and tries to score with his ex. They are closing so they just let him go which is insane.

It's about here that they get the news that they are all out of a job. "Hear me out," says the owner and then fires everyone. The other owner is upset. Worked his way up from butcher to owner. He'll be alright though, I'm sure he'd work his way back up to owner from toilet scrubber or whatever at another grocery store. Following this scene is when the killing starts, oh ye.

Nine deaths total that include solid gore and gags. Some good ones include a kill with a meat saw, a hydraulic press, and a meat hook to the jugular. All of those kills were dope. The gags include eyeballs in with the olives, a hand in the lobster tank, a head in the cheese case, so forth. The killer also uses the owner's head as a puppet, which was darkly humorous.

In the end, once the killer has been revealed and it isn't the red herring ex-boyfriend, we have the one survivor babe who is forced to rely on her #MeToo to save her (which, yeah, fucked up). They actually team up on the killer, the chick stabs him with a knife that she pulled from Estevez and the dude cleaves the killer while he is attacking the survivor girl in a phone booth just outside the store. But this dude is unkillable, apparently, and when the cops roll up, one of those cops is indeed Bruce Campbell, the killer is all "they did it!" and the cops believe him even though there is no evidence. And that is the end of the movie! But I am sure that once the detectives get there they will piece together what really happened. That happens, right?

Oh, and last thing, notice in the credits that the post-production sound was done by Jay's Meat and Provision Company. I wouldn't trust any sound company that had "Meat" in their title. But that's just me though.

Dude thanks for all the reviews. Will be sure o keep this one ready for next film day