Deadpool 2 is the greatest movie of all time. 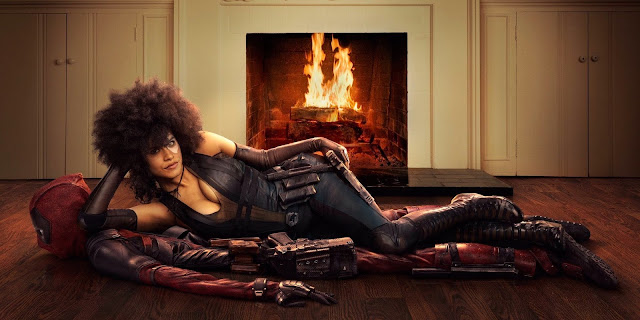 Oringal Deadpool was definitely my favorite super hero movie of all time. After one viewing, I like Deadpool 2 probably just as much. Just a heads up, I'm probably going to spoil the shit out of this bitch so read no further if you want to go in cold. Oh, by the by, Deadpool 2 is the greatest movie of all time. 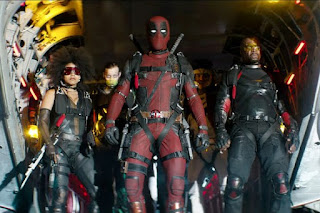 Rotten Tomato Consensus: Though it threatens to buckle under the weight of its meta gags, Deadpool 2 is a gory, gleeful lampoon of the superhero genre buoyed by Ryan Reynolds' undeniable charm.

Pros: Funny and fun. Great pacing. Casting is dope. Reynolds is the fucking man. That Zazie Beetz and Morena Baccarin are both pretty ladies. Get the best Deadpool rival/X-Men villain which I will spoil later.

Cons: The constant jokes get somewhat exhausting, I imagine it is more so on the second viewing. Deadpool is too fucking nice. 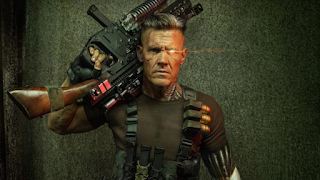 Spoilers... Deadpool 2 was fucking sick. Reynolds as Wade Wilson and his alter ego Deadpool goes berserk after his wife (Morena Baccarin) is killed, again, spoiler, eventually teams up with the X-Men... but straight up murders a guy while helping out a powerful and violent mutant child. Both Deadpool and the kid, Firefist played by Julian Dennison from Hunt for the Wilderpeople, get sent to mutant jail where time traveling mutant cyborg Cable (Josh Brolin who is also Thanos right now) comes to settle an old score... with the kid, going back in time to end him when it is easy, Terminator style. Turns out the kid grows up to be a shit. Firefist, however, turns out to be a lot harder to kill than expected and Deadpool goes from protecting him to trying to stop him, forming a team rival to X-Men, the X-Force. The 11th X-Men movie that may actually fit into that universe as we see a bunch of them behind a random door at the Xavier's School for Gifted Youngsters. The film also stars Beetz (ger) from the show Atlanta as Domino, Brianna Hildebrand as that Negasonic Teenage Warhead, Jack Kesy whom I've never seen before as Black Tom, Shioli Kutsuna is Yukio who is the NTW's girlfriend, T. J. Miller reprises his role as Weasel, and Karan Soni is back as even more irritating Dopinder. We also get cameos from Terry Crews, Brad Pitt (who is in the movie for all of three seconds max), and Bill Skarsgård who was Pennywise in the most recent It movie.

When I was checking the movie's IMDB page when I came across the plot summary provided by the studio that made the film, Twentieth Century Fox. It is a bit different and totally unrelated to the movie, which is fitting. It reads: "After surviving a near fatal bovine attack, a disfigured cafeteria chef (Wade Wilson) struggles to fulfill his dream of becoming Miami's hottest bartender, while also learning to cope with his lost sense of taste. Searching to regain his spice for life, as well as a flux capacitor, Wade must battle ninjas, the yakuza, and a pack of sexually aggressive canines, as he journeys around the world to discover the importance of family, friendship, and flavor - finding a new taste for adventure and earning the coveted coffee mug title of World's Best Lover." 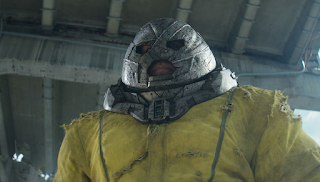 Okay, time to talk about the Juggernaut. Wow. That is tits. Only the second time he has been in the X-Men movies. First time he was remotely done right. The first he showed up was in X-Men: The Last Stand which was more or less universally hated (I thought it was okay but was disappointed while the girl I saw it with wanted to leave the movie--my tolerance for garbage is insane though). In that version of Juggernaut Vinnie Jones was more or less a normal sized dude with slight powers (he couldn't be stopped when he got going) who was irritating AF. Around that time there was that "I'm the Juggernaut, bitch" video that came out. It was considered pretty funny, though I didn't really get it, and it became sort of sort of hilarious to scream, "I'm the Juggernaut, bitch" at inappropriate times. What was super insane about ,X-Men: The Last Stand was that Vinnie Jones's character fucking said "I'm the Juggernaut, bitch!" which was fucking bananas. I thought for fucking sure he was going to say it in this flick as well but it didn't happen.


Anyway, now we have the truly massive Juggernaut (my favorite scene from any of the Deadpool comics was Juggernaut this size on a commercial flight) with his super strength, regeneration, unstoppable momentum, and metal helmet that keeps Charles Xavier, his brother (in the comics as least) from fucking with his mind (Magneto style). When he first showed up in this movie it was shocking. Deadpool, like the audience, breaks the fourth-wall to show what a super he is of one of his biggest enemies. Juggernaut, for his part, rips Wade in half which leads to him walking around with little baby legs, which was genuinely hilarious. But yeah, Juggernaut showing up was the best little surprise of the movie. It was sort of disappointing when they seemingly killed him off, "you can't kill him off already!", but then at the end you seem him pulling himself out of the pool he was being electrocuted in. Need that guy for the franchise, main!

Speaking of the future of the series, it's impossible to tell where the franchise is going as the timeline is completely shot to shit during the closing credits so make sure you stay put for that. What happens is the Negasonic Teenage Warhead fucks up bad. She "fixes" Cable's time machine and just gives it over to Wade who is like "I'm gonna abuse the shit out of this!" at which point she is like, "uh, I just really fucked up." Uh, yeah, dude goes back in time and basically made the whole movie sort of unnecessary with his time travelling. Immediately he stops the big twist that happens at the beginning of the movie and sets up everything that goes down. He is shown saving Peter who's the normal dude who joined them because it sounded fun, Deadpool was all "fuck yeah!" when he wanted to join X-Force though he was obviously going to die. Also, dude gets weird with it. He kills off the Deadpool from X-Men Origins: Wolverine, for example, and in a super meta-moment he kills a Ryan Reynolds just after he's finished reading the script for Green Lantern. So yeah, dope from start to the post credits.