Avengers: Infinity Wars is the greatest movie of all time

Avengers: Infinity Wars. Spoilers. Mad spoilers, bra. With a decade of Marvel Studios flicks, Marvel Cinematic Universe has all been building up to this. To give you an idea of the size, it is one of the most expensive movies ever made, Wikipedia lists the budget at $300-$400 million, it has the highest grossing weekend of all time and is already in the top 50 highest-grossing films ever. Most critics love that shit, too. All the action. All the feels. Greatest movie of all time.

Rotten Tomato Consensus: Avengers: Infinity War ably juggles a dizzying array of MCU heroes in the fight against their gravest threat yet, and the result is a thrilling, emotionally resonant blockbuster that (mostly) realizes its gargantuan ambitions.

Pros: Story is fucking solid. Even though there are like 400 people in it they do a good job of getting everyone a lot of screen time and telling how everyone sort of fits in. So much star power it is insane. Some truly shocking moments that are quite emotionally affecting. Thor continues to be hilarious and awesome.

Cons: Feel sort of nitpicky listing any of these as "cons" because the movie fucking ruled. It was just with the movie being so long there were just several little things to list, some more valid than others. First, I was not emotionally ready for the ending. Plus, knowing the bare minimum about comics, the weight of that ending is undercut by the fact that no one in comics ever dies. Thanos is sort of lame. Too much of the story relies on us giving a shit about Gamora (who probably gets the most screen time) which is tough because she has basically just been the love interest up to this point. Not enough Captain America and his click.

Gist of the Infinity War is that most but not all of the Avengers (notably missing were Ant-Man and Hawkeye) and some of their super buddies (the Guardians of the Galaxy, basically, and Dr. Strange and some Black Panther) get it on with the most powerful villain in the Marvel Universe, Thanso, who is going about trying to complete his little set of Infinity Stones which he wants to use to kill half of living things in the universe because of resources. Like Killmonger in Black Panther, he's not wrong, he's just an asshole. 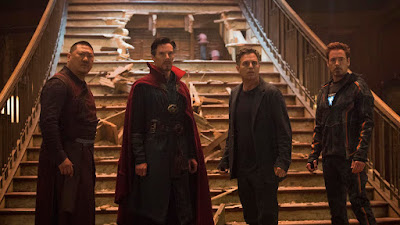 The movie was directed by Russo bros Anthony and Joe features the ensemble cast of all the usuals. Going back over the cast, this shit is insane. Basically this is a who's who list of Hollywood talent. See it listed is pretty cray. A partial list, in alphabetical order, includes Dave Bautista as Drax, Paul Bettany as Vision, Chadwick Boseman as Black Panther, Josh Brolin as Thanso, Don Cheadle as War Machine, Bradley Cooper as Rocket Raccoon, Benedict Cumberbatch as Dr. Strange, Benicio Del Toro as The Collector, Vin Diesel as Groot, Peter Dinklage as Eitri, Robert Downey Jr. as Iron Man, Chris Evans as Captain America, Karen Gillan as Nebula, Danai Gurira as Okoye, Chris Hemsworth as Thor, Tom Holland as Spider Man, Scarlett Johansson as Black Widow, Anthony Mackie as Falcon, Elizabeth Olsen as Scarlet Witch, Gwyneth Paltrow as Pepper Potts, Chris Pratt as Star-Lord, Mark Ruffalo as Hulk/Bruce Banner, Zoe Saldana as Gamora, and Sebastian Stan as Bucky. This only scratches the surface.

A lot of stuff I have been thinking about that I loved here. First, the film is book-ended by two scenes that were shocking as fu-uck. The one at the beginning which was just fucking nuts was when Thanos, already with the Power Stone in hand, hops on the spaceship with all the Asgardian refugees on it following the events of Thor: Ragnarok to strong arm the Space Stone in that there old Tesseract cube from the various flicks. In the process Hulk comes out of the woodwork to end this bullshit and gets beat the fuck down which was a serious WTF moment. With him out of the way, Thanos and his group of underlings called The Children of Thanos (consisting of Corvus Glaive, Ebony Maw, Proxima Midnight, and Cull Obsidian), they easily bitch Thor, kill Loki (played by Tom Hiddleston), and Heimdall (played by Idris Elba) before blowing up the ship, killing everyone but Thor (who just floats through space until the Guardians find him) and Hulk whom Heimdall beamed to Earth with the Bifrost before he met his end. Hell of a way to start things off, I'll tell you.

Then there is the ending which was a complete fucking shock. Obviously spoiling shit here so don't give me shit. At the end we have all the characters coming together in Wakanda, getting it on with Thanos, and seemingly sort of stopping him by destroying the final stone in his collection, the Mind Stone, by killing Vision. Woohoo. No. Thanos, who can bend time, space, reality, so forth, but generally chooses close quarter hand-to-hand, turns back time reassembling Vision and plucks the stone from his melon, killing him again. If you've seen Dr. Strange you should probably sort of expected this but if you are like me then you didn't think of it until it went down. It was cray AF. Thor shows up here with his newly forged hammah and smacks the shit out of Thanos who teleports the fuck out of there. Sort of think it is over or whatever but then they start disintegrating with half of them and half of all life in universe fucking dying. When Black Panther blew away it was too much, main. "No!" I yelled in my car at the drive in. We also lose all the Guardians except Rocket. Damn. But, yeah, after it's over its hard to know how to take all this death/the movie in general. Obviously all the ash characters can't stay gone. There are two more Black Panther movies coming out for Christ's sake.

Anywho, another thing of note here was that Thanos knew Tony Stark by name, which is interesting. Tony, for his part, claims that Thanos has been "inside my head"--or something like that--for six years which was the whole shit that went down in New York in the first Avengers movie. Thanos, on the other hand, seems to only have respect for one human,Tony, whom he sees as the main Avenger aka protector of earth or whatever, I guess. Regardless, they are obviously connected and what not and I'm thinking Tony will have to sacrifice himself or some such shit since Dr. Strange gave up an Infinity Stone to save his life though he said he would not do that just a few scenes before. But after Strange had his little vision, which is the only way it played out that they defeat Thanos, so he must need to live for that shit to play out.

Some other shit that I'll mention was that Dinklage shows up out of nowhere. He is a fucking dwarf but is a giant dwarf. He ends up being the tallest person in the movie which is probably a fucking wet dream for dude and what not. The best shit of the movie though was the Chris Hemsworth vs Chris Pratt doofus off where they both crack wise at each other despite Thor having just lost all his people in mass genocide and Star-Lord having just caused the end of half of all life in the universe because he is an idiot.

The last thing I shall mention is that this flick has really put out some dank ass memes. Most of them revolve around Thanos either looking ridiculous or being an asshole or obsessing over his stones. I leave you with these, some of my faves, for your viewing pleasure. 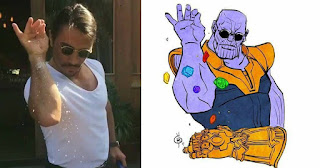 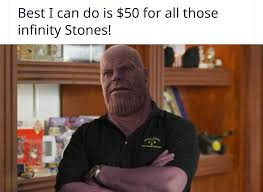 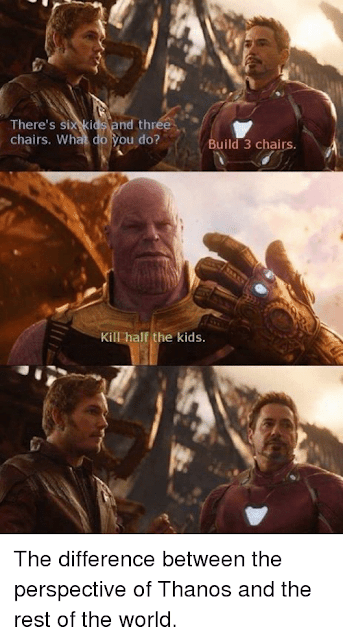 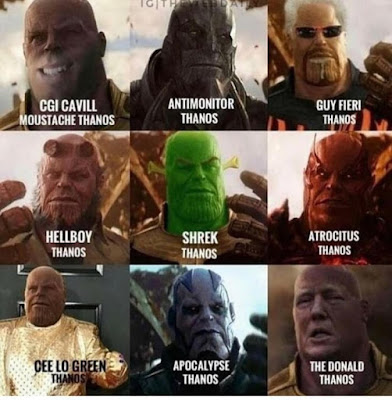