Annabelle: Creation is the worst movie of all time (though it was extremely scary)


I am not sure where we are in the Conjuring series here. I think this is the second prequel, fourth movie overall. The first one was impressively scary, the other two meh, and this one, while scary as shit, was not what I would call a good movie. It was only like two days ago that I saw this, yet I can't tell you much of what happened. This is the archetypal "cheap thrill". Crappy story but the director does a phenomenal job of scaring the piss out of me.

This movie starts out with a youngish family, a dad who makes dolls and a mom who is there, who have this playful little girl that dies when she is hit by a truck on a dirt road. From there we cut to 12 years in the future. The couple, the mom now crippled and the dad a broken shell of a man, now opens up their home to a nun and a group of orphans to "make amends". Of the orphans, there are six(ish) of them, only two of them are really important: the one with polio and little one. Things are pretty much immediately fucked but the horror ramps up when polio goes into the dead girl's room and finds the possessed doll, Annabelle. From there things escalate, leading to smoke monsters, demon dolls, possession, telekinetic disembowelment, nun flinging, scarecrow inhabitancy, so forth, which ultimately takes us to the start of the first Annabelle movie, the second in The Conjuring series.

Cons: Plot is forgettable. Feels a lot longer than it was (never a good sign). Run of the mill demon flick that doesn't offer anything new.

Notes:  The opening is Lynchian. We get the dad, Anthony LaPaglia whose biggest role is likely Jack Malone in Without a Trace, putting the finishing touches on the creepy-ass Annabelle doll. This is number 1 of 100. He is getting these little notes that say shit like "come find me" and what not. Eventually see they are being left by his daughter. Normal family from the 1940s or 50s or whenever this is from. Mom is Miranda Otto whom you may remember from The Lord of the Rings as Eowyn. She is barely on screen and her face is covered for a lot of it (later see it was an Annabelle mishap) but she is fine looking here. They go to church and we see some toy store owner that is like, "hey, do you have any more of those disturbing looking dolls (even though that one you made obviously said 1 of 100)? The kids just love those things!!!" Anyway, they get on the road and get a flat. While they are there on the side of the road, the little girl is hit by a truck and killed. 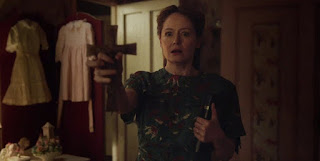 Next thing we see is a group of orphans getting off a bus with a nun and a priest (who does not stay with the ladies at the house). This is 12 years later. Really pull at the old heart strings. Give one of the orphans polio. Her name is Janice. The rest of the girls mistreat her, sort of. The early story focuses on her and her little buddy, Linda, who just want to get adopted. Fuck. Well, that first night Janice goes into the forbidden room and lets out the demon doll. Shit. The next day she goes to confessional and admits that she went to demon doll room. The nun gives her a bunch of shit for this, is like "you are going to get us kicked out of here and then you'll never get adopted." Ouch. Come to think of it, it's pretty inconsiderate having all these children into your home along with all these devil dolls hidden about the house. But Janice, we see, is weird so whatever. She steals the dead girl's picture off the wall which was bizarre. Why would anyone want that? 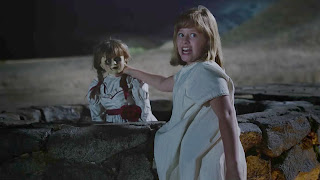 Several times throughout the movie Janice screams bloody murder just feet away from her sleeping housemates and no one wakes up. Around here we get the obligatory "I'll steal your soul!" line, which (SPOILER FOR THE REST OF THIS PARAGRAPH HERE) it does, eventually. She gets super creepy here. Her and the doll are inseparable. Linda takes the doll and throws it down a well which doesn't phase it. They need to fucking cunt punt the shit out of that fucking thing. They ultimately determine that it is too late for Janice and lock her possessed ass in the demon room with the doll. This is after all the demon murder and carnage, of course. When they all run out of the house, I thought for sure that the house was going to implode, Poltergeist style. When the police and such come to the home at the end of the movie, Janice is gone. That's weird everyone collectively says, but they are not very concerned. Should have been though as we see the girl getting adopted by the family that gets killed at the beginning of Annabelle. The flick then segues into that piece of shit movie. Roll credits.

The scariest parts of the film was probably the tea party scene when the mom character walks in on her dead daughter playing with the Annabelle doll. The mom has her cross out while the daughter is facing the opposite direction. As she steps closer, the daughter levitates and bones crack and break in disgusting jerking motions. The girl is possessed as fuck, coming at the mom all quick and unnaturally. It's disturbing. The most (maybe) unintentionally hilarious part of the movie, there are several of these moments, comes at the end after the priest comes back to the house to check everything out. He carrying Annabelle, is all, "the doll was possessed but isn't now." He then plops the doll down in front of the girls and is like "which one of you gets it?" Yeah, pretty sure a half hour is a little too soon to make jokes, if that is what it was.

Ultimately the thing I didn't like about the movie was how unbelievable it was. Part of the appeal of The Conjuring was that this was based on a "true" story and it felt real with some embellishments. The thing that sucked about that first Annabelle movie was that is was just a bunch of made up nonsense about where the doll came from that had no basis in reality. Basically, it was over-the-top absurd. This one doesn't go quite that far, but on the whole the plot is pretty ludicrous, though I'd put it second of the four on the most believable list, including The Conjuring 2 which was supposed based in reality as well.

I am extremely impressed along with your writing abilities, Thanks for this great share.