Spawn is certainly at the end of something 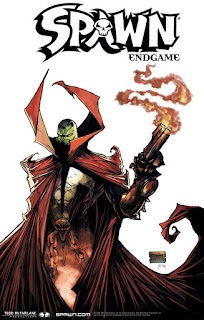 The June publication, Spawn: Endgame (Volume 1), which collects Spawn Issues 185-190 and marks the return of creator Todd McFarlane as writer, accomplishes the much hyped “New Players, New Game” slogan ripped from the ads proclaiming the new direction the comic will be taking by obliterating everything readers know about the first 17 or so years of its run. Unfortunately, that was about that the only thing the graphic novel made good on.

Some back-story about the series, pre Endgame: Spawn, which told the tale of damned CIA operative Al Simmons, who sold his soul to Malebolgia, a sort of demon leader, in exchange for a chance to return to the land of the living to see his wife and daughter again and get out of Hell which one could imagine doesn’t sound like a bad deal. But as most anyone knows, when dealings involve demons, one had better read the fine print very carefully, which Simmons apparently doesn’t do thoroughly enough, and comes back as a “Hellspawn,” which is akin to a General in Hells Army, who happens to be at war with Heaven and what not. 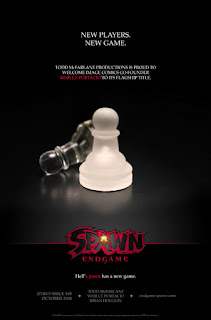 With the revamping of Spawn, this background information isn’t supposed to matter. The Endgame story arc was supposedly designed to be a “reader friendly” book for either people new to the series who don’t want to start from the very beginning or former fans who lost interest over the years of the publication’s varying quality. Is it working? God no. After months of ads, the new direction that Spawn is now taking is practically a screw you to long time fans who read the series, ehm, religiously.

Leading up to Issue #185, the first in the Endgame storyline, readers wondered what Spawn’s new start would be and what Todd McFarlane and company do with the last 30-something issues of the series. That is where the aforementioned betrayal asserts itself since in that issue the biggest shock in 17 years takes place seemingly out of nowhere for anyone who hasn’t followed the story in its entirety. That shock comes at the end of the issue, Part One in the collection, when McFarlane, after an awkwardly near wordless opening, it is confirmed that the antihero/title-character who has been the entire comic has been killed off by willing his own head to blow up.

This is problematic in a number of ways. First of all, in ridding himself of his protagonist, McFarlane takes virtually the only character any new reader knows anything about and says to hell with him. Secondly, nothing really gets explained so there is at best only a vague notion of what led Al down such a final decision which appears to have something to do with some kind of emotional crisis. As reviewer Robert Murray of Comics Bulletin summarizes the event, “if you haven't picked up a Spawn comic in the last three years, you'll have no idea how we arrived at this turning point.” Pretty much. In your reviewers opinion, it seems that McFarlane has either misjudged the character’s mythos by assuming readers are as familiar with Spawn’s origin as say Batman thus making an explanation here repetitive or that readers would be able to identify with Spawn as an archetype a priori or something. Whatever the reasoning, the whole thing ends up being confusing and seems rash.

Then, instead of giving an explanation of any kind, readers turn to an equally frustrating scene of an amnesiatic coma patient, whose name turns out to be Jim Downing, who develops a strange relationship with a nurse named Sara that is so disorientating that I am not even going to begin to try to explain it, waking up after God only knows how long. Comics Bulletin’s Martijn Form comment that “the story becomes a bit cliché: after so many years, a man comes out of a coma, and there are some mysterious people who are very interested in his awakening. Hmmm, seen that a hundred times,” actually understates it. Since giving up on Spawn ever returning to a half way decent serial years ago, the story has turned into a soap opera or a bad Steven Segal movie (redundant I know) where years of atrophy have no effect as Patient 47, as he is originally called, is up out of bed and kicking but almost immediately.

Even so, for most of the rest of the book, the plot focuses on Jim’s recovery in the hospital—not kidding—although who he is remains a mystery that this reviewer will more than likely never learn. Somewhere around Part Four, as the plot continues to go nowhere and we see Jim going from one hospital to the next while dealing with the same problems he was dealing with in Part One—as with the incredibly excruciating/pointless relaying of a phone exchange between Jim’s new doctor and his old doctor—we begin to wonder if McFarlane will ever leave St. Anthony’s Hospital behind.

When the narrative finally takes us away from this plotline things don’t get any better and story elements take up way too much time that never get explained and the whole thing gets so vague that when readers finally start getting glimpses of a new antihero that all of the waste that they have to put up with “doesn’t really make you care what’s going to happen next.” This results from the fact that all the secondary characters, who take up way too much ink and keep appearing out of nowhere, consistently add nothing to the plot and cause further problems with the pace of the book. Take the subplot of one Marc Rosen, for example, an irritating know-it-all rookie reporter who reminds you of every sadly ambitious high school class officer that was always just asking to get his teeth kicked in, we are introduced to for no apparent reason. This character, who we keep seeing ditching his girl friend for a scoop and going behind his editor’s back, it seems we are supposed to root for/empathize with but end up just wanting to see get canned for constantly being a whiney little tool.

Eventually, after the plot drags on painfully slow for multiple Spawn-less issues with only glimpses of Jim transforming into the new Hellspawn, readers who suffer to the end finally see the revamped protagonist. Even a favorable review from Rokk’s Comic Book Revolution admits: “By the 4th chapter I was near pulling my hair out for him to go Spawn already. We get glimpses in the prior 2 chapters but all we get are flashes of him as Spawn. It isn’t until the 5th chapter of Endgame that Spawn actually starts kicking ass.” With all that, uh, buildup and without any details on how or why Jim is chosen as the next Spawn, it is hard to actually care about where the story is going. 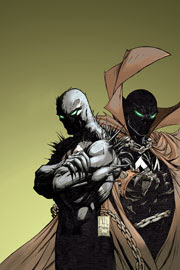 Making finally seeing Spawn on the last page of the collection even more anticlimactic is the fact that the reimagined Spawn looks exactly the same with only one noticeable change in replacing the semi-iconic red cape with spikes. That is not to diminish Whilce Portacio artwork that is for the most part the graphic novel’s one saving grace (which is at times spectacular and is overall perhaps the best art from Spawn’s 17-year-run) even though action moving through panels sometimes gets muddled which could just as easily be the writing, which does go along with recurring vagueness that so bewildering.

After this final, one would have to think, attempt to keep the Spawn series alive, as a former fanatic of the comic, this reviewer came back into the fold only to see that whatever was missed wasn’t worth knowing and what is to come will never be known. As with others who came back to Spawn after the promise of a return to quality that the series for years got away from, it’s defeating to reawaken long gone hope and excitement that ended up falling flat before it ever got off the ground. Stith from Comics Bulletin, writes of his return, that “with the lackluster ending” he will “be reluctant to carry on next month,” which seems to be what happened since he stopped reviewing at Issue #188. Unlike Stith, there is absolutely no question as to going back. Former Spawn fan or completely new to the series, don’t bother wasting your time. Like the Simmons incarnation of Spawn from early on in the series, the comic itself is as dead as a doornail and has been for a long time, although it doesn’t seem to know it.