Poor Grendel Had an Accident 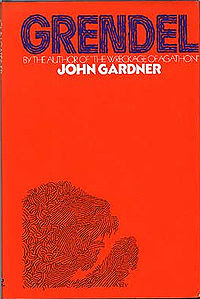 Up until reading Grendel, I only knew its writer, John Gardner, through his career suicidal book length essay On Moral Fiction so I thought of him as a pompous ass-hat whose attitude made him seem like a sanctimonious, elitist prick. After reading the essay, I was pretty much over Gardner and his accusatory ways.

So for years I ended up putting off reading this book told from the perspective of my all-time favorite monster, who I see as entropy incarnate, because in this nonfiction work he acted like a dick-head. On Moral Fiction thesis is namely that fiction should aspire to come off the page and wake the reader up to see what it is to be truly alive and believes this to be what fiction writers should aspire to. While this type of fiction is what I consider fiction at its best, Gardner’s tone was lets say off-putting and he also winds up taking shots at such contemporaries as Updike, Barth, DeLillo, and Pynchon, saying that they lack of morality, which again he believes the highest purpose of art.

Finally reading Grendel, which tells the monster’s side of the story immortalized by the anonymously written epic poem Beowulf through the form of a fictional autobiography, and Gardner has been totally redeemed. Composed in the ballpark of a millennia ago, Beowulf is where English literature begins as the oldest work scribed in my native tongue even though it was a much more primitive version of the language.[i] In the original Anglo-Saxon (a.k.a. Old English) poem, Grendel, a descendant of the biblical Kane from Genesis, is a cannibalistic maniac who loves to destroy him some mead halls that may be a monster or not and doesn’t seem to have the ability to think about or control his actions. He is chaos. Chaos that is ultimately quelled when the title hero rips off the arm of the “Destroyer of Mead Halls.”

Gardner takes this basic outline and revamps it for a contemporary, godless, existentially screwed, postmodern world dealing with the same questions that plague us all deep down. The main argument here is against contemporary thought that is so cynical in nature basically concluding that it is impossible to find any meaning in all of this when we think as Grendel does. But in this world where alienation and inner violence are so ingrained without any interpersonal connections to help us deal with these horrid feelings, what chance do any of us having at attaining true happiness, especially considering we can’t know anything with any certainty having everything constantly in question due to the banality of post-structuralist theory.

For Gardner, this doesn’t just ruin literature it ruins lives. This becomes clear when Grendel meets the Dragon, a personification of such dangerous thought. Here, Grendel is told how to make his own meaning when the Dragon says “You want the word. That's what you've come for. My advice is, don't ask! Do as I do! Seek out gold--but not my gold--and guard it!” (62). Upon hearing these words, Grendel then sets about his philosophical quest of how to live in a world that lacks reason and has no inherent meaning. Regularly taunting King Hrothgar’s subject Unferth for his heroic romantic notions, he wanders why, answering why not when he says, “How, if I know all this, you may ask, could I hound him—shatter him again and again, drive him deeper and deeper into woe? I have no answer, except perhaps this: why should I not?” (122). In this he resorts to selfishness which can only end in his eventual demise.

The book is very self-aware, as is the case with most postmodern fiction, with its deployment of that old popular tactic of the 1950s on and especially it seems in the 1970s, metafiction. Some find this tactic extremely irritating and is one of the reasons very few readers, and there are very few of us left these days, hate postmodern fiction. I, however, eat that shit up and for some reason love references to the writing process and art as craft. This method works especially well in Gardner’s novel since it shows how stories shape the lives of everyone, including the sardonic, skeptic Grendel who is “shaped” not only by the stories he hears of himself through the “lies” of the Shaper, even going so far as to believe them at times, but also, because the book is intertextual, by the story that limits him outside of the novel existing outside of his own experience. In essence, he is confined to the rules programmed so long ago in the epic poem, which amounts to predetermined fate that is utterly inescapable. Making him even more tragic is the fact that he sort of knows this which he hints at with statements like “only in a world where everything is patiently being lost can a priest stir men's hearts as a poet would by maintaining that nothing is in vain,” (159). So then, Grendel is in a double bind since his existence does follow a set order but even still it is one that he or any of us for that matter can find any meaning in, resembling an arbitrary cosmic joke that is always on us in the end and is in no way funny.

Grendel is so brilliant in so many ways that a dissertation can hardly even do it justice. It receives this reviewers highest praise and recommendations. It is required reading for anyone who takes literature seriously. The book is at times surprisingly hilarious. For example, when Grendel briefly kidnaps Hrothgar’s queen, Wealtheow, who he has sort of had a little crush on, flips her up and pulls “her naked legs apart as if to split her,” when he suddenly gets the idea to hold her over a fire to cook her “ugly holy,” (109) all while laughing like a maniac only to lose interest after getting self-conscious and realizing that to kill her would be just as pointless as to not kill her. He then leaves quasi-proud of himself for throwing everyone for a loop. Another example is when Grendel goes into the mead hall to eat people and ties a tablecloth around his neck to act as an ironic bib, which of course amuses him. Despite behavior like this accompanied by a pompous attitude, which is typical Gardner, the reader truly feels anguish for my all-time favorite monster as he warns those he is alienated from and has terrorized for years gathered around him, “Poor Grendel's had an accident. So may you all,” (174). This brilliant ending gets us because once it is over and we have put the book down, we realize its true and he is talking to us. 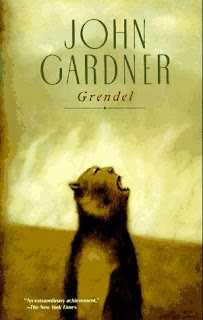 [i] Beowulf is a work that has been very near and dear to me. I have read it more than any other book for class and pleasure, I think I'm somewhere around my eighth reading, I have preferences with various translations (for example I like the Chickering version much more than the more popular Heaney-wulf text), and I am one of very few who is able to read the work in its original Anglo-Saxon, which I consider beautiful, having done extensive study in the language. Part of what I did in my course work for my Advanced Old English class was translate poems which more often than not ended up being from this epic tale.

you used the wrong spelling of Cain.
you also used "wanders" instead of "wonders".
i'm a senior in high school and i noticed this.
before you critique a book, make sure you understand the philosophy behind it. :)

Dr. Sandra/Sandy Hiortdahl did a wonderful dissertation on this work in comparison to Beowulf. As you said, it would be a true task to try and wrap novel up into an essay, but her 300+ pages of well written study is worth the time -if you care for such things.

Anonymous,
While you are correct, I suggest you learn to capitalize before you critique the mistakes of another.

My review was positive you idiots. Also, I'll be sure to have you look over my blog entries as well as my grad school essays for grammatical errors. Pricks.

oh shut up person below. you're a smart ass. he was just praising a novel not critiquing it. and I'm pretty sure using an emoticon is not proper grammar as well.