The Joker Kills It 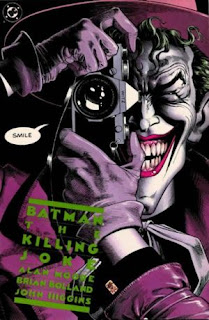 Watchmen author Alan Moore’s retelling of the Joker origin in his one shot, Batman: The Killing Joke, focuses on the psychological warfare Batman and the Joker have long been engaged in. While the short graphic novel proves in some ways groundbreaking and has enjoyed much influence in the Batman universe and continues to hold an incredible amount of pull with the various Batman films, the story ends up lacking in its character development and is riddled with clichés.

When revisioning how the Joker came to be Batman’s all-time greatest foe, Moore presents his pre-costumed villain days as those of a struggling stand-up comic who joins up with a band of thieves to provide for his wife and the child they are expecting. The crime the group undertakes, shown in flashbacks as the main narrative goes forward, consists of robbing a chemical company where he worked as an engineer before deciding to become Seinfeld. 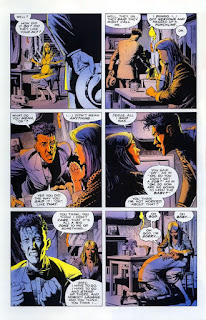 Things start going wrong on the night of the heist when police show up at the bar where the group makes their plans to inform the comedian that his wife has died in an ironic, “Gift of the Magi”-ish accident involving an electric baby devise. Obviously in no condition to perform his role, which requires him to dress in the mask of a villain known as “Red Hood”, instead of letting him go back to his empty apartment to cry himself to sleep or de-map himself or whatever, the two thugs he sits with strong-arm him into going through with it. 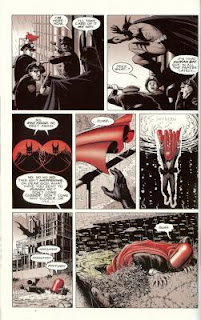 When they end up in the plant, the cops show up immediately and they finger the comic in the red getup as the criminal mastermind Red Hood in hopes of Gotham’s finest focusing their efforts on him. Making things worse, Batman shows up and scares the holy bejesus out of the comedian, forcing him to make the ill-advised decision of jumping into a vat of toxic waste to swim to freedom. After his swim, he drags himself to shore only to discover that the poison has forever dyed his hair green, bleached his skin, and given him a constant Cool-Aid mustache. This telling of the Joker’s myth was clearly a major influence for Tim Burton’s 1989 Batman film where in following a shootout with police at a chemical factory, Batman busts in which eventually causes Jack Nicholson’s character to fall into a large vat of some sort of acid and then emerge from a near by reservoir with stained hair and skin.

This is not anyone’s idea of a good day and apparently the events of this really crappy day caused the comedian to go insane and become the Joker. His scheme in Moore’s work is to drive Commissioner Gordon as crazy as he is by giving him his own personalized “one bad day.” After shooting and paralyzing his daughter, the Joker takes Gordon to his newly acquired carnival, strips him naked and taunts his to force him into madness. 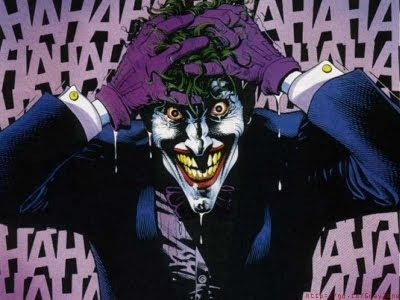 This series of events constitutes some of the book’s best work. For instance, the Joker’s “Average Man” speech is particularly chilling, boasting the following in carnie fashion:

Ladies and gentlemen! You’ve read about it in the newspapers! Now shudder as you observe before your very eyes, that most rare and tragic of nature’s mistakes! I give you…THE AVERAGE MAN! Physically unremarkable, it has instead a deformed set of values. Notice the hideously bloated sense of humanity’s importance. The clubfooted social conscience and the withered optimism. It’s certainly not for the squeamish is it? Most repulsive of all are its frail and useless notions of order and sanity. If too much weight is placed upon them…they snap. How does it live, I hear you ask? How does this poor, pathetic specimen survive in today’s harsh and irrational world? The sad answer is ‘Not very well.’ Faced with the inescapable fact that human existence is mad, random and pointless, one in eight of them crack up and go stark slavering buggo! Who can blame them in a world as psychotic as this…any other response would be Crazy!

However, before Gordon completely nuts, Batman arrives to save, hurm, the day. These are issues director Christopher Nolan took up in his exquisite film The Dark Knight. The words above are echoed in the film when the Joker reveals his master scheme to prove that deep down, anyone can be as ugly as him when he states “I took Gotham's white knight and I brought him down to our level. It wasn't hard. You see, madness, as you know, is like gravity. All it takes is a little push!”

Even though the book has influenced the two most successful Batman films of all time—with Burton’s telling and Nolan’s transposing the Joker’s scheme of attempting to drive an upstanding citizen insane as well as themes such as the Joker as an unreliable narrator who prefers “multiple choice” when it comes to truth, the blurring of lines between Batman and his nemesis, and their inevitable mutual distruction—there are still a few problems with the work, namely it works too deeply in the archetype which doesn’t allow it address its themes in a powerful way. As Andy Shaw of Grovel points out, “the necessity of playing by the unwritten rules of such a tale round off its spiky edges… Without giving too much away, the ending is a little more traditional than the promise (or at best, ambiguous enough to leave it open to interpretation) and, as a result, a little disappointing… it’s incapable of squeezing out of its own shackles.”