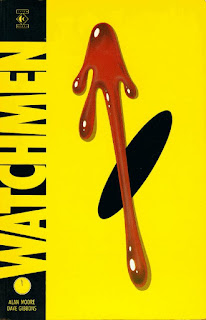 Reading Alan Moore’s Watchmen for the second time in the last couple of months, I have to say it got better with the second reading—and I still think that I can become Rorschach if I wanted to—but even more than that, I have grown to love the movie—dare I say—at least as much as I do the graphic novel.

My initial reaction was annoyance that they changed the ending to a seemingly Dr. Manhattan meltdown instead of the awesomeness that would have been an extraterrestrial creature who just showed up on our planet and who’s like brain exploded and also by the fact that they 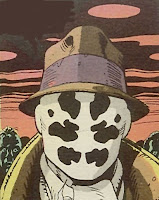 turned Rorschach into a quasi-superhero instead of the bum he really was.  For example, I was really pissed when they needed the whole police force to take down the ink-blot-faced badass instead of him just twisting his ankle after failing to clear a garbage can.  I was (and sort of still am) irritated by that development.

But what can you do?  The movie was still awesome in so many ways and they got some of the best things about the comic book right to a T. 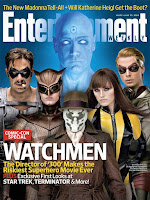 Weeeellll, after seeing the 3 hour and six minute DC version, I was ready to watch another 2 hours of Watchmen.  And they could do this—and still may—too.

For starters, I want to see “The Black Freighter” stuff spliced into the film.  This was probably the thing I liked the most as far as the asides go from the graphic novel, and this was made into a straight to DVD animated short that came out just after the movie did in theaters.  It wouldn’t be too hard to just throw it in, especially since the newspaper vendor was actually in the movie and all.  Even though, as far as I can tell, the writer of the story within the story was cut completely, it still wouldn’t be shit to put this tale of peg-leg irony into the film.

Another thing I was sort of peeved about was the fact that they downplayed Nite Owl’s impotency issues.  In short, he couldn’t get it up unless he was kicking ass.  In the film, this was not all that explicit—but then again, the character was cast (greatly so) a little young.  So I am not too upset by this one but still maybe a little.

But I guess I can be a purest when it comes to adapting novels on the big screen.  So, on that note, one thing I really dug and got into after another reading and several more viewings, was the whole Comedian as a crazed Vietnam Vet thing, which I didn’t immediately pick up on.

At first the Comedian seemed liked a crazed asshole, but then, upon further examination, you become the first Silk Spectre forgiving his past deeds and loving the cynical bastard.

And so, after reading Watchmen and Frank Miller’s Batman: The Dark Knight Returns, which was published the same year, it is clear that these two pieces end up looking like the appearances of Dr. Manhattan and Ozymandias—a.k.a. Adrian Veidt—as seen when they appeared in the novel Watchmen.  We are left to look on in awe as the old is replaced with the new and everything has changed but in our shock we can’t say how.  But we know.  God help us all.  We know.

I must say I was quite struck by the following: "We are left to look on in awe as the old is replaced with the new and everything has changed but in our shock we can’t say how. But we know. God help us all. We know."

That is exactly how I felt after reading Frank Miller's Dark Knight, and it works perfectly for Watchmen as well. Sometimes the changes are inexplicable from a vocal/communicative standpoint, but they fester in the brain quite obviously.

I'm a truth purist when it comes to book to film adaptations. The details don't have to transfer perfectly or even at all, as long as the essence of the story remains. I felt good about Watchmen in this sense, but like you, I wanted more.

I realize this is six years late, but I wanted to say that I've come to like the ending of the film more than the graphic novel. It simply seems to fit the world on a much truer level than a giant, genetically-engineered psychic squid, with the added bonus of doing it to more than one city.

Honestly, given the state of the world in the graphic novel, you'd think that the USSR would view an attack on NYC (plus the disappearance of Doc Manhattan) as an opportunity to grow more bold, maybe even invade Europe. What's America going to do at that point?

But fear of Jon (whom humanity already fears), and the tragedy occurring globally, would be plenty to promote world peace. After all, humanity has always feared its gods.