This here is My Boomstick, Mr. President 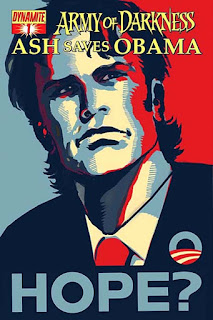 Ash is back and he’s a liberal. Army of Darkness: Ash Saves Obama, the first in a four part mini-series, will surprise many as a quality comic.

Set at a Detroit comic book convention, the character that made Bruce “Jack of all Roles” Campbell famous once again finds himself face-to-face with the Deadites. Think of it as Dawn of the Dorks. Anyone who has seen Evil Dead, Evil Dead II, or the Army of Darkness will be familiar with the storyline—someone reads aloud from the Necronomicon (i.e. the Book of the Dead) and unknowingly unleashes the demonic spirit that turns unwitting youths into the walking dead—even the book itself says as much when the comic book store guy says “whenever someone stumbles across a successful formula, you always have those who try to duplicate it.”

However, this comic differs from the films and previous Army of Darkness comics in that it stars Barrack Obama who has stumbled across Ash’s long time foes. Now Ash must defeat the Deadites and bail out the President so he can save Detroit’s auto industry.

The book is completely self-referential, constantly referring to events and quotes from the movies, and could be classified as meta-fiction with its allusions to slew of comics that have featured Obama related plots.

The Elliott Serrano’s (Army of Darkness/Xena) quirky story works for laughs but not quite as many as the films and Ariel Padilla (Red Sonja) isn’t too bad either. Even more impressive than Padilla’s illustration work are the covers by Todd Nauck (Amazing Spider-Man) and Lucio Parrillo, whose design mimics the iconic Obama “Hope” poster featuring the likeness of Ash supplanted in presidential pose with “Hope?” written below.

All in all a decent work that will appeal to Bruce Campbell/Army of Darkness fanboys and anyone who likes an off the wall zombie comic. Look for Issue #2 set for release next month.

I'm gonna check it out.
Thanks!