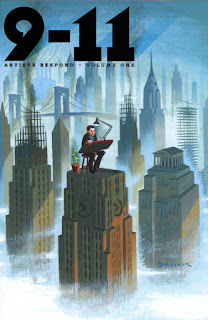 Approaching the eighth anniversary of the terrorist attacks of September 11th, reading the first volume of 9-11: Artists Respond feels a little weird. This comic was published in January 2002 but most of the work there in came just after the Horror and as such is for the most part a lot of shock and holy shit type reactions mixed with all that gushy American patriotism that pretty much everybody experienced in those early months. For this reason, I have ended up thinking a lot about my own life around that time and how strange it all was. It was the strangest period of my life, and not just because of 9/11 but these are things I will get into momentarily since, as usual, I am quasi making this about myself instead of the book I am reviewing.

First of all, as mentioned, the majority of the pieces found in the book are just full of gooey American goodness. For example, Marc Rosenthal’s strip asserts that the terrorists didn’t change the world on Sept. 11, 2001, no the world changed when “in the end, the criminal terrorists lost what popular support they had, and became increasingly isolated as the world saw the clear moral choice,” (p. 174). Hmm. With hindsight we see that that is a load of shit that we all believed back then. Iraq, “the game changer,” blew that opportunity to all hell and once again we are fucked. More than ever now probably. And in 20 years, when the orphaned Iraqi children are old enough to get their revenge, then “Holy Terror, Batman!”

Looking back on this time, I remember watching Bush’s big speech on the 20th and thinking “Wow, I can’t believe I am actually agreeing with things Bush is saying.” That didn’t last long however. The next day, when I went home for the first time after starting my first year of college, my dad, who like me voted for Nader in 2000, expressed his disbelief at the president’s audacity. He also correctly predicted we would go to war with Iraq because of this. I was confused, “What do you mean go to war with Iraq? That doesn’t even make any sense. Why would we go to war with Iraq?” 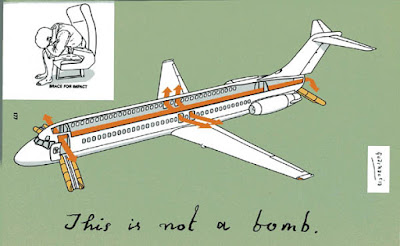 “Just watch,” he told me. “He snuck Iraq into that speech, didn’t he? Just wait and see.”

The majority of the reactions featured here, however, come even before that infamous time in the weeks following the Horror. That is, most of the strips are initial reactions that record the shock and terror of that single day in history. For example, one Mark Crilley’s reaction focused on that gorgeous day, a day when I talked with people outside, not many days are like that in an Ohio fall where I went to school, when he writes out one of my thoughts from that day, which was “What a beautiful… horrible day,” (181). On that beautiful/horrible day, I myself was sort of going through a meltdown of my own. Just after I watched the second tower fall, I had to trek over to the athletic complex for an 11 a.m. meeting with the football team, after which I was so screwed up I tried to quit but the coach basically wouldn’t let me. I was clearly out of my mind.

But then again, I still am. Not that that has anything to do with 9/11 or anything, just thought I would share.

So, anyway, there were two types of reactions I really liked: (1) the cynical, nihilistic viewpoint that greatly resembles my own, and (2) the over-grown kid who hasn’t progressed with his/her peers into adulthood—which I can also identify with since I am basically just an overgrown kid myself.

In regards to the overgrown kid theme, one by an artist named Scott Morse stood out. In his story titled “3 Second Impact,” we see a goofy, awkward yet endearing little kid, with a Stewie Griffin lemon-head, coming out of his little shell and doing superhero moves throughout his living room. Halfway through his routine though, we are allowed to see the fully grown Morse, sitting and watching his TV on the day of horror, saying that “I still act ten half the time,” (23). What an excellent image here that nicely captures the way I for one felt at the time—wanting to go out there and do something only having no idea what the hell to do and ending up just reading some comfort material by himself. 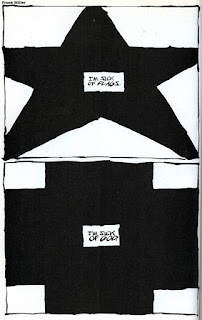 Of the latter grouping, standing in a class of darkness all by himself, go figure, is Frank Miller. Who in minimalist style among black and white images of a star, a cross, and finally a negative of a tower’s skeleton, writes “I’m sick of flags. I’m sick of God. I’ve seen the power of faith,” (64-65). This bleak little ditty here is sort of what you would have to expect from Miller. But even though it is sort of twisted and nihilistic and self-absorbed and what have you, it is one of my favorite pieces in the collection, for it is understated and rightly depicts the shit I for one remember going through at the time. 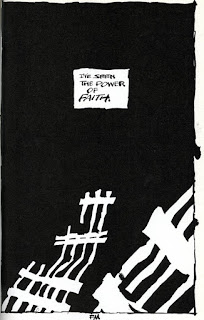 And then there is Alan Moore’s piece, the final and longest in the collection., in which he compares al-Qaeda to the typical villain of the comic book genre. In the strip, titled “This is Information,” Moore claims writing super-villains is “embarrassingly easy” (189). With that in mind, in his genius, long before anyone knew anything about the Muslim world, he tells us that only for the truly evil—i.e. those in comic books—“no motive is required,” (190). But there is more to them than that and to defeat them or what have you you have to look at like the heroes in Watchmen or something—no one is all good nor is anyone all evil. Things aren’t always so simple as he eloquently states: “we are all supposedly with the crusaders or the terrorists.” But how can we even make that decision, especially then before anything was known. Even now, after all the shit that has hit the fan, and to quote a ridiculous movie, The Big Lebowski, for a super serious subject, just using “the parlance of our times, man,” so to speak “the goddamn plane has crashed into the mountain,” it seems even harder to choose after all of the evil the crusading has generated all for nothing.

Its depressing looking back over this and seeing all the missed opportunities. Christ, how things got so fucked and the Right used it all to take control. Jesus, fuck. But then again, Moore left it on the note that we all felt and what was really important and what stuck and what really made us feel and what mattered. We weren’t with the crusaders. We weren’t with the terrorists. We were with you. Whoever you are.

Great article! Very interesting. I have never heard of 9/11 comics before reading this. But, again, I do live in Canada.