Sports Documentary: The Games of the V Olympiad Stockholm, 1912 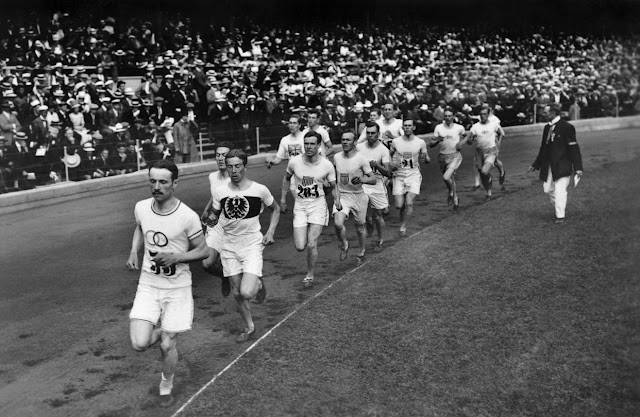 Criterion Channel has all the official Olympic Game documentaries going back over 100 years. This is my new thing. I have seen exactly one of these prior. Leni Riefenstahl's Olympia. You know her. She did Triumph of the Will. Considered the great Nazi prapagandist. Technically that was the first official Olympic documentary. But giving this a viddy since it's available and seemed interesting. But it's kind of boring. Just watching people do the same thing, over and over, one after another, with a boring ass opening and closing ceremony.

Not exactly confident I could have won a gold medal if I were transported back in time to 1912, but compared to today's standards, these guys were like high school sectional athletes. The hurdlers were especially trash. Stuff happened like tripping and completely wiping out and still getting up to win the race to qualify for the finals. A guy sets the world record at 15.5 seconds for the 110m after knocking down like half the hurdles. I ran a 16 second in 10th grade and wasn't even the best on my team. I didn't even qualify for the finals in my sectional. The kid who won the sectional would have shattered this world record by over a full second. Men's gymnastics was a complete fucking joke as well. It has to be seen to be believed. It's more what I'd call a warmup than like a competition.

Speaking of, there were a lot of sports that I know but had a hard time figuring out what the point of them were back then. Diving, for example, appears to be more like the long jump with a dive at the end. No flips or turns. Just swanning 30ft. That shit was done into a lake by the way.

Picture is restored and looks amazing. I've read like 10 or so times why old timey, silent era film looks so good. Has to do with the size of the film. Can't really explain or understand it though. Just know it looks great. 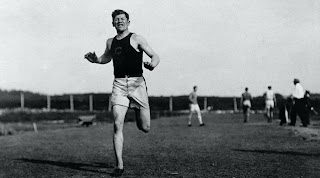 Some things of note. A dude dies from exhaustion during the marathon, which is fucked. Researching this race, found that another guy disappeared which is just insane. One Shizo Kanakuri, weak from the long journey from Japan, and having problems with the local food, lost consciousness midway through the race. He was found and cared for by a farming family. Being embarrassed from his "`failure" he silently returned to Japan without notifying race officials. Swedish authorities considered him missing for 50 years before discovering that he was living in Japan and had competed in subsequent Olympic marathons.

Also get to see Jim Thorpe after winning a pair of gold medals. He wins the pentathlon and the decathlon. Looked him up. That dude looks like a contemporary athlete. It's like a bunch of average dudes off the street and then this dude who looks like a damn super hero. Looks amazingly like John Cena. Dude is a stud. Wish there was more video of him in the film. 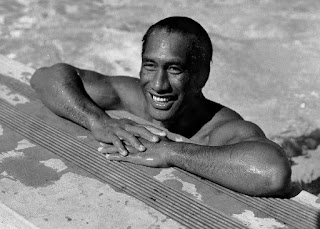 One more guy of note that I'd never heard of that was super bad ass. One Duke Kahanamoku, born in 1890 under the Kingdom of Hawaii, just before the overthrow. A native Hawaii swimmer, he wins gold in the 100-meter freestyle. Won a total of five medals over three Olympics. The other two were in 1920 and 1924. Incredibly, was an alternate for the U.S. waterpolo team for the 1932 games.

Dude's life was incredible. Was part of a landmark Supreme Court case resulting from an arrest he made where a civilian was tried for shoplifting in military court. It's complicated and he just made the arrest. Was an actor, the Sherriff of Honolulu, a Freemason, and a professional beach volleyball player. He basically single handedly popularized surfing in the early part of the century when he saved eight fishermen after a boat had capsized, killing most of the people onboard. He was able to drag the men to safety and get back to wreckage quickly with the use of his board. After that, lifeguards used surfboards as part of their standard rescue equipment.

Legacy lives on too. Has statues all over the place in Hawaii, is in both the surfing and swimming hall of fames, had a comemorative stamp with his likeness on it issued in the 2000s, and was the subject of a Google Doodle a few years ago. You can read a little about him in the New York Times here. Dude is a total MVP. He knew how to party.