Satanic Panic is the worst movie of all time 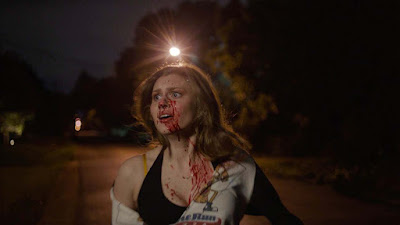 Satanic Panic. Are you by any chance, a virgin? That's a very personal question. She's a virgin... I should stop drinking. Judi Ross: You really wanna face this shit sober? Yeah, not really. Comedy horror that is neither funny nor scary. That virgin line would have been okay if it weren't already done in What We Do in the Shadows. This was sort of a chore to get through. Though the main girl is alright.

Gist of this shit is that a broke pizza chick goes to a rich neighborhood outside of their delivery area in hopes of getting a decent tip. She gets no tip. Gets pissed. Does a bit of B&E. Gets volunteered for sacrifice by an order of Satanists who need a virgin to birth a demon. You know, shenanigans. But shit gets all fucked up. 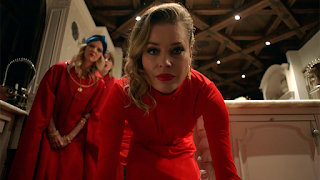 Stars you'll recognize include Rebecca Romijn who looks incredibly different with dark hair (still a very pretty woman, just not herself) and Jerry O'Connell who just plays sleazy dick-bags these days (total sleazy dick-bag who offers to bone the virgin so that, you know, she isn't a virgin). Others you probably won't: AJ Bowen who is in a shit ton of mumblecore flicks like House of the Devil, The Sacrament, and You're Next; Hayley Griffith who plays the pretty virgin girl that almost moved me to tears; Ruby Modine who was the killer in Happy Death Day; and Arden Myrin whom I swore I recognized from something before deciding it was Isla Fisher I was thinking of (it's this face she makes).

Giving the win to this Hayley Griffith chick for her monologue about her boyfriend with cancer who can't really have sex, hence her virginity. Surprising amount of feels there. Wasn't expecting that. You get it, girl.