Downtown 81 is the okayest movie of all time 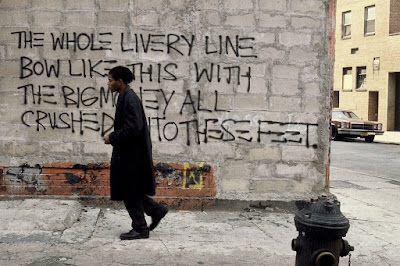 Downtown 81. I'm an artist. When you tell people that they usually say, 'what's your medium?' I usually say, 'extra large.' It held my attention, but I was disappointed that it did when it was over. Nothing really happens other than a bunch of people play music and Jean-Michel Basquiat walks around early 80s New York and hangs out with interesting people as he was want to do.

There was a point in this movie where I thought this was the worst soundtrack of any movie ever. This is likely a controversial statement, as I imagine there are people out there that think it is the best. A snapshot of post-punk era Manhattan. Yeah, I hear ya. I don't really know anything about any of that. Blondie, I know her. Early in the film there is this band who's lead singer/guitarist I wanted to stab. The band, prep punk singer/guitarist who may have never sung or played guitar before this performace, a pretty Japanese woman who was getting it on the drums that spoke no English, and a bassist that was speaking Spanish and went between playing his instrument and mashing it at random. They weren't playing bad music with charm. It was half good music with experimentally bad music playing on top of it. I fucking hate that shit. Band called James White and the Blacks. Sort of the same shit. The Blacks, I dug. James White, taking a sax into the crowd and playing in people's faces, can go fuck himself too. But there were some performances I really dug. Kid Creole and the Coconuts turned this whole ship around. Like the ska B-52s. Check out their shit. For real, it's dope.

The gist of the movie is Jean-Michel Basquiat gets out of the hospital. Not told what for. Gets evicted. Meets a chick. Falls in love. Looks around for her whilst trying to sell a painting. Band he's in gets robbed. Goes to various clubs. Sees the chick he was in love with and she is bouncing around said clubs, maybe ignoring him as he follows her from a distance. She doesn't live up to his expectations so he blows her off even though he needs a place to stay, with him being newly homeless and all. But he walks around an ally, sees a homeless and gross Debbie Harry. She tells him she is a fairy godmother and will grant all his wishes if he makes out with her. She is done up like a homeless leper so he isn't super into it but does. She turns into Blondie and gives him a suitcase full of money. The fucking end. Fab 5 Freddy also has a cameo. Fab Five Freddy told me everybody's fly. DJ spinning I said 'My My.'

Jean-Michel Basquiat wins the movie. Hell of an actor, that guy. Can also paint. Not that great of a drawer or poet though.