Madman is the okayest movie of all time 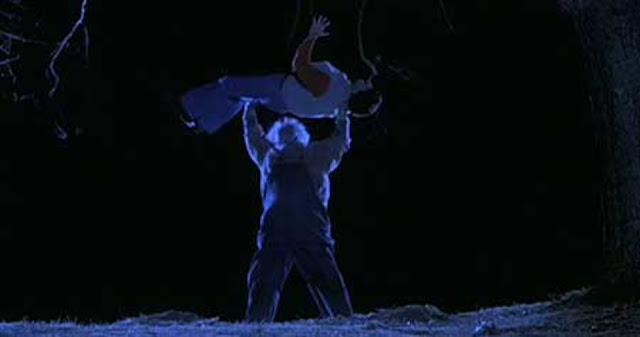 Madman. "You didn't let me finish," the survivor girl says to a hairy-assed dude giving her underwater cunnilingus when he comes up for air. "Gotta breath, baby, gotta breath... sorry." Nothing like watching a supernaturally ugly dude killing camp counselors for doing camp shit on a fall Saturday night. At the same time, if you've seen one, you've seen them all. This doesn't exactly add anything to the genre, if you know what I mean. Plus, the copy I watched, on a legitimate streaming service, mind you, occasionally had these weird purple lines going down it that were pretty concerning as far as my television goes but then I eventually realized it was just something with this flick. But it is serviceable. As I thought I had stated before, but maybe haven't, I'm no longer binary. I can deal with three ratings. Hence this is, like, the most okayest movie of all time.

Gist of the movie is that a camp pisses off a giant, monstrous killer who then does a shitload of killing. Some brutally with an axe. Some brutally in more creative/insane ways. More on that later. This is one of those they-tell-a-campfire-tale-that-ends-up-being-real slashers. You aren't going to recognize a single person in this except for maybe Gaylen Ross who was the female lead in Dawn of the Dead (the original) and had a minor part in Creepshow. 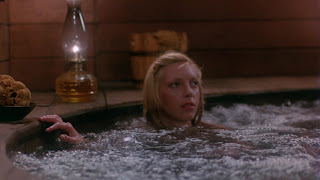 Lot of shit that doesn't really make any fucking sense but just roll with it. Stuff like a chick who goes out on a canoe to play a record for no reason, a strange precoital hot tub courting contra dancing, or this dude throwing a rock from the woods with noodle-armed bullshit of a hurle. I mean, they are in the woods and this dipshit couldn't have flung this thing 15 feet. But no, this breaks the window of this house that had to be miles away where they are having this fire is not in the wide shot when they show the house. But yeah, ignore that shit.

Loosely based on the Cropsey Staton Island legend. A mental patient that was released from Willowbrook State--the one that Geraldo Rivera made a name for himself when covering the horrific conditions patients were subjected to, it is really fucking sad--that takes and murders kids. For a solid explanation check out the Cropsey documentary that also touches on a real series of Staton Island child murders that people associated with the legend. Insanely, this wasn't the only Cropsey movie being shot in 1980. Once the filmmakers heard this they downplayed the Cropsey stuff and changed the name to Madman Mars. The Burning was the other movie. Might be watching that soonish.

The only attractive chick who has sort of an afro. The killer keeps going after her too, boy, almost getting her as she slides her way up a hill and drives around looking for people. He eventually gets her in the most infamous scene of the movie, involving a checking under the hood decapitation while she is jiggling the wires or whatever. One of the other girls, yeesh. Plus she takes everything out of the fridge and hides in it, just throwing all the shit that was in there on the floor right next to where she was hiding. This Bigfoot/human hybrid, though it doesn't appear he has a working refrigerator in the dilapidated home he (I assume) squats in, more of a icebox type, probably thought something like, "what the hell is all this shit doing on floor? Oh, yeah, some asshole is hiding in there. I paused the movie and typed this shit up, I'm watching the Joe Bob Briggs: The Last Drive-In on Shudder version, and Joe Bob made the same comment. Makes a lot of the same points that I do here. Great when our minds think alike since he is my favorite and all. But it makes me look like I'm plagiarizing which I am very much against.

I like how at the end, when most of the survivors (including the five kids at the camp) are in this ready to leave, they see Madman carrying someone to his trophy room. The chick is like, "someone should do something!" and the dude on the bus doesn't say shit and lets her go off to have a showdown with Marz while dude drives off to safety. What does she get for her effort? Marz bitch slaps her face off and gets thrown on a meathook. This is bullshit. She does burn his place down and stabs him from the meathook, which is impressive. I'd say that dude who drove the bus out of fucking dodge won the movie as there really was no clear winner.