Chinatown is the greatest movie ever made 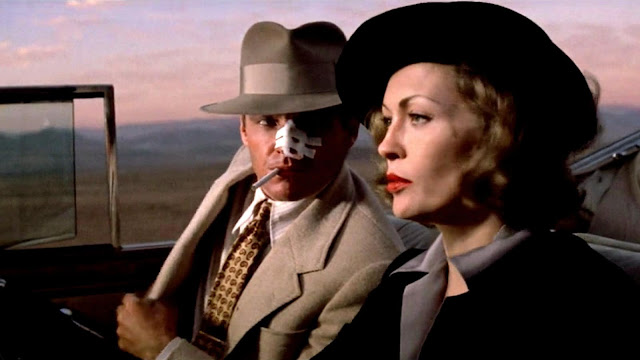 Chinatown. Forget it, Jake. It's Chinatown. She's my sister AND my daughter! Fuu-uuuck this movie. I mean, solid hard-boiled detective movie. That little freak Roman Polanski did alright. His first movie after Charles Manson's crew killed his preggo wife, Sharon Tate. Couldn't really imagine a darker ending to a movie. Obvious that Polanski, who is a fucked up little man, will get into a bit, I'm sure, was going through some shit when making this, the movie with the most off topic title of all time.

Rotten Tomato Consensus: As bruised and cynical as the decade that produced it, this noir classic benefits from Robert Towne's brilliant screenplay, director Roman Polanski's steady hand, and wonderful performances from Jack Nicholson and Faye Dunaway.

Gist of the movie. Classic neo-noir mystery where Jack Nicholson's character, J. J. "Jake" Gittes, is paid by one Evelyn Mulwray to spy on her husband, Hollis, whom she believes is cheating on her. Hollis, it turns out, is the chief engineer for the Los Angeles Department of Water and Power and is publicly feuding with his former business partner and father in-law, Noah Cross, for Hollis's assertion that the creating a new reservoir would be unsafe. Gittes then photographs Hollis with a young woman who it is assumed he is having an affair with. After the pictures turn up on the front page of the paper, Hollis Mulwray ends up dead by apparent suicide. But all this turns out to be bullshit when the real Mrs. Mulwray, played by Faye Dunaway, shows up and Gittes starts investigating the whole thing as a murder. 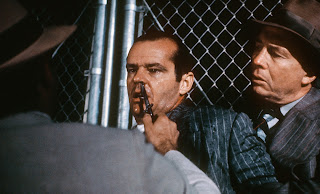 Second Robert Evans/Paramount Pictures movie directed by Polanski. Written by Robert Towne, he based the screenplay on the California Water Wars which is some real interesting shit. Stars include Nicholson and Dunaway. Also John Hillerman who was Higgins in Magnum P.I., James Hong who was the standard Asian guy in movies for a while (you may remember him as Lo Pan from Big Trouble in Little China or the "so cold" guy in Blade Runner), Polanski as the guy who cuts Gittes's nose, and Burt Young who was Paulie in the Rocky movies.


Some bullet points... Burt Young's character is a wife beating asshole that really didn't age well coming from a director like Polanski who bragged about cheating on his beautiful, preggers wife before she was murdered by the Manson Family, said no woman was his intellectual equal, and had sex with multiple children which ultimately forced him to flee the country. In this we see Young getting pictures from Gittes of his wife boning some other guy. At the end, Gittes goes to Young's and the wife answers the door with black eyes. It is treated like a joke. Can just imagine Polanski being like, "ah, she'll have black eyes and be cooking dinner, it'll be funny!" But, yeah, that chick is a really shitty place with no way out. Instead of this guy she was at least physically into, maybe emotionally or whatever, now she just gets beat at home, forced to cook this prick's dinner and what not. Not hard to imagine why she went outside the marriage with him treating her as such.

Nice little Seabiscuit Easter egg at the beginning of the movie. Gittes is reading the LA Times and on the cover of the newspaper it talks about the famed horse written about by Kenyon alum Laura Hillenbrand. 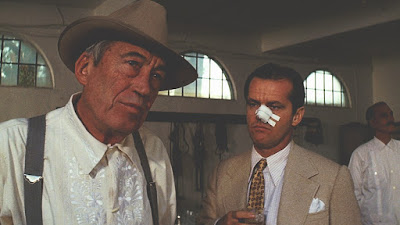 Director John Huston is solid and creepy as shit as Cross. I may like him as much as an actor as I like him as a director. Currently reading his autobiography, An Open Book. Him and Brad Pitt are my current man crushes. Though his part in this is truly fucked and disturbing. Doesn't get any better than when Nicholson and him have their little talk when we first see the Cross character. There Cross and Gittes talk thus:


Cross: You've got a nasty reputation, Mr. Gits. I like that.
Gittes: Thanks.
Cross: If you were a bank president, that would be one thing. But in your business it's admirable and it's good advertising.
Gittes: It doesn't hurt.
Cross: It's, um, why you attracted a client like my daughter.
Gittes: Probably.
Cross: But I'm surprised you're still working for her - unless she's suddenly come up with another husband.
Gittes: No. She happens to think the last one was murdered.
Cross: Umm, how'd she get that idea?
Gittes: I think I gave it to her.
...
Cross: Gittes. You're dealing with a disturbed woman who's just lost her husband. I don't want her taken advantage of. Sit down.
Gittes: What for?
Cross: You may think you know what you're dealing with, but believe me, you don't 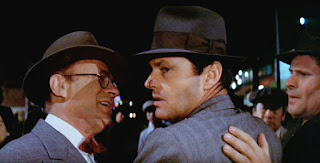 That is some player shit from Huston. Have to think he got some enjoyment out of saying all of this to Nicholson who was, at the time, dating his daughter, the lovely Angelica Huston. It's probably my favorite scene in the movie. Plus he is onto something there as Gittes, in my opinion, is sort of a shitty detective. Throughout the movie there are like five times where Gittes more or less proclaims he has figured it all out and was wrong as fuck. Dude thinks he knows everything. He doesn't know shit. Also, full of shit. Says some shit about him drawing the line at extortion. Bullshit. He bones a client for fuck's sake. And the weird I think racist joke he tells that is not funny and I'm not sure I really get, is fucking stupid and ill timed. But there is no universe where Nicholson's portrayal of the character doesn't win this movie.

Was inspired to watch this flick again after 20 years after watching Once Upon a Time In... Hollywood. Tried watching it imagining the Rick Dalton character in the Gittes role as I assume in that universe, Dalton is staring in Polanski flicks instead of Nicholson. Maybe with him instead, so like one of the other detectives or something. But I could totes see DiCaprio as Dalton as Gittes. Lot going on there mentally but I see it.

So, now, that ending, spoiler, is fucking dark. Fuck that shit. Female watching companion did not like. Dunaway gets shot in the eye by the cops when trying to flee her rapist father who is trying to take back his daughter/granddaughter. Once the car stops and the girl is screaming and Huston shields her eyes in about as creepy of a way as possible, it looks as though the girl is going to live with her rich daddy-granddaddy. This disgusting, gross murdering perv. I'm sure that is going to be fucking great. Must have blocked that shit. Left a horrible taste in my mouth. Had to start a Pixar movie as a pick me up.

It's the WORST greatest movie ever made. That ending...