Mandy is the greatest movie of all time

Mandy. Comes out exclusively on Shudder tomorrow. Word on the street that this little horror flick is one of the best of the year... "But it stars Nicholas Cage," you say. Yep. And he fucking kills in this trippy ass movie that is fucking beautifully shot. If, you know, it weren't so uncomfortable, it'd be a hell of a movie to trip through. But it's fuck and a recipe for a night, that's for fucking sure. Bad acid also factors into the plot. So yeah. Don't trip to this. But it's beautiful in a way that makes you want to. I was glad that I did for Annihilation. Really glad I didn't through this, if that tells you anything. This is a much darker vibe. However, it is indeed great. Greatest of all time as a matter of fact. 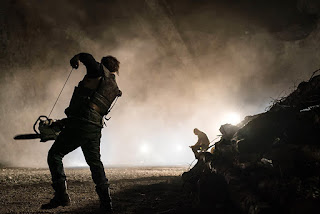 Rotten Tomatoes Consensus: Mandy's gonzo violence is fueled by a gripping performance by Nicolas Cage -- and anchored with palpable emotion conveyed between his volcanic outbursts.

Pros: Fucking gorgeous. Cage is amazing. Performances in general are really something. Love a good, trippy acid movie. Makes you feel like you've been drugged at times. Chainsaw-on-chainsaw action is pretty much always amazing.

Cons: Talk about violence towards animals in a little too much detail for my tastes. Not much struggle for Cage's character. Once he gets going he easily massacres everyone. Cuts through them like "a fat kid through cake," as one character says. 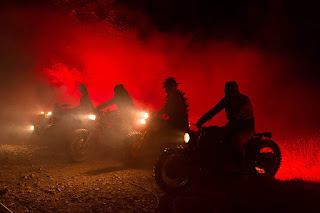 Gist of it is Nicholas Cage, who plays the lead Red Miller, and his special lady friend Mandy Bloom are just trying to live out their days peacefully in 1983 in the rural Pacific Northwest, just tripping and looking at the stars and shit (sounds nice, right? this is basically how I live now), when a cult leader spies the girlfriend and decides to take her with the help of his followers and a group of whacked-out bikers that look an awful lot like Cenobites. After the Cenobites subdue the couple, the cult then force feed Mandy an LSD-like substance with darker implications while the leader tries to talk her into joining their pathetic little group. He inevitably exposes himself and she laughs uncontrollably. This results in the group immolating her while Cage watches in horror. Once he gets loose, it is fucking on and dude takes some of the bad acid and goes fucking off, killing the shit out of everyone in what can only be called a fucking rampage. It is lit AF. 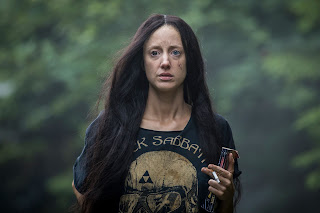 The movie, which came out earlier this year, was directed by one Panos Cosmatos. His only other credit as director is a flick called Beyond the Black Rainbow which is un-fucking-believable. In addition to Cage, the film stars Andrea Riseborough as Mandy, Linus Roache who I vaguely recognize I think from his role of Thomas Wayne in Batman Begins is the cult leader, Richard Brake as The Chemist who is cool and totally whacked, Bill Duke who you'll recognize as the black dude from Predator that is not Carl Weathers plays Cage's buddy in one of the only speaking roles outside of the cult, Cage, Mandy, or the Chemist, and Ned Dennehy, Olwen Fouéré, and Line Pillet play various cult member (basically the right-hand man, the old/annoying one whom we find out is the most sensual lover that the cult leader has ever experienced, and the pretty one, respectively).

Lots of pretty sick kills in this. I mean, there is a chainsaw-on-chainsaw fight that ends with a guy falling on a chainsaw that doesn't even break the top three. The best though, in my opinion, comes early in the rampage. This is like the second Cenobite that he kills. They are fighting hand-to-hand and what not when Cage gets the upper hand. He then uses the opportunity to Bruce Lee him, that is break his neck kung fu style. It isn't the kill that I was impressed with as much as what he does after which is an insane amount of cocaine. This, obviously, is the correct response to such a situation. He also takes a little hit of the bad acid that turned these folks into Cenobites or whatever which was not recommended. Late in the movie we see he is likely headed down that Cenobite road. No coming back from that if you know what I mean. 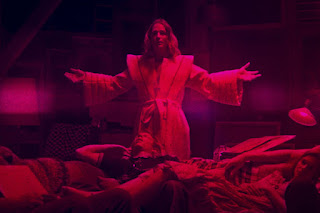 Favorite scene is from when Cage kills the old cult member chick that is just the worst up to where he kills the cult leader. So this chick is insanely fucking desperate. Early she is all, "what can I do to make you happy" to the leader who is tired of her shit. He is all like, "nothing, everything you do is wrong" and rages out on her. Later, she is the one administering acid to Mandy and abusing her because the cult leader, whom Mandy is not fucking interested in, wants her and shit. They set her up as this pathetic enabler, basically. Pretty stoked to see her go, sure, but it is the scene itself and how fucking sad and pathetic she is that really makes the scene. By this point it is only her and the leader left and she is the last line of defense between him and certain death and she has no chance of physically subduing him or anything. Instead she tries to bone him which is sick. We learn, from her, that dude said she's "the most sensual lover he's ever experienced," and she tries to seduce him. Gross. The next thing we see is Cage going into the cult leader's secluded little meditative room. Cage throws him her head when he comes in. He freaks out as he doesn't want to die. Offers to suck his dick even. But I'm pretty sure he already had a blowjob and Cage tells him "I am your god now," which is baller, in the voice of one of the Cenobites, and crushes his head with his bare hands. Spoiler. Best damn scene of the movie.

So yeah, love the end but because he so easily kills everyone, especially so with that weak ass cult leader, it might come off a little anticlimactic. But regardless of how you come off there, you do get some good lines and shit there though. I'd put the best line in the movie as one from that scene. It comes when the cult leader is trying to save his life and shit. He tells Cage, "you can't kill me, God is in this room." That is when Cage starts talking in parables and shit and hits him with this line:


"A psychotic drowns where the mystic swims. You're drowning. I'm swimming,"

That is some dope shit to say if you are ever in a situation where you are about to kill the leader of a religious cult. It's from Joseph Campbell if it sounds familiar to you.

So... MVP is obviously Cage. Dude can fucking act, he proves. He usually phones it in but he goes all out in this one. During his vision of his girl where he looks all fucking crazy. He whens MVP with that look alone but the whole time he is on screen is pretty sick. Like after his girl gets burned to death and he slips out from the tree he is tied to when he fucking rages and downs a Belushi amount of vodka whilst screaming in emotional pain. That is some real shit. Then when he is talking to his bro, Bill Duke's role, who is a fellow Vietnam vet or something, and he rages like a mad man to him in a way that is barely coherent but gets the point across, "crazy evil," man. His whole performance is intense and bad ass in a way that he never is. Beautiful movie. Fuck.

Also, something I LOLed at was the Cheddar Goblin commercial. This shit is fucking insane. It comes on after Cage comes in from his wife having just been burned to death. Pretty intense shit. That is when Cage, who is soaked in blood, wearing a long-sleeve and underpants of the tighty-whitey persuasion, looks up at the TV and sees this bizarre commercial come on. In it this thing called the Cheddar Goblin pops up from a bowl of pasta as the unhinged mascot for this mac&cheese brand of the same name. He then proceeds to puke mac&cheese all over the heads of the two children eating at the kitchen table. It is fucking insane. Weirdest and most hilarious inappropriate shit I've ever seen in my life. Apparently this was made by some guy named Shane Morton who also worked on "Too Many Cooks" for Adult Swim if you remember that insanity. He came up with Smarf.  Anyway, movie is tits.