Tag is the greatest movie of all time 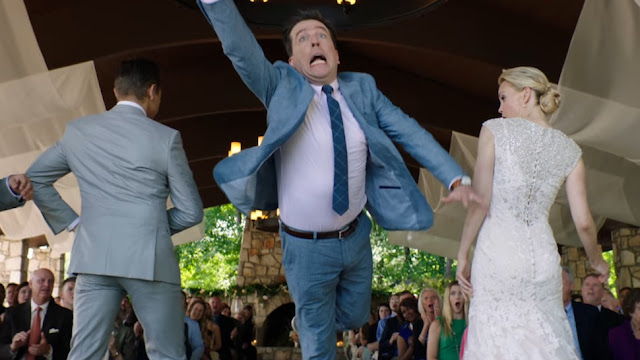 Tag. Was pretty reluctant to see it, honestly. I thought it kinda looked dumb and unfunny. Wrong. In fact, definitely the funniest movie I've seen in the theater going back many years. I am not one to just nervous laugh or whatever. LOLing is pretty rare, in my experience. This had me in tears. Fucking tears. Everyone in the theater had a great fucking time watching it and most of them tagged their way out of the theater on their way to their cars. How this movie isn't fresh on Rotten Tomato or Metacritic or whatever, I have no idea as it is the greatest movie of all time. Also, sort of massive spoiler at the end here.

Rotten Tomato Consensus: For audiences seeking a dose of high-concept yet undemanding action comedy, Tag might be close enough to it.

Pros: Funny as shit. Light and carefree until it's not. Great stoner comedy, for sure. Casting is dope. Surprising amount of action for a movie of this nature. It's a pretty touching movie about bros doing the bro thing. Pretty ladies. Especially that Rashida Jones.

Cons: Gets a little too dark there at the end. 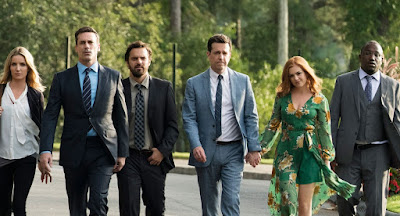 Gist of the movie is that five archetype buds take part in an elaborate, highly competitive annual game of extreme tag that lasts the month of May that takes them all over the county. Directed by first-timer Jeff Tomsic, the film is based on a true story that is way bigger, older, and less intense. Staring in the film are Hannibal Buress as the dumb one, Jon Hamm as the rich CEO one, Ed Helms as the family man, Jake Johnson as the unemployable one that is always stoned, and Jeremy Renner as the personal trainer who has never been tagged. Also in the flick are Isla Fisher from Wedding Crashers (among other things) as Ed Helms's extremely competitive wife and Rashida Jones as the longtime love interest of the CEO and the stoner. She is also a recent widow which the dudes find sort of hot, I think. Sort of sandwiched in is this whole news story angle--whilst writing an article about the CEO one for The Wall Street Journal, a reporter chick played by Annabelle Wallis (whom you may recognize from the Annabelle: Creation POS from last year or that Tom Cruise The Mummy movie) witnesses some of the tag business going down and decides to, uh, tag along to compose her Pulitzer winning story. 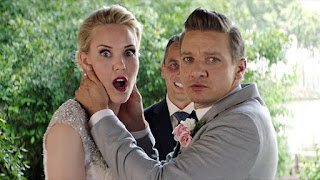 Saw this like a month ago but three scenes still stand out as exceptional. The first comes early in the movie which does a good job of illustrating the lengths these dudes will go to smack one of their brethren. The first one features Helms's character taking time off from his white collar  job as a professor or whatever and getting hired on at Hamm's company as a janitor. Helms then dons a disguise and works for a solid week, learning the ends and outs of Hamm's schedule before backing him into a glass room during the interview with the WSJ reporter. Once finally cornered, Hamm tries to breakout by throwing a chair through the glass, which doesn't work. The second is the scene where they try to tag Renner at his house but it appears that he is at Helms's childhood home, threatening to jerk off on his favorite stuffed animal... But it turns out he has constructed an exact model of Helms's room in his basement which is fucking crazy. And the final one is the wedding scene which is supposed to be a time when tagging is off limits. There is a lot of solid build up as to if they are going abide by this truce time or what which you know they don't if you watched the goddamned trailer, spoiler. In each of these scenes it not the actions themselves that make all the shit LOL funny but the dialogue and the interactions among the characters. You likely just have to see them. Trust me.

Only thing I didn't really like about the movie is that it gets pretty heavy out of nowhere. Suddenly one of them, Helms, is dying. "Fuck, I'm not ready for this shit," I thought. Not going to be around next year, so wanted to get Renner this year was the gist here which everyone think might end up being a ploy but isn't. Just some dark shit to end this otherwise light movie on. WTF?

MVP of the flick is Jake Johnson as Randy "Chilli" Cilliano who is the lovable, unemployed stoner, loser guy. He ends up beating out Hamm for Jones's affections, generally doesn't fall for any of the various tag ruses, and seems like a super fun dude to smoke a bowl with. I'm probably a little biased though because I basically am that guy. So take that with a grain or a nug or whatever your preferred nomenclature.