Feast is the greatest movie of all time

Feast is some great comedy horror. The monster flick was featured on season three of Project Greenlight—I never watched so some of the details might be a bit fuzzy here—which was a documentary series on HBO and later Bravo where Ben Afflect and Matt Damon (with the help of, ahem, Harvey Weinstein) would pluck first-time directors out of obscurity and fund their idea for a feature film. So the movie had that going for it and apparently the making of the low-budget film made for low-budget film. I may have to check it out as this is the greatest movie of all time.

Rotten Tomato Consensus: Director Gulager makes the most of what he's given; the resulting Feast offers up some surprisingly tasty -- if far from nourishing – morsels.

Pros: Original, made me laugh out loud at least once, was super disgusting, and features a solid list of Hollywood D-Listers. The monsters look surprisingly dope in a 1990s cheesy sort of way.

Cons: Little too much shaky cam. Drags on (towards the end especially).

Feast was made by one John Gulager (son of Clu who is one of my faves and plays the bartender in this movie) and is about a ragtag group of barflies in a country tavern who are forced to fight for their lives against a family of alien, demon things hell bent on eating them. The movie spawned two sequels, Feast 2: Sloppy Seconds and Feast III: The Happy Finish that came out in 2008 and 2009 respectively.

Lot to like about this flick. Doesn't fuck around early when it gives us everything you need to know about each of the characters in these three-second backstory cards with each of their nicknames, job/fun fact, and life expectancy. For example, the old pickled drunk lady who goes by “Grandma” has the following pop up on the screen when she shows up for the first time: “Fun Fact: Blew Mick Jagger ... recently. Life Expectancy: Maybe dead already.” Lot of info in no time. Love that shit. 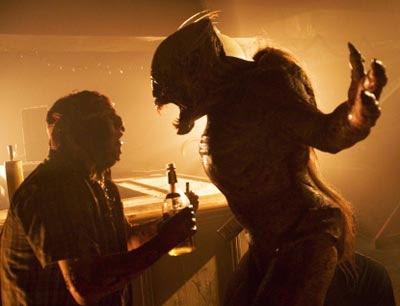 As for the D-Listers, we get Krista Allen who was the enfamous Billie Reed on Days of Our Lives, rapper Anthony 'Treach' Criss from Naughty by Nature, Judah Friedlander who was Frank Rossitano / Streak in 30 Rock, Balthazar Getty who was the lead in Lost Highway and David Foster Wallace called out as a huge piece of shit in one of my favorite essays on David Lynch, Gulager's father Clu Gulager as Bartender who is a great character guy with some real horror chops having played amazing roles in two of the most ridiculous movies of all time having played the dad in A Nightmare on ElmStreet 2: Freddy’s Revenge and the iconic Burt in The Return of the Living Dead, Jason Mewes who is Jay in all the Jay and Silent Bob movies (he plays himself), one of my all-time favorite people Henry Rollins and I go crazy for whenever I see him in anything as Coach, Jenny Wade who plays Honey Pie and is the hot one (you might recognize her from American Horror Story, The Good Guys, Grimm, or Mad Men), and Duane Whitaker who was the fat rapist in Pulp Fiction as the Boss Man.

The first thing we get after the little intros, spoiler, is “Hero”, played by one Eric Dane, popping in saying stuff like “listen and do everything I say if you want to live,” and then immediately getting decapitated by a monster. It was a great little twist. For the next few minutes it is just pure chaos which is exactly how it would happen IRL when some shit hits the fan like that. During that time we get a bunch of carnage with several characters dying off early including Treach and Jason Mewes who gets his face ripped off. Also during that time Boss Man gets his foot blown off as he bones Tuffy upstairs when Hero’s head is getting bitten off. Tuffy, who has a young child, has her kid hide in the closet. We are then introduced to Heroine who yells that everyone needs to stay downstairs. Tuffy freaks out and runs to where her kid was. He ain’t there. But then they find him. Aw. Tuffy is all, “I want let anything happen to you, ever, I promise,” at the exact moment she finishes, one of the monsters busts in and eats the kid in like two gulps. It is in-fucking-sane and darkly hilarious.

Lots of other funny shit in there like using Rollins’s head as a battering ram, you sort of have to be there, monster-on-moster sex, and later cutting off its dick and balls via door slam, its pretty gross, and a great line at a slower part of the movie with “It has been a long time since someone has been horribly killed; seems like an opportune time for someone to get offed,” when they are trying to get people to do some shit that is dangerous. Check this shit out. It’s comedy/horror gold.